Leon O. Chua. Leon Ong Chua (/ˈtʃwɑː/; Chinese: 蔡少棠; pinyin: Cài Shàotáng; Pe̍h-ōe-jī: Chhòa Siáu-tông; born June 28, 1936) is an IEEE Fellow and a professor in the electrical engineering and computer sciences department at the University of California, Berkeley, which he joined in 1971. 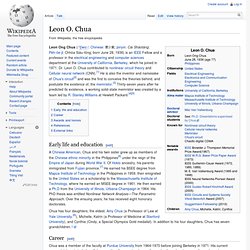 Dr. Leon O. Chua contributed to nonlinear circuit theory and Cellular neural network (CNN).[1] He is also the inventor and namesake of Chua's circuit[2] and was the first to conceive the theories behind, and postulate the existence of, the memristor.[3] Thirty-seven years after he predicted its existence, a working solid-state memristor was created by a team led by R. Stanley Williams at Hewlett Packard.[4][5] Early life and education[edit] A Chinese American, Chua and his twin sister grew up as members of the Chinese ethnic minority in the Philippines[6] under the reign of the Empire of Japan during World War II. 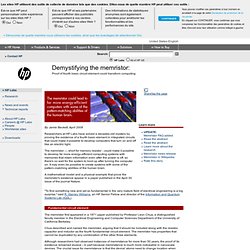 One goal of this work has been to move computing beyond the physical and fiscal limits of conventional silicon chips. For decades, increases in chip performance have come about largely by putting more and more transistors on a circuit. Higher densities, however, increase the problems of heat generation and defects and affect the basic physics of the devices. "Instead of increasing the number of transistors on a circuit, we could create a hybrid circuit with fewer transistors but the addition of memristors - and more functionality," Williams says. Alternately, memristor technologies could enable more energy-efficient high-density circuits. The Miraculous Memristor - Logic And Memory Plus Going Beyond Mo. Posted by Tom Foremski - April 19, 2010 I recently visited HP Labs and spoke with Stan Williams, senior fellow at Hewlett-Packard and director of Quantum Science Research, about an incredible semiconductor device -- the memristor.

Until fairly recently, the memristor, short for memory resistor, was a mythical electronic component. It had been predicted to exist by a mathematician, Leon Chua, a professor at UC Berkeley, in an 1971 paper. No one had made a memristor until Stan Williams and his team cracked it in 2008. The memristor can: - store data like DRAM or Flash but it doesn't require any energy to maintain the data storage. - the memristor chips can be laid down in layer upon layer upon layer, creating three-dimensional structures that can store and process data. - the memristor is easy to make and completely compatible with today's CMOS chip making processes. - it can be scaled to very small geometries without losing its properties.

Tech. Flash. Text Fields and Formats. By Blue_Chi | Flash CS3 | ActionScript 3.0 | Beginner This tutorial will teach you the basics for dealing with text and text formatting in ActionScript 3.0. 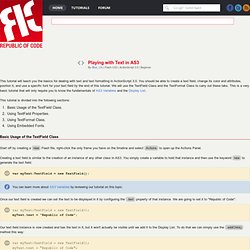 You should be able to create a text field, change its color and attributes, position it, and use a specific font for your text field by the end of this tutorial. We will use the TextField Class and the TextFormat Class to carry out these taks. This is a very basic tutorial that will only require you to know the fundamentals of AS3 Variables and the Display List. 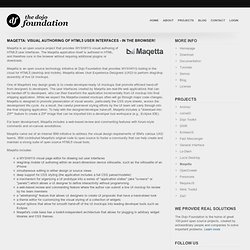 Maqetta is an open source project that provides WYSIWYG visual authoring of HTML5 user interfaces. The Maqetta application itself is authored in HTML, and therefore runs in the browser without requiring additional plugins or downloads. Maqetta is an open source technology initiative at Dojo Foundation that provides WYSIWYG tooling in the cloud for HTML5 (desktop and mobile). Maqetta allows User Experience Designers (UXD) to perform drag/drop assembly of live UI mockups.

One of Maqetta's key design goals is to create developer-ready UI mockups that promote efficient hand-off from designers to developers. Files. Free Programs.

Kiss the Grid Goodbye: Power Your Home with a Bloom Box! Fuel cells have been a tantilizing technolgy for decades - powering space vehicles, but always a little out of reach for domestic or commercial use. I worked with Greenopolis Partner Plug Power for years - working to provide clean on site energy from hydrogen powered fuel cells. Now there’s the Bloom Box. That’s not a typo for a new carry-on-your shoulder stereo system. The Bloom Box is a refrigerator-sized box that can power your whole house, store or business. Bloom Energy is a venture capital funded firm that builds the “Bloom Box”- an appliance sized unit that houses fuel cells running on natural gas, landfill gas, bio-gas or solar power. Google has been powering a datacenter with 4 Bloom Boxes running on natural gas for the past year and a half. eBay has 5 of them in San Jose, which they claim have saved them $100,000 in energy costs over the past 9 months. The Bloom Box debuted on CBS’ 60 Minutes last night.