The Sharing Economy Is About Desperation. Wired's cover story this month is about the rise of the "sharing economy" — a Silicon Valley–invented term used to describe the basket of start-ups (Uber, Lyft, Airbnb, et al.) that allow users to rent their labor and belongings to strangers. 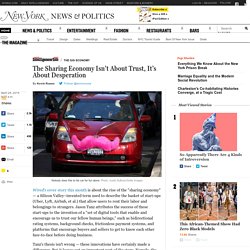 Jason Tanz attributes the success of these start-ups to the invention of a "set of digi­tal tools that enable and encourage us to trust our fellow human beings," such as bidirectional rating systems, background checks, frictionless payment systems, and platforms that encourage buyers and sellers to get to know each other face-to-face before doing business. Tanz's thesis isn't wrong — these innovations have certainly made a difference. But it leaves out an important part of the story. Social Enterprise in Action: Sharing Experience to Build a Stronger Social Economy (Oldham) A free all-day event with guest speakers and workshops for social enterprises and social entrepreneurs in Oldham. 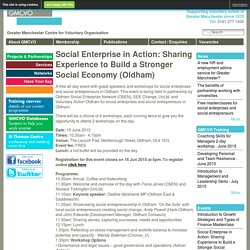 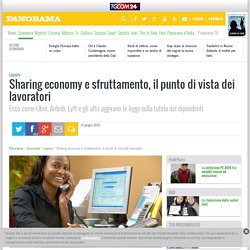 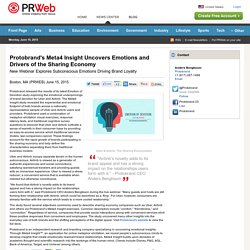 The Meta4 Insight study revealed the experiential and emotional footprint of both brands across a nationally representative sample of Uber and Airbnb users and providers. Protobrand used a combination of metaphor elicitation visual exercises, response latency tests, and traditional cognitive survey questions to discover that Uber and Airbnb cultivate a sense of warmth in their consumer base by providing an easy-to-access service which traditional services (hotels, taxi companies) cannot.

How will the sharing economy alter job training? Samir Varma points my attention to this WSJ Christopher Mims piece: Right now a college student in Sweden—let’s call him Sven—has a rather unusual summer job. 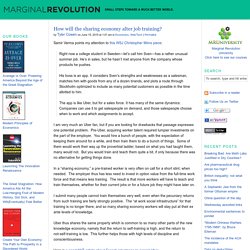 He’s in sales, but he hasn’t met anyone from the company whose products he pushes.His boss is an app. It considers Sven’s strengths and weaknesses as a salesman, matches him with goods from any of a dozen brands, and plots a route through Stockholm optimized to include as many potential customers as possible in the time allotted to him.The app is like Uber, but for a sales force. It has many of the same dynamics: Companies can use it to get salespeople on demand, and those salespeople choose when to work and which assignments to accept. I am very much an Uber fan, but if you are looking for drawbacks that passage expresses one potential problem. Sharing economy o concorrenza sleale? Breve commento ragionato al caso “Uber pop” - www.bollettinoadapt.it. In the Sharing Economy, Could Reputation Replace Regulation? The rise of peer-to-peer networking and the burgeoning “sharing economy” was the topic du jour Tuesday at a Federal Trade Commission (FTC) workshop in Washington, DC, where participants explored whether any new regulation is needed. 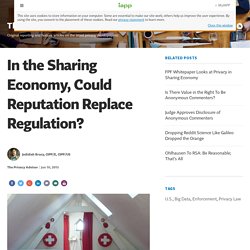 In a wide-ranging conversation covering rapidly changing business models, potential regulatory obligations and consumers’ increasing dependence on reputational feedback mechanisms, economists, industry representatives and academics hashed out what is clearly a complex but innovative sector of the modern economy. “For a long time, trust was provided through community,” said New York University Stern School of Business Prof. Arun Sundararajan. The sharing economy will soon change everything about urban transport: Crowley in the Globe. The sharing economy is already disrupting the taxi industry. 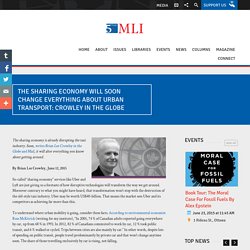 Soon, writes Brian Lee Crowley in the Globe and Mail, it will alter everything you know about getting around. By Brian Lee Crowley, June 12, 2015 So-called “sharing economy” services like Uber and Lyft are just giving us a foretaste of how disruptive technologies will transform the way we get around. Moreover contrary to what you might have heard, that transformation won’t stop with the destruction of the old-style taxi industry. Uber may be worth US$40-billion. To understand where urban mobility is going, consider these facts. Why? Finally, the average car is parked 23 hours out of 24. Don't Fall for the Uber-fication of Sales. Conventional wisdom: If you've got a smart phone, you can outsource a sales force. 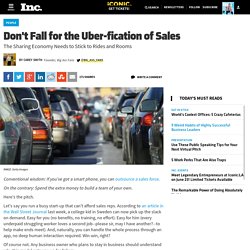 On the contrary: Spend the extra money to build a team of your own. Here's the pitch. Let's say you run a busy start-up that can't afford sales reps. Crowdforcing: When What I “Share” Is Yours. Among the many default, background, often unexamined assumptions of the digital revolution is that sharing is good. 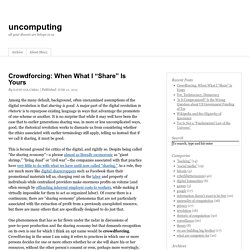 A major part of the digital revolution in rhetoric is to repurpose existing language in ways that advantage the promoters of one scheme or another. It is no surprise that while it may well have been the case that to earlier generations sharing was, in more or less uncomplicated ways, good, the rhetorical revolution works to dissuade us from considering whether the ethics associated with earlier terminology still apply, telling us instead that if we call it sharing, it must be good. This is fecund ground for critics of the digital, and rightly so. Despite being called “the sharing economy”—a phrase almost as literally oxymoronic as “giant shrimp,” “living dead” or “civil war”—the companies associated with that practice have very little to do with what we have until now called “sharing.” 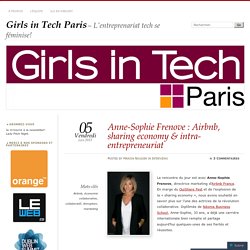 Imagine going to a shop, borrowing anything you like, and returning it when you're finished. This is the idea behind SHARE: a Library of Things. Opened in late-April in Frome, a town in northeast England, the aim of SHARE is to enable people to spend less, waste less, and connect more. The first of its kind in the U.K., SHARE has already sparked interest from other communities. “We have daily positive comments about the idea [and] the community seems to be in full support,” says Charley Murrell, one of the project managers of SHARE. “We have also been contacted by various people from over the country wanting to replicate a similar project and asking for advice.”

Murrell, along with seven other young adults, planned, researched and created the shop in eight weeks as part of an intensive program designed to teach them about social enterprises. As The Sharing Economy Goes Mainstream, Most Cities Want To See It Grow. A decade ago, the fledgling sharing economy existed on the fringes. The first large-scale bike-share system in the world had just launched; now bike sharing exists in over 700 cities. Zipcar, one of the largest U.S. companies in the space at the time, only had 50,000 members.

Today, Uber is giving over 1 million rides a day. Collectively, Uber and Airbnb are valued at over $50 billion. A recent survey looked at how cities are reacting to the shift and how government attitudes are changing. 'Sharing economy' won't become widespread because people crave their own material goods, says study - Science - News. The internet has led to the emergence of numerous sites that allow people to rent, borrow, lend, swap and share products rather than buying new ones. However, such schemes will never replace purchase capitalism because people are culturally programmed to amass as many possessions as possible, says a new report by Nottingham Trent University, published in the Journal of Cleaner Production. “The sharing economy is a credible way to help tackle today’s consumer society,” said Laura Piscicelli, a researcher at the university.

“What we’ve identified in this study, though, is that people’s individual values may prevent ‘collaborative consumption’ from becoming mainstream,” she added. Ms Piscicelli said ride-sharing and clothes swapping were on the increase, and some renting and second-hand retail websites had been successful. Other sites, like TaskRabbit, have enjoed some success by allowing people to outsource household chores. The sharing economy comes to architecture with Fold Co-working. Co-working started as as a way of providing a shared workspace for freelancers and homeworkers, but has really evolved into a way of developing communities of like-minded people who want to share ideas as well as resources.

It would seem to be a no-brainer for design professionals; many work solo and don't make a lot of money, and it is hard to make a good impression when your drawings stick to the jam left on the dining room table. Fold is a new co-working space in Toronto developed for "professionals working within architecture, landscape and interior design. " How Investors are Sharing their Money into the Collaborative Economy. The raw data for this article is available in a publicly-shared database in this Google Sheet, which you can access to see additional details. VCs, investors, and banks have increased their bets on the Sharing/ Collaborative Economy in greater amounts than ever before. The Collaborative Economy is an economic model that uses commonly available technologies to enable people to get what they need from each other.

You’ve likely heard of the sharing economy, crowdfunding, P2P lending, the Maker Movement and cryptocurrencies. Each of these is a part of this emerging economy. I’ve met with many investors to find out what they like about this space. While dozens of smaller startups are winning A rounds in the size of $2-10m on average, there have been two extremely large funding into startups: Uber has raised over $2.7B resulting in a market valuation of $41B (not including the recent debt financing), and a recent round funding of $530M into Lyft, bringing their valuation to over $2B.

What will the "sharing economy" mean for health care? Boomers have marveled at the return of bellbottoms, skinny ties, mullets, and moustaches. 5 Things You Never Knew About the Sharing Economy. In TIME’s new cover story, Joel Stein takes readers on a wild ride through the sharing economy—renting out his car, chauffeuring people around late into the night, making dinner for strangers and even toying with the idea of doing other people’s laundry.

To read the full post, please subscribe to TIME. Here are five big takeaways about why we trust strangers with our stuff, our lives and our homes. These companies are more successful than investors ever thought possibleAirbnb was rejected by almost every venture capitalist it pitched itself to. But now an average of 425,000 people use it every night worldwide, and the company is valued at $13 billion, almost half as much as 96-year-old Hilton Worldwide. Meal Sharing is the Newest Player in the Sharing Economy. Nobody Really Knows What To Do About Regulating The Sharing Economy. Non solo Uber: la via italiana alla sharing economy. As The Sharing Economy Goes Mainstream, Most Cities Want To See It Grow. 5 Marketing Lessons From The Sharing Economy. The sharing economy, simply put, is the phenomenon where people are increasingly willing to share their home, car, clothing, goods, services—almost anything—online.

It’s having a major disruptive influence on the way business works today. New consumer-driven businesses are cropping up quickly and taking a significant share of revenue from traditional counterparts. Just look at the hotel industry—it’s taking a hit from Airbnb. Uk.businessinsider. The dangers of the Sharing Economy (3): A Platform for (Cooperative) Revolution. UberPop, parla la manager italiana: "Non siamo pirati, facciamo sharing economy" Benedetta Arese Lucini, General manager di Uber Italia, parla dopo la decisione del giudice che ha riconfermato il blocco di UberPop che resta così fuorilegge. Airbnb has a dead people problem: The morbid side of the sharing economy. A few months back, I rented a car via Getaround, a company that’s like Airbnb for vehicles. Startup of the week: ByeBuy. Why the sharing economy is doomed without trust. How the Sharing Economy Disrupts Law, Transportation & Hospitality. What does the spectacular rise of the sharing economy mean for the environment?

Debating the Sharing Economy. Like Uber, but for Marge Simpson. On Freedom & the Sharing Economy. "London is apparently littered with bottles of discarded Uber piss." So why are cab drivers peeing in bottles? The Servitude Bubble — Bad Words. How Airbnb and Lyft Finally Got Americans to Trust Each Other. The Post-Ownership Society by Monica Potts. Uber 'micropreneurs' signal the end of work as we know it. Helpling cleans up in Singapore with Uber-like 'sharing economy' model - CNET.