Going 'Clear': New App Promises To Erase All Those Tweets You Wish You Never Sent. By Jessica Goldstein. 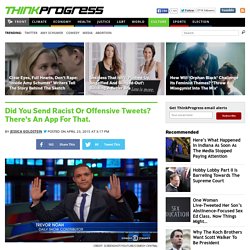 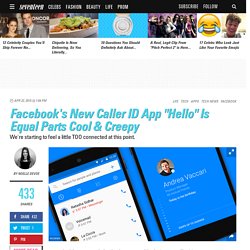 They've got you filterizing (is that a word because it toes should be) and posting every single selfie on Instagram and totally stalking your ex's FB profile to see if he's really moved on. They launched their game-changing messenger app recently on browsers too (as if you weren't already hooked on messenger-ing on your phone). Now, Facebook is taking over your phone completely with their new Hello app, which they announced today. It's a caller ID app that connects with your Facebook account so you can see who's calling you, and makes it easier to block unwanted calls, and search for your fave people and places.

Basically, when you get a call, Hello shows you the info about the person who's calling you even if you don't have their number on your phone (but only the info they've made public on Facebook, so there's no need to freak out about your privacy or anything). New app launched to fight xenophobia - Times LIVE. The We Are Africa app captures geographic locations of users as well as personal information to log incidents of xenophobia. 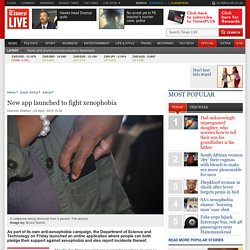 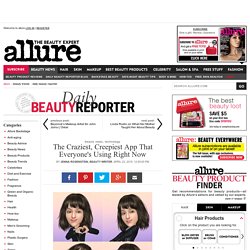 Heard of it? Unless you follow a handful of celebrities (Miley Cyrus, Pia Mia, Kat Dennings) that posted about it—you probably haven't...yet. And you probably won't believe me when I describe it to you. The app is strange, to say the least. It's somehow both incredibly fun and terrifyingly creepy. MyIdol (all one word, if you're searching in the App Store) allows you to upload a selfie and turn your face into a three dimensional cartoon character that can be manipulated and toyed with (that's my avatar in the image above). If you want to give it a whirl, the app is totally free to download. Report: Mobile health app companies raised $220 million in Q1. Apps to help manage chronic conditions and other illnesses dominated the $220 million raised across 35 deals, according to a new report sizing up the first quarter of 2015 by Mercom Capital. 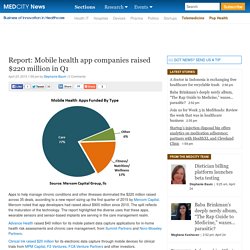 Mercom noted that app developers had raised about $900 million since 2010. The split reflects the maturation of the technology. The report highlighted the diverse uses that these apps, wearable sensors and sensor-based implants are serving in the care management realm. Advance Health raised $40 million for its mobile patient data capture applications for in-home health risk assessments and chronic care management, from Summit Partners and Noro-Moseley Partners. 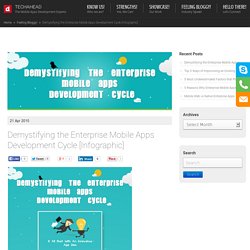 Smartphone-Only Bank NUMBER26 Gets $10.8M Deposit. NUMBER26, the startup bank that operates entirely on a smartphone, has pulled in €10 million ($10.8 million) in funding. 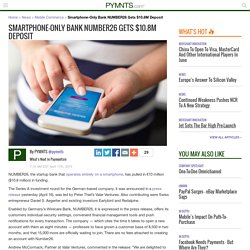 The Series A investment round for the German-based company, it was announced in a press release yesterday (April 16), was led by Peter Thiel’s Valar Ventures. Also contributing were Swiss entrepreneur Daniel S. Aegerter and existing investors Earlybird and Redalpine. Enabled by Germany’s Wirecare Bank, NUMBER26, it is expressed in the press release, offers its customers individual security settings, convenient financial management tools and push notifications for every transaction.

The company — which cites the time it takes to open a new account with them as eight minutes — professes to have grown a customer base of 8,500 in two months, and that 15,000 more are officially waiting to join. New Google algorithm to favor mobile sites. Alibaba’s Vision For Merchants Without PCs. Alibaba wants retailers to stop investing in personal computers and instead run operations entirely on the smartphone. 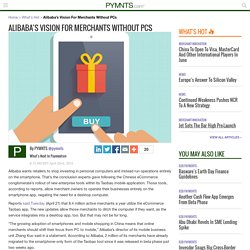 That’s the conclusion experts gave following the Chinese eCommerce conglomerate’s rollout of new enterprise tools within its Taobao mobile application. Those tools, according to reports, allow merchant owners to operate their businesses entirely on the smartphone app, negating the need for a desktop computer. Reports said Tuesday (April 21) that 8.4 million active merchants a year utilize the eCommerce Taobao app. The new updates allow those merchants to ditch the computer if they want, as the service integrates into a desktop app, too. But that may not be for long. “The growing adoption of smartphones and mobile shopping in China means that online merchants should shift their focus from PC to mobile,” Alibaba’s director of its mobile business unit Zhang Kuo said in a statement.

The computerless merchant may not be a Chinese-only phenomenon, either. Google Goes Wireless With “Project Fi” Google’s empire has expanded into the wireless business. 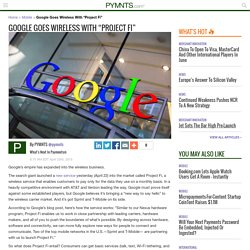 The search giant launched a new service yesterday (April 22) into the market called Project Fi, a wireless service that enables customers to pay only for the data they use on a monthly basis. In a heavily competitive environment with AT&T and Verizon leading the way, Google must prove itself against some established players, but Google believes it’s bringing a “new way to say hello” to the wireless carrier market. And it’s got Sprint and T-Mobile on its side. According to Google’s blog post, here’s how the service works: “Similar to our Nexus hardware program, Project Fi enables us to work in close partnership with leading carriers, hardware makers, and all of you to push the boundaries of what’s possible. By designing across hardware, software and connectivity, we can more fully explore new ways for people to connect and communicate.

So what does Project Fi entail? Mobile’s Impact On Path-To-Purchase. Path-to-purchase. 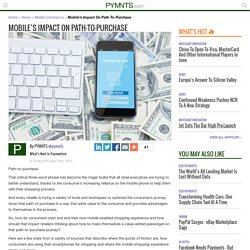 That critical three-word phrase has become the magic bullet that all retail executives are trying to better understand, thanks to the consumer’s increasing reliance on the mobile phone to help them with their shopping process. And every retailer is trying a variety of tools and techniques to optimize the consumer’s journey down that path-of-purchase in a way that adds value to the consumer and provides advantages to themselves in the process. So, how do consumers start and end their now mobile-enabled shopping experience and how should that impact retailers thinking about how to make themselves a value-added passenger on that path-to-purchase journey? Here are a few stats from a variety of sources that describe where the points of friction are, how consumers are using their smartphones for shopping and where the mobile shopping experience starts and stops.

Shyp: Thousands are bypassing the post office with this app - Apr. 21, 2015. That's why prominent venture capital firm Kleiner Perkins Caufield & Byers just led a hefty new round of $50 million funding in Shyp. The startup, which launched in March 2014, takes care of the pesky logistics involving with shipping: from packaging to pickup to returning. Using the Shyp app, users can take a picture and click a few buttons. Like magic, or within 20 minutes, the package will be taken care of ... meaning one of Shyp's couriers will pick it up, package it and ship it off using the best carrier option: FedEx, DHL, UPS or the U.S. Postal Service. Selfie App Shots Moves Beyond Bieber With $8.5 Million in Funding. Case Study: How Localization Can Boost Your Midcore Game.

Making deep games accessible to more people through language. Mobile games are a growing genre. But as people raised on AAA-quality console games start to transition to the small screen, they bring their high expectations with them. GetReal Says Stop Messaging, Just Meet. The pendulum swings of technology trends have been well chronicled over the years. Such swings suggest the huge popularity of real-time messaging apps should spark an opposite digital movement that — paradoxically — seeks to encourage more face-to-face human interactions with the help of apps. Stranger things, and all that… One recent example pushing in this direction is U.K. dating app rendeevoo, which aims to ‘fix’ the tedium of Tinder by excising the ability to IM a match before meeting up.

The app is just an interface for agreeing or declining prospective dates. Well, here’s another example: called GetReal, this just-launched iOS app wants users to spend more time in each others’ company, and less with messaging apps. GetReal is not targeting a single use-case, like dating, but has the broad-brush aim of help people meet others in their immediate vicinity for a variety of reasons. Of course, being freshly launched, GetReal’s immediate hurdle is the network effect. Google Will Rank Your Site Higher If It's Mobile Friendly.

Big changes to Google’s search algorithms are coming: beginning April 21, the company will increase the ranking of sites that are mobile-friendly and surface app results much higher. The company says that the change will have a “significant impact” on all mobile searches in all languages worldwide, but as a result Google says that users will find higher quality results. Along with this change, Google will start to use more information from indexed apps as a factor when ranking search results for users that are signed-in and have the app installed. Google Mobilegeddon - Business Insider. New app calculates prayer times, mosque and halal food locations for Muslim travellers. Cape Town – A new mobile app will help Muslim travellers establish prayer times, locate mosques and find halal food more easily while away from home. Going by the name HalalTrip, the app has integrated the latest available technologies to give Muslim travellers a simple way to find prayer times and locations whether on air, land or sea.

With just one click, the new feature instantly calculates the prayer times for the current location, the distances for nearby mosques and the time it will take to reach them. Controversial After School App Relaunches With New Safety Features And Zero Tolerance For Hate. After School is back and ready to try again. Best Free Apple Watch Apps: See iPhone battery life on Apple Watch. The Apple Watch isn’t even available for purchase yet, but we’re already seeing the App Store flooded with updates and new apps that are focused on the Apple Watch.

New app makes dog walking a boon for animal shelter. Dog owners, listen up. If you aren't already making it a point to walk your pup, there's another incentive to grab a leash and head outside. Fairborn police unveil new mobile app. The Fairborn Police Department has launched a mobile application that allows residents to view crime maps, identify wanted or missing persons and receive emergency alerts from the department.

How to Ensure 100% Success Rate in Mobile App Development Projects? - Designsave.com. Thinking Like An App Designer. Appcircus » Blog Archive » The top 10 mhealth Apps will pitch live on stage in Berlin at the biggest App show on Earth. Unsure About Your Baby’s Poops? There’s an App for That. New local app helps identify amphibians. Weight loss app shows what you would look like after dropping pounds. Rad New App Everyone Needs to Start Traveling With  Smartphone app that diagnoses cervical cancer, lymphoma invented at Harvard Medical School. Path’s New App Kong Is A Selfie GIF Creation Machine. Got spare change? This new app will invest it into Bitcoin for you.

The best apps you might have missed this week. Apps aim to discourage distracted driving. Coachella and Beyond: 7 Apps and Gadgets for Music Festivals. App reviews: Periscope, Twitter’s new live-streamer, and Dubsmash, for soundtracks. It’s Siri for sex: This app tells you how to get down and dirty. 5 can't-miss apps: Snapseed, Mixkit and more. DirecTV's app is ready to stream 90 channels anywhere you go. Look slimmer with this new app. Will new app Rook be a useful pawn in the publishing game? Which last minute hotel booking app should you download? Building an app with Ampersand.js. Are The Fortune 500 Ready For Mobile Search? What is App Remarketing? Latest Apps Help You Plan Day Trips In Connecticut And Neighoring States. Intellicare app is your new personal therapist. Clean Reader e-book app ushers in a new literary age: squeaky clean.