A Touchscreen From 1982, That Could Kill With A Single Finger Press. Over the pond here in the UK we used to have a TV show called Tomorrow’s World, It was on once a week showing all the tech we would have been using in 10 years time (or so they said). 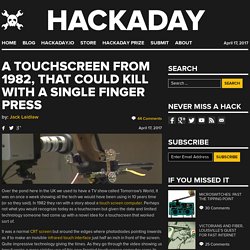 In 1982 they ran with a story about a touch screen computer. Perhaps not what you would recognize today as a touchscreen but given the date and limited technology someone had come up with a novel idea for a touchscreen that worked sort of. It was a normal CRT screen but around the edges where photodiodes pointing inwards as if to make an invisible infrared touch interface just half an inch in front of the screen. Quite impressive technology giving the times. Dreams Really Do Come True: A Cloud That Rains Real Tequila - Geekologie. These are a couple shots and videos of the Tequila Cloud installed in Berlin, Germany by the Mexican Tourism Board to encourage tired-of-the-rainy-winter Germans to vacation in the land of sun and tequila. 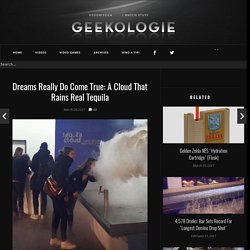 The cloud sculpture uses ultrasonic humidifiers to vibrate tequila at a frequency that turns it into a mist, which then cascades out of the cloud and into the mouth or shot glass of anybody waiting below. Trying to get drunk in a hurry and don't have time to stand around collecting tequila mist? No worries, they also installed a tap that pours straight tequila. Now you're talking! And by talking i mean slurring horribly. Keep going for the video. Thanks to Jodie, who agrees if clouds really rained tequila, we'd both live in Seattle. Read More:booze, chug it! Safe Cracking is [Nate’s] Latest R&D Project. We love taking on new and awesome builds, but finding that second part (the “awesome”) of each project is usually the challenge. 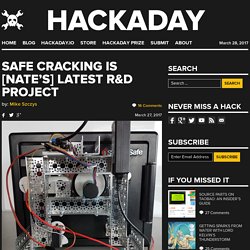 Looks like [Nathan Seidle] is making awesome the focus of the R&D push he’s driving at Sparkfun. They just put up this safe cracking project which includes a little gamification. The origin story of the safe itself is excellent. [Nate’s] wife picked it up on Craig’s List cheap since the previous owner had forgotten the combination. We’ve seen enough reddit/imgur threads to not care at all what’s inside of it, but we’re all about cracking the code. Science behind Railgun, ElectroBOOM Style. Is This What Quantum Mechanics Looks Like? How to Levitate 100lbs. Fluid-filled coffee table in motion. Relay Computing. Recently, [Manuel] did a post on making logic gates out of anything. 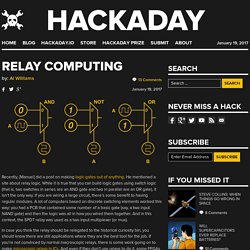 He mentioned a site about relay logic. While it is true that you can build logic gates using switch logic (that is, two switches in series are an AND gate and two in parallel are an OR gate), it isn’t the only way. If you are wiring a large circuit, there’s some benefit to having regular modules. A lot of computers based on discrete switching elements worked this way: you had a PCB that contained some number of a basic gate (say, a two input NAND gate) and then the logic was all in how you wired them together. Supercharged, Fuel Injected V10 Engine, at 1/3 Scale. Nearly three years in the making, behold the raw power and precision of this 1/3-scale V10 engine. 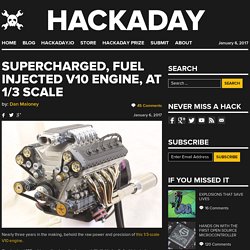 Coming in at 125 cubic centimeters displacement, [Keith Harlow]’s fuel injected masterpiece isn’t too far from the size of some motor scooter engines. We doubt the local Vespa club would look upon it as legit mod, but we’d love to see it. Diy Desk Lamp With Concrete Base - Made With Simple Hand Tools. Worth the read: My new favorite post from r/nosleep. The Internet map. Voice Activated Fireplace Is As Cool As It Gets. A fireplace can add a cozy, relaxed atmosphere — and a touch of style — to any home. 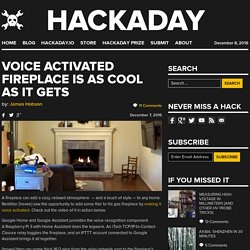 Redditor [hovee] saw the opportunity to add some flair to his gas fireplace by making it voice activated. Check out the video of it in action below. Google Home and Google Assistant provides the voice recognition component. A Raspberry Pi 3 with Home Assistant does the legwork. An iTach TCP/IP-to-Contact-Closure relay toggles the fireplace, and an IFTTT account connected to Google Assistant brings it all together. [hovee] then ran some thick 16/2 wire from the relay network port to the fireplace’s remote receiver circuit to actually turn it on.

Once done, all you need to do is kick back with your favorite beverage in the lap of home automated luxury. [via /r/homeautomation] Making-Of Sea Shell Sand Clock. The year is coming to an end, the Holiday season is approaching. 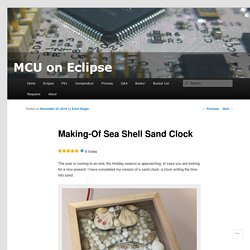 In case you are looking for a nice present: I have completed my version of a sand clock: a clock writing the time into sand: Sandclock If you are interested to build your own version, I have documented the different steps with tips and tricks… Bus Pirate v3.6 (THM180C4M) – Hackaday Store. Hackaday Review Bus Pirate v3 is a universal bus interface that talks to electronics from a PC serial terminal. 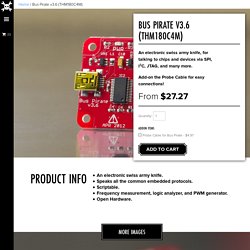 Get to know a chip without writing code. Poke and prod the inner workings of a sensor without wiring it up to a microcontroller. Eliminates a ton of early prototyping effort with new or unknown chips. The cinematography from the 1927 film "Wings" is amazing. Worldbuilding Stack Exchange. How Scary is the VR Game Boogeyman?