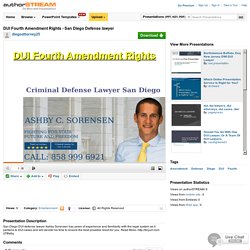 How You Can Be Charged With a Marijuana DUI in California - Reviewed by San Diego Drug Lawyer. As marijuana becomes more and more legal in states throughout the nation, including California, the more marijuana exists as an issue as it relates to drivers on the roads. 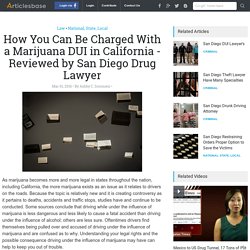 Because the topic is relatively new and it is creating controversy as it pertains to deaths, accidents and traffic stops, studies have and continue to be conducted. Some sources conclude that driving while under the influence of marijuana is less dangerous and less likely to cause a fatal accident than driving under the influence of alcohol; others are less sure. What the Fourth Amendment Means in a DUI Case – Discussed by a San Diego DUI Defense Lawyer by Ashby Sorensen. By Ashby Sorensen Criminal Defense Lawyer in San Diego If you have been pulled over or arrested for DUI you may understand the fear and stress that accompany this type of stop by law enforcement. 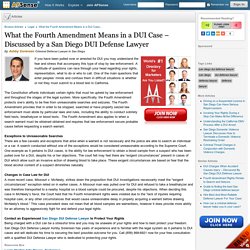 A multitude of questions can race through your head regarding your rights, representation, what to do or who to call. One of the main questions that enter peoples’ minds and confuse them in difficult situations is whether or not they must submit to a blood test in California. The Constitution affords individuals certain rights that must be upheld by law enforcement and throughout the stages of the legal system.

More specifically, the Fourth Amendment protects one’s ability to be free from unreasonable searches and seizures. Can Law Enforcement Draw My Blood Without Consent? Answered by San Diego Defense Attorney. In the news and in our own lives we often hear of stories where a person is allegedly intoxicated, whether from drugs or alcohol, and the police want a sample of their blood to test for the presence of substances. 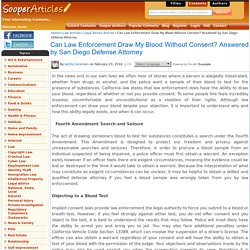 California law states that law enforcement does have the ability to draw your blood, regardless of whether or not you provide consent. To some people this feels incredibly invasive, uncomfortable and unconstitutional as a violation of their rights. Although law enforcement can draw your blood despite your objection, it is important to understand why and how this ability legally exists, and when it can occur. Fourth Amendment Search and Seizure The act of drawing someone's blood to test for substances constitutes a search under the Fourth Amendment. How a Certificate of Rehabilitation Can Benefit You – Discussed by a San Diego Criminal Defense Attorney.

When dealing with the legal system there are sometimes many different options when it comes to how you are charged, the punishment you receive and how you can better your quality of life after the fact. 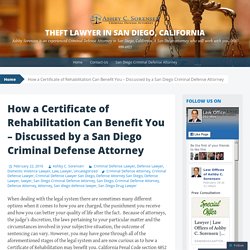 Because of attorneys, the judge’s discretion, the laws pertaining to your particular matter and the circumstances involved in your subjective situation, the outcome of sentencing can vary. However, you may have gone through all of the aforementioned stages of the legal system and are now curious as to how a Certificate of Rehabilitation may benefit you. California Penal Code section 4852 states that the court can issue an order declaring that a person convicted of a felony or certain misdemeanor sex offenses is now rehabilitated. 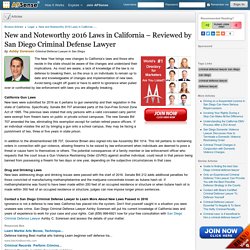 As most are aware, a lack of knowledge of the law is no defense to breaking them, so the onus is on individuals to remain up to date and knowledgeable of changes and implementation of new laws. Avoid being caught off guard or have to admit to ignorance when pulled over or confronted by law enforcement with laws you are allegedly breaking. California Gun Laws New laws were submitted for 2016 as it pertains to gun ownership and their regulation in the state of California.

In addition to the aforementioned SB 707, Governor Brown also signed into law Assembly Bill 1014. Drug and Drinking Laws New laws addressing drugs and drinking issues were passed with the start of 2016. About Ashby Sorensen Criminal Defense Lawyer in San Diego 1 connections, 0 recommendations, 14 honor points. Best Criminal defense lawyer in san diego ~ Ashby C. Sorensen - Criminal Defense Lawyer. DUI Defense Lawyer - diegoattorney. Those who have been convicted of driving while under the influence in California understand the level of freedom they may be forced to surrender. 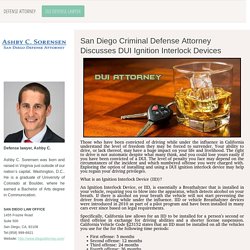 Your ability to drive, or lack thereof, may have a huge impact on your life and livelihood. The right to drive is not automatic despite what many think, and you could lose yours easily if you have been convicted of a DUI. The level of penalty you face may depend on the circumstances of the incident and which numbered offense you were charged with. Exploring the option of installing and using a DUI ignition interlock device may help you regain your driving privileges.