GlobeSimulator. Create and Convert Images to RGB Globe Format and 3D Preview To create and to convert images into our special data format we wrote a small java program called GlobeSimulator. 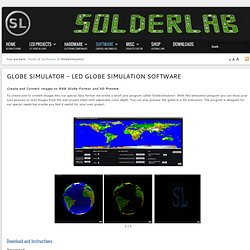 With this simulation program you can draw your own pictures or load images from file and convert them with adjustable color depth. You can also preview the globe in a 3D animation. The program is designed for our special needs but maybe you find it useful for your own project. Download Latest version: GlobeSimuator 0.5 Instructions Download the latest version of GlobeSimulator and extract the content. To start the simulation run the GlobeSimulator.jar file (java -Djava.library.path=. Update (July 2012): Unfortunately it seems that I cannot run the program (the 3D part) under Windows (Win7 32bit) with the description given above.

If you have further problems running the program or suggestions don't hesitate to contact us or leave a comment below! DIY 3D LED Globe! A DIY 3D LED globe was spotted at Maker Faire this year, it was probably one of the best. 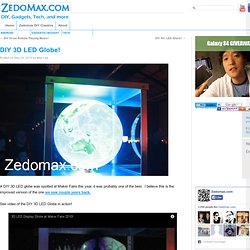 I believe this is the improved version of the one we saw couple years back. See video of the DIY 3D LED Globe in action! P.S. You can also learn to build something similar by looking at this DIY LED spinning globe. RGB Globe. A Globe is technically much more difficult than a matrix. 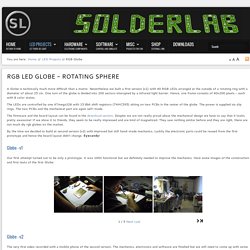 Nevertheless we built a first version (v1) with 40 RGB LEDs arranged at the outside of a rotating ring with a diameter of about 25 cm. One turn of the globe is divided into 200 sectors interupted by a infrared light barrier. Hence, one frame consists of 40x200 pixels - each with 8 color states. The LEDs are controlled by one ATmega328 with 15 8bit shift registors (74HC595) sitting on two PCBs in the center of the globe.

The power is supplied via slip rings. The firmware and the board layout can be found in the download section. By the time we decided to build at second version (v2) with improved but still hand-made mechanics. Globe - v1 Our first attempt turned out to be only a prototype. Globe - v2 The very first video recorded with a mobile phone of the second version. Final Video and Making-of We finally managed to make a final video of our RGB-LED-GLOBE! Source Code and Layout Wiring Power Supply. DIY LED Spinning Globe! We’ve seen many of these cool DIY LED spinning globes in the past but here’s another one that comes with free code so you can refer to it while building your own. 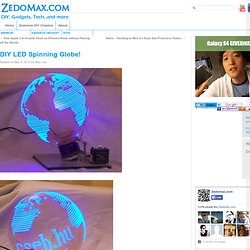 Our friend Csaba Bleuer sent in this crazy project he completed. It is a Rotating LED Globe which is being driven by a ATMega Microcontroller. The globe image was created using a program called BmpToAscii, with this program an image can be converted into Ascii. In this case the Ascii is used to display the globe! Via hackedgadgets, source. James N. Sears. For the past few months, and really accelerating in the last couple of weeks, Dad and I have been working on a new piece, set to debut at the Coachella Valley Music and Arts Festival April 25-27. 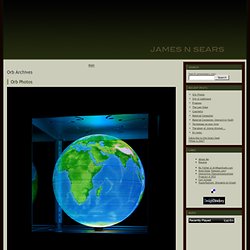 At its core will be a much improved spherical display with high-res surface complemented by volumetric accents, all in 24-bit color. On-board will be on the order of 10GB of removable flash memory, combining the increased resolution and color depth with a much greater potential show length as well as much easier program changes.

All of this will lend itself toward a renewed focus on content, which is a very exciting thing for me as a big step toward the high-definition three-dimensional canvas which I originally envisioned with the ORB. To make this a reality, I've finally crossed the void into the world of FPGA, and I'm loving it. The ability to quickly create massively parallel hardware in a few lines of code is really powerful. In the meantime, it's back to work. RGB LED POV Globe – Research. I have decided to create a 64x RGB LED POV Globe for Maker faire and Buring man this year. 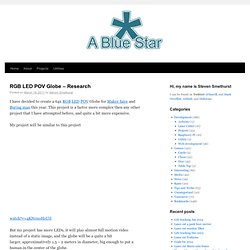 This project is a factor more complex then any other project that I have attempted before, and quite a bit more expensive. My project will be similar to this projectwatch? V=4KN0xoHsUiI But my project has more LEDs, it will play almost full motion video instead of a static image, and the globe will be a quite a bit larger, approximatively 1.5 – 2 meters in diameter, big enough to put a human in the center of the globe. Each of the 64x RGB LED will require 3x PWM pins for a total of 192 PWM pins. The speed at which I an do a a full refresh was going to be a problem as I needed to update 64x RGB LEDs (192 pins) using 12 BITs PWM 120 times a revolution, 192*12*120 = ~276480 bits per revolution.

I found a few boards that used shift registers to expand the IO such as the MondoMatrix LEDMatrix board. After researching several other boards, I decided to make my own specifically designed for this project .