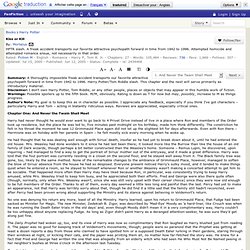 Harry Potter/Tom Riddle slash. This chapter and the next will serve primarily as introductory material.Disclaimer: I don't own Harry Potter, Tom Riddle, or any other people, places or objects that may appear in this humble work of fiction.Warnings: Possible spoilers up to the fifth book. M/M, obviously. Rating is down as T for now but may, possibly, increase to M as things progress.Author's Note: My goal is to keep this as in character as possible.

I appreciate any feedback, especially if you think I've got characters – particularly Harry and Tom – acting in blatantly ridiculous ways. Chapter One: And Never the Twain Shall Meet He had thought that he was dealing well enough with Sirius' death, insofar as he had yet to break down about it, until he had entered the old house. No one was denying his return any more, least of all the Ministry. Mr. Salir Chapter 1: Prologue, a harry potter fanfic. Title: SalirAuthor: BatsutousaiBeta Magickmaker17Pairings: Harry/Tom(Voldemort)Warnings: This will have slash(Guys on guys, ppl.). 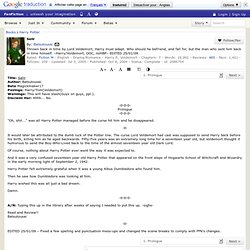 Disclaim Her: Ahhh... No. -0-0-0-Prologue-0-0-0- "Oh, shit... " was all Harry Potter managed before the curse hit him and he disappeared. It would later be attributed to the dumb luck of the Potter line. Of course, nothing about Harry Potter ever went the way it was expected to. And it was a very confused seventeen year old Harry Potter that appeared on the front steps of Hogwarts School of Witchcraft and Wizardry in the early morning light of September 2, 1942.

Snake Boy Chapter 1: Abandoned, a harry potter fanfic. Snake Boy This is for Aenigma's "The Child of Serpent" challenge listed on TheSilverSnitch which goes a little somethin' like this: SUMMARY: Harry was abandoned by the Dursleys at the tender age of four, and a magical serpent took him in and brought him up. 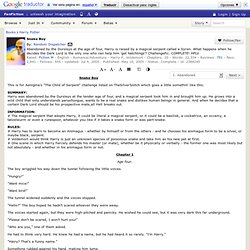 He grows into a wild child that only understands parseltongue, wants to be a real snake and dislikes human beings in general. And when he decides that a certain Dark Lord should be his prospective mate,all Hell breaks out. Restless Mornings, a harry potter fanfic. Title: Restless Mornings Author: Darkmoon666 Pairing: Fenrir Greyback/Harry Potter Summary: It's the following morning to a full moon, and Harry won't go to sleep. 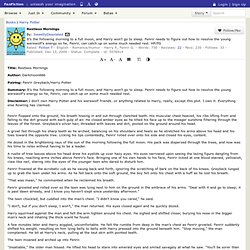 Fenrir needs to figure out how to resolve the young werewolf's energy so he, Fenrir, can catch up on some much needed rest. Disclaimer: I don't own Harry Potter and his werewolf friends…or anything related to Harry, really, except this plot. Fenrir flopped onto the ground, his breath hissing in and out through clenched teeth. Poison Chocolate, a harry potter fanfic. Author's note: Heyy, this is an idea I got from RandomReader90's In The Past To Change The Future: Reading Book 5. 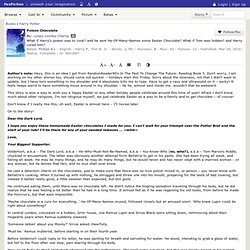 Don't worry, I am working on my other stories too, should come out quicker – holidays start this Friday. Sorry about the slowness, not that I didn't want to update, but I have torn something in my shoulder and it absolutely kills me to type. Have to get x-rays and ultrasound on it – sucky! It feels heaps weird to have something move around in my shoulder – he he, almost said inside me…wouldn't that be awkward.

This story is also a way to wish you a happy Easter or any other holiday people celebrate around this time of year! Don't know if I really like this, oh well, Easter is almost here – I'll revise later. On to the story! Dear the Dark Lord, When Tom Met Harry, a harry potter fanfic. When Tom Met Harry Thomas 'Tom' Marvolo Riddle was what many would consider a recluse. 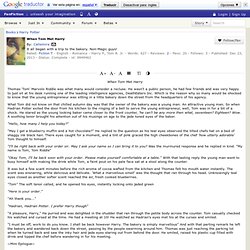 He wasn't a public person, he had few friends and was very happy to just sit at his desk running one of the leading intelligence agencies, DeathEaters Inc. Which is the reason why so many would be shocked to know that the young entrepreneur was sitting in a little bakery down the street from the headquarters of his agency. What Tom did not know on that chilled autumn day was that the owner of the bakery was a young man. An attractive young man. Together We'll Work It Through, a harry potter fanfic. Prompt: "Harry always gets himself dirty and messy, and OCD! 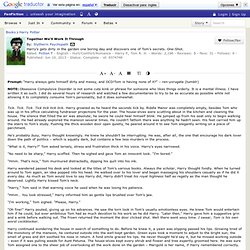 Tom is having none of it? " – ren-yorugata (tumblr) NOTE: Obsessive Compulsive Disorder is not some cute kink or phrase for someone who likes things orderly. It is a mental illness. I have written it as such. Tick. Burning Lies Chapter One: The Beginning, a harry potter fanfic. Disclaimer: I do not own Harry Potter, any of its plots or characters. 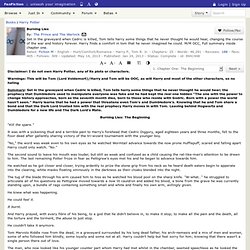 Warnings: This will be Tom (Lord Voldemort)/Harry and Tom will be OOC, as will Harry and most of the other characters, so no hating Summary: Set in the graveyard when Cedric is killed, Tom tells harry some things that he never thought he would hear; the prophecy that Dumbledore used to manipulate everyone was fake and he had kept the real one hidden "The one with the power to change history approaches, born as the seventh month dies, born to those who reside with Godric.

Made The Right Choice, a harry potter fanfic. After so many years you'd think the hurt would have just faded away. 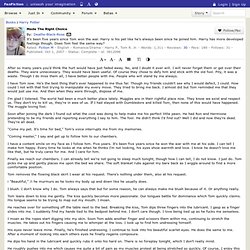 No, and I doubt it ever will. I will never forget them or get over their deaths. They were unnecessary. They would have been useful. Of course they chose to defy him and stick with the old fool. I have Tom now. I'm glad I listened. Soon after joining the dark I found out what the coot was doing to help make me his perfect little pawn. "Come my pet. "Coming master," I say and get up to follow him to our chambers. Made The Right Choice, a harry potter fanfic. Dom is for Domesticity, a harry potter fanfic. TITLE: Dom is for Domesticity AUTHOR: Slytherin Psychopath SUMMARY: The Order finds out Tom has Harry and try to save him. 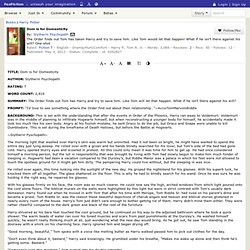 Harry hoped the rest of the ceiling came down on his head. He slowly made his way toward the front of the Chamber. He sat down Indian style on the floor next to her, making sure to avoid the large puddles of water. You forgot my birthday!, a harry potter fanfic. It was the morning of December thirty-first and Tom was sleeping contentedly in his bed. Just then the alarm went on to wake Tom up, but instead of directly opening his eyes he just searched the other side of the bed to feel the warmth of his soul-mate, Harry. But Harry's side of the bed was cold. Tom immediately opened his eyes only to find that Harry wasn't in bed. He glanced at the clock and frowned, it was just five-thirty in the morning.

Harry doesn't usually get up that early, that is Tom's habit. But then Tom remembered that it was his birthday today. With these thoughts in his mind, Tom got out of bed, dressed up and went downstairs. He paused for a few minutes to check the owl-post but there wasn't a single letter, let alone the presents that Tom had been expecting. He went angrily into the kitchen expecting to find Harry, but instead found a load of house-elves working tirelessly and making so many different varieties of dishes, that it left Tom staring with his mouth wide-open. Of a Diary, a harry potter fanfic. Disclaimer: I don't own Harry Potter. All I own is the plot, which is essentially a rehashed version of a stereotypical CoS TR/HP scene in the 2nd book. Of a Diary Tom looked up from his relaxed position on the floor, as a flair of light caught his eye.

His domed ceiling was glowing with a golden light, which seemed to emanate from the black letters that where quickly being scrawled. Automatically, Tom's gaze went to the ink well on his desk. Tom contemplated not writing to the girl, who was no doubt writing a tearful, teen-angst filled tirade about how no one liked her or some other such drivel, when two glowing words caught his attention. Compulsion Chapter 1, a harry potter fanfic. Summary: During the last task after Voldemort is resurrected, Harry is kidnapped and taken to Riddle Manor unconscious. When he wakes he beings to watch and talk to Voldemort since he has no where else to go.

Ancient leather-bound volumes lined the shelves, and stacks of yellowed parchment covered the large wooden desk. Harry looked curiously at one of the top ones; it appeared to be a recipe for something called Baked Alaska, with alchemical notations in the margin. How absurd that the room was still here, unchanged, when Dumbledore himself was gone!

How could the fragile paper on his desk outlast a human being? Harry looked around the room, bewildered.