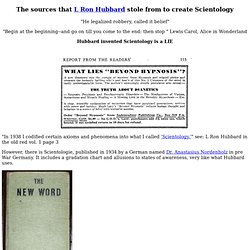 Anastasius Nordenholz in pre War Germany. It includes a gradation chart and allusions to states of awareness, very like what Hubbard uses. IN 1908 a book called "The Word" was published containing 3 references to Scientology, it meant pseudo-science! Volney Matheson, the inventor of the E-meter, in fact, was far far more than just an electronics tinker..read chapter 6 of Creative Image Therapy by Volney Matheson,a black electrician, and the inventor of the E-meter. from JerryF on ESMB board: One of the big lies spread by Hubbard and David Miscavige was that LRH was the sole source of dianetics and scientology.

We have an abundance of documentation and testimony on LRH's plagiarism from sources inside and outside of Dn and Scn. The Materials of Dianetics and Scientology By L. Ron Hubbard. Voltaire Quotes. Voltaire Quotes. - We have 1 book review related to Voltaire. ...the safest course is to do nothing against one's conscience. 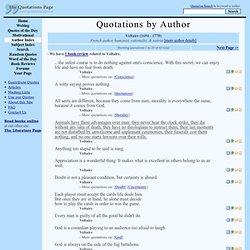 With this secret, we can enjoy life and have no fear from death. Voltaire A witty saying proves nothing. All sects are different, because they come from men; morality is everywhere the same, because it comes from God. Animals have these advantages over man: they never hear the clock strike, they die without any idea of death, they have no theologians to instruct them, their last moments are not disturbed by unwelcome and unpleasant ceremonies, their funerals cost them nothing, and no one starts lawsuits over their wills.

Anything too stupid to be said is sung. Appreciation is a wonderful thing: It makes what is excellent in others belong to us as well. Doubt is not a pleasant condition, but certainty is absurd. Each player must accept the cards life deals him. Every man is guilty of all the good he didn't do. God is a comedian playing to an audience too afraid to laugh. SPIRITUAL FREEDOM ZONE. I see this question being raised on different forums by disappointed scientologists or skeptical observers and would like to provide some answers from my personal experience. 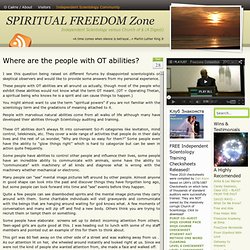 These people with OT abilities are all around us actually, though most of the people who exhibit these abilities would not know what the term OT meant. (OT = Operating Thetan, a spiritual being who knows he is a spirit and can cause things to happen.) You might almost want to use the term “spiritual powers” if you are not familiar with the scientology term and the gradations of meaning attached to it. People with marvelous natural abilities come from all walks of life although many have developed their abilities through Scientology auditing and training. These OT abilities don’t always fit into convenient Sci-Fi categories like levitation, mind control, telekinesis, etc.

Questions About Scientology. INTRODUCTION to INDEPENDENT SCIENTOLOGY - Independent Scientology Community. For several years, in two periods between 1963 and 1978, Kenneth Urquhart had the privilege of being close to LRH. 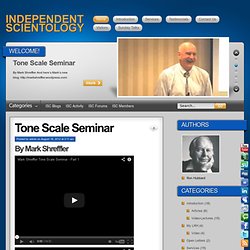 At Saint Hill Manor, he was LRH’s Household Officer; as such he was with LRH privately every day that LRH was at SH, and the two became good friends. LRH later made him an exec at the SH Org, and in 1968 called him to the ship. He then created the post of LRH Personal Communicator for Ken, who held it until 1978. Although the duties of the post were mainly executive and administrative, LRH used Ken in technical projects and in doing so gave Ken extensive and intensive though informal technical training.

In 1980, Ken became an Advanced Courses Specialist in the Flag NOTs HGC (later designated Class IX) and he became the highest-producing auditor in that HGC for 1982. This interview with Ken Urquhart was taken after the 9th annual FreeZone Convention in September 2010, at the Deer Lake Resort, WA by Tatiana Baklanova. iScientology Blog. Moving On Up a Little Higher. Excalibur Revisited: The Akashic Book of Truth - Part 4b. The Upper Dynamics The dynamics are set up in concentric circles, so that it is logical that senior dynamics rule junior dynamics.

Bearing this in mind, it is workable in living to not consider any one dynamic as more important than another. Dynamics exist in different universes. You have a set of dynamics. Other people have dynamics. (These were copyrighted by L. It should be obvious that the senior dynamics rule and produce the junior dynamics.

You may include these in grade processes as necessary and appropriate. The Akashic Record The Akashic Record is a recording that supposedly exists out in another space which contains every event that has happened to every individual past, present, and future. By making adjustments in the Akashic Record a person can change other people. If you have attained this level of spiritual evolvement, you will have no problem in auditing people, because you can look up anything that is troubling them or you, on the subject of their case.