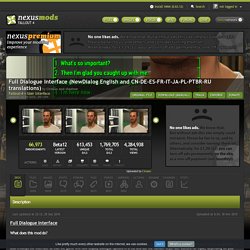 The Full Dialogue Interface mod makes the game display the full lines of what your character is going to say in conversation, instead of just a paraphrase. It also revamps the interface so that the game will now display dialogue options in a list and use the number keys/face buttons for input, depending on your control scheme. The mod supports both keyboard and gamepad. Many different interface layouts are available, so check the screenshot section for examples of what the mod looks like in action. This is a translation of shadwar's work and should not be used at the same time as the NewDialog mod. News Support for the new Nuka World DLC has been added. Full Dialogue Interface is also available for Xbox One and Playstation 4. Settlement Supplies Expanded 2.5 - Safe SSEx at Fallout 4 Nexus. **SKE version available. 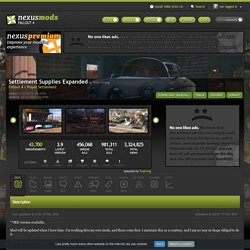 Mod will be updated when I have time. I'm working thru my own mods, and those come first. I maintain this as a courtesy, and I am no way or shape obliged to do it. Posts about how this breaks WW or similar nonsense will be deleted. Actual bug reports are fine, and I will do my best to help. This mod adds:Usable furniture items (beds/chair/benches)Snappable doorsSnappable chainlink fence setSnappable covenant fence setMiscellaneous interactive objects (barber/surgery chair, etc.)Static decorative objects (cars/trees/rocks, etc.)Alternate power armor racketc etc. InstallingUse NMM or do it manually. Updating If you're pre 3.0, uninstall SSEX, make new save, install SSEX 3.6 and play. Improved Map with Visible Roads at Fallout 4 Nexus. Vivid Fallout - Landscapes - Textures in HD - ORIGINAL SIZE - LOWER RESOLUTION at Fallout 4 Nexus. 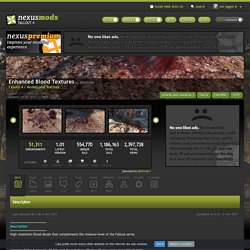 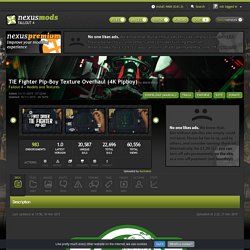 This time, in 4K! Just in case you're not familiar with the TIE Fighters of the Star Wars Universe, please see the animation below. If you are, see the animation anyway, its badass as fuck. This retexture has been hand crafted by yours truly with the only copy pasting being the logos of the Galactic Empire and the First Order. The theme closely resembles the color scheme of the new TIE Fighters from Star Wars Episode VII. NEXUS EXCLUSIVE PLEASE DON'T UPLOAD ANYWHERE ELSEWhen in doubt, please ask. Please watch video in 720p, screenshots don't the texture justice.. actually the video doesn't either. INSTALLATIONYou can install this manually or through NMM. Credit/Permissions: I do have any affiliation with nor am I profitting in any way from the use any depictions of the brands or images used in the creation of this texture.

Logo likeness/insp from Shadman's Vault Girl and bigCman123's interpretation. Craftable Ammo at Fallout 4 Nexus. , on 1 January 1970 1:00:00, said: hiphophippo87 wrote: can anyone help me? 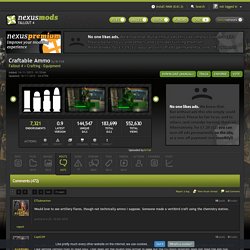 Ive been using this great mod for a while without issue, I installed with NMM and I enabled modding in the ini. suddenly when I came to play tonight, I loaded in and tried to craft some ammo but all the recipes are missing. I'm not using the beta update of the game on steam and I have only a few mods, none of which I imagine could cause a problem with this mod. i checked my NMM and it says that all my plugins (beside fallout4.esm, of course) are unticked, although all the other mods are still functioning, I re-checked the boxes and it didn't help. I also checked the inis to see if they'd been reset or something, but they were the same way I left them. has anyone had the same problem or know a solution? Darophi wrote: You are not the only one. LittleAldy wrote: All my recipes went away too.

RunaManda wrote: I think it may be an issue with the new 1.2 patch which Steam has automatically applied. Crafting Workbenches - Craftable Weapons Armor Clothing Ammo Junk at Fallout 4 Nexus. Are you disappointed that Bethesda left out weapons, armor and item crafting from Fallout 4 when they've had it in previous games? 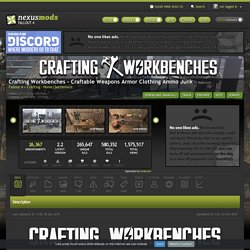