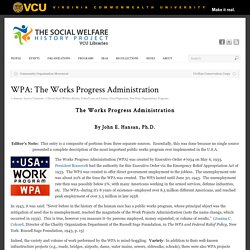 Hansan, Ph.D. Editor’s Note: This entry is a composite of portions from three separate sources. Essentially, this was done because no single source presented a complete description of the most important public works program ever implemented in the U.S.A. The Works Progress Administration (WPA) was created by Executive Order #7034 on May 6, 1935. In 1943, it was said: “Never before in the history of the human race has a public works program, whose principal object was the mitigation of need due to unemployment, reached the magnitude of the Work Projects Administration (note the name change, which occurred in 1939).

Indeed, the variety and volume of work performed by the WPA is mind-boggling. . *1.2 billion school lunches served *650,000 miles of new or improved roads (enough roadwork to go around the Earth 26 times) *124,000 new or improved bridges *1.1 million new or improved culverts. Legacies of the New Deal in Virginia. Do you use cemetery records to trace your family tree? 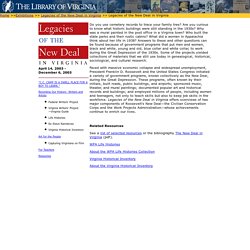 Are you curious to know what historic buildings were still standing in the 1930s? Why was a mural painted in the post office in a Virginia town? Who built the state parks and their rustic cabins? What did a woman in Appalachia think about her life in 1938? Answers to these and other questions can be found because of government programs that put men and women, black and white, young and old, blue collar and white collar, to work during the Great Depression of the 1930s. Faced with massive economic collapse and widespread unemployment, President Franklin D. Related Resources. WPA: The Works Progress Administration - Social Welfare History Project. New Deal Landmarks reshaped Hampton Roads.

Seventy-five years after the New Deal began to wind down, many of the public works projects the Franklin D. 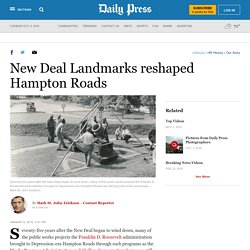 Roosevelt administration brought to Depression-era Hampton Roads through such programs as the Works Progress Administration and Civilian Conservation Corps are still big parts of the Hampton Roads landscape. Here’s a checklist exploring that legacy: Colonial Parkway, Colonial National Historical Park and Yorktown National Battlefield, Yorktown. CCC workers based at what was then Colonial National Monument in 1933 transformed the west bank of the York River between Yorktown and Williamsburg, reshaping the landscape, clearing a path for the road and planting thousands of trees to form a “natural canopy” for the parkway. 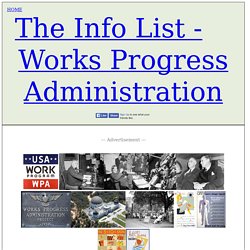 In a much smaller but more famous project, Federal Project Number One Federal Project Number One , the WPA employed musicians, artists, writers, actors and directors in large arts, drama, media, and literacy projects. Almost every community in the United States had a new park, bridge or school constructed by the agency. The WPA's initial appropriation in 1935 was for $4.9 billion (about 6.7 percent of the 1935 GDP). Headed by Harry Hopkins. Jstor.

New Deal in Virginia. Virginia availed itself of these programs in spite of opposition from its political leaders. 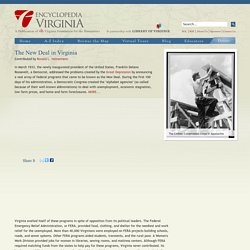 The Federal Emergency Relief Administration, or FERA, provided food, clothing, and shelter for the neediest and work relief for the unemployed. More than 40,000 Virginians were employed on FERA projects building schools, roads, and sewer systems. Other FERA programs aided students, transients, and the rural poor. A Women's Work Division provided jobs for women in libraries, sewing rooms, and mattress centers. 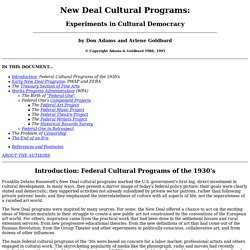 In many ways, they present a mirror image of today's federal policy picture: their goals were clearly stated and democratic; they supported activities not already subsidized by private sector patrons, rather than following private patrons' leads; and they emphasized the interrelatedness of culture with all aspects of life, not the separateness of a rarefied art world. The New Deal programs were inspired by many sources. The main federal cultural programs of the '30s were based on concern for a labor market: professional artists and others engaged in cultural work. Foundations of the Past: The WPA Historical Inventory Project in Virginia.

Foundations of the Past The WPA Historical Inventory Project in Virginia by Edward D. 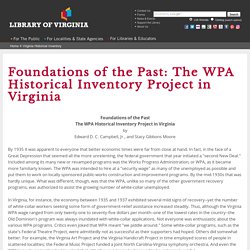 C. Campbell, Jr., and Stacy Gibbons Moore By 1935 it was apparent to everyone that better economic times were far from close at hand.