Fake News and the Aesthetic of Objectivity - Cyborgology. FAKE NEWS. 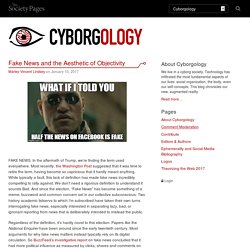 In the aftermath of Trump, we’re finding the term used everywhere. Most recently, the Washington Post suggested that it was time to retire the term, having become so capricious that it hardly meant anything. While typically a fault, this lack of definition has made fake news incredibly compelling to rally against. We don’t need a rigorous definition to understand it sounds Bad. Here Are Some Of Those Fake News Stories That Mark Zuckerberg Isn't Worried About. Young Canadians in a Wired World, Phase III: Experts or Amateurs? Gauging Young Canadians’ Digital Literacy Skills. This report is drawn from a national survey of Canadian youth conducted by MediaSmarts in 2013. 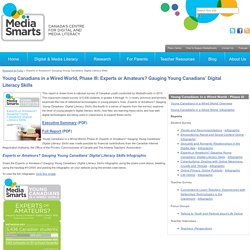 The classroom-based survey of 5,436 students in grades 4 through 11, in every province and territory, examined the role of networked technologies in young people’s lives. Experts or Amateurs? Gauging Young Canadians’ Digital Literacy Skills (the fourth in a series of reports from the survey) explores the level of young people’s digital literacy skills, how they are learning these skills and how well digital technologies are being used in classrooms to support these skills. Executive Summary (PDF) Full Report (PDF) Balanced news, issues and opinions, media bias ratings, political news. Five Key Questions Form Foundation for Media Inquiry. Bias in News Sources. Media Literacy 101. Five Key Questions Form Foundation for Media Inquiry. News & Media Literacy: 9–12.