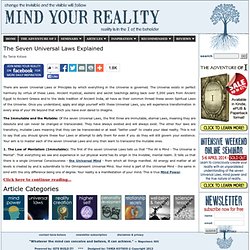 The Universe exists in perfect harmony by virtue of these Laws. Ancient mystical, esoteric and secret teachings dating back over 5,000 years from Ancient Egypt to Ancient Greece and to the Vedic tradition of Ancient India, all have as their common thread these seven Spiritual Laws of the Universe. Once you understand, apply and align yourself with these Universal Laws, you will experience transformation in every area of your life beyond that which you have ever dared to imagine.

The Seven Shamanic Levels of Consciousness. Preface Although formerly only known by shamans, I present this knowledge now to spiritual seekers and for the benefit of mankind.In 1989 I met a Hungarian Shaman, Joska Soos, in Antwerp, Belgium, who helped people with his private "shamanizations" and classes. Over the years I learned a lot, with new information about shamanism I had never read about in any literature. Among it was the system of seven levels of consciousness. Although he did not talk that much about it, it seemed such a useful system to me that I went further into it myself. I began to understand that some of my spiritual experiences in my past corresponded with those levels of consciousness. Table of Contents Introduction 1. 2. 3. 4. 5. 6. 7. Earth's Grid System, Becker-Hagens, Ley Lines, Hartmann Net, Curry Lines - Science and Pseudoscience.

Earth's Grid Systems Science and Pseudoscience Topography, is the study of Earth's surface shape and features or those of planets, moons, and asteroids. 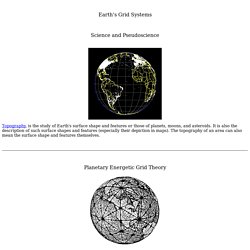 It is also the description of such surface shapes and features (especially their depiction in maps). The topography of an area can also mean the surface shape and features themselves. Planetary Energetic Grid Theory Planetary Energetic Grid Theory falls under the heading of pseudoscience. Plato recognized grids and their patterns, devising a theory that the Earth's basic structure evolved from a simple geometric shapes to more complex ones. Becker-Hagens Grid. Robert Zucker. Qabalah: Robert Zucker By Robert Zucker My interest in the occult began while in high school. 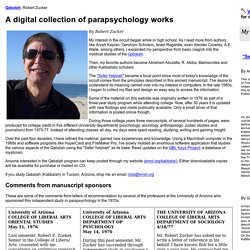 As I read more from authors like Aryeh Kaplan, Gershom Scholem, Israel Regardie, even Aleister Crowley, A.E. Waite, among others, I expanded my perspective from basic magick into the mystical studies of the Qabalah. Then, my favorite authors became Abraham Abulafia, R. The "Sefer Yetzirah" became a focal point since most of today's knowledge of the occult comes from the principles described in this ancient manuscript. Some of the material on this website was originally written in 1976 as part of a three-year study program while attending college. During those college years three manuscripts, of several hundreds of pages, were produced for college credit in five different University departments (psychology, sociology, anthropology, Judaic studies and journalism) from 1975-77.

Over the past four decades, I have refined the material, gained new experiences and knowledge.

Angels. Aryeh Kaplan. MeruIntroPacket.2013. Dig (TV Mini-Series 2015) The Kabbalah Centre. The ancient Kabbalist Rav Shimon bar Yochai wrote in the Zohar that it was Moses, not God, who parted the Red Sea, allowing the Israelites to narrowly escape Pharaoh and the Egyptian army. In order to accomplish this miracle, Moses combined the power of certainty with a very powerful spiritual technology. He had possession of a formula that literally gave him access to the subatomic realm of nature. The formula Moses used to overcome the laws of nature has been hidden in the Zohar for 2000 years. This formula is called the 72 Names of God. Religion, World Religions, Comparative Religion - Just the facts on the world's religions. Scripture and Prophecy. 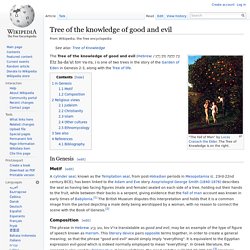 The traditional translation is "good and evil", but tov wa-ra is a fixed expression denoting "everything". To Harry Orlinsky, this phrase does not necessarily denote a moral concept.[4] However, Robert Alter believes that there could be a moral connotation after all: When God forbids the man to eat from the tree of knowledge, He says that if he does so, he is "doomed to die". Religious views[edit] Judaism[edit]