How to use ReWire to Connect Notion to Studio One. September 30,2014 Did you know? 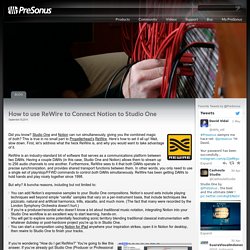 Studio One and Notion can run simultaneously, giving you the combined magic of both? How to Set Up ReWire in PreSonus Studio One. You may be using other audio applications such as Live or Reason. 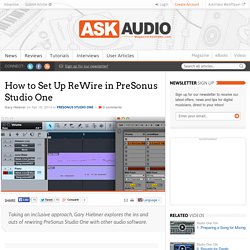 But what if you want to somehow integrate or sync your other audio software with Studio One. This can be done via ReWire. ReWire is a protocol that was developed by Propellerhead to allow you to integrate Reason with your other DAW applications, but the protocol has become such a standard household name that it has been taken up by many other software audio developers so that you can sync more than one audio application to the other. In this article, let’s take a look at how to ReWire Studio One to other audio applications. Tablature. Example of numeric vihuela tablature from the book "Orphenica Lyra" by Miguel de Fuenllana (1554). 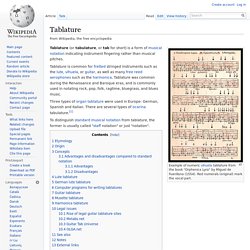 Red numerals (original) mark the vocal part. How To Read Guitar Tablature. Guitar tablature only works if the player already knows the solo or the chords sound like, since TAB usually doesn't allow you to count beats like standard notion. 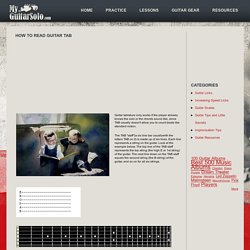 The TAB "staff"(a six line bar usuallywith the letters TAB on it) is made up of six lines. Each line represents a string on the guitar. Look at the example below. The top line of the TAB staff represents the top string (the high E or 1st string) of the guitar. Learning Guitar: How to Read Guitar Tablature. Glossary of musical terminology. This is a list of musical terms that are likely to be encountered in printed scores, music reviews, and program notes. 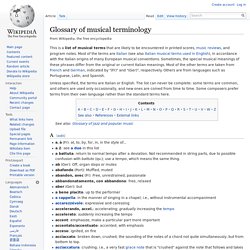 Most of the terms are Italian (see also Italian musical terms used in English), in accordance with the Italian origins of many European musical conventions. Sometimes, the special musical meanings of these phrases differ from the original or current Italian meanings. Most of the other terms are taken from French and German, indicated by "(Fr)" and "(Ger)", respectively. Others are from languages such as Portuguese, Latin, and Spanish.

Unless specified, the terms are Italian or English. Repetition (music) Memory affects the music-listening experience so profoundly that it would be not be hyperbole to say that without memory there would be no music. 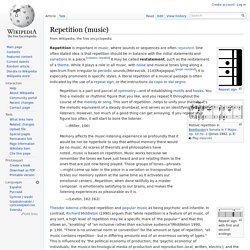 As scores of theorists and philosophers have noted...music is based on repetition. Music works because we remember the tones we have just heard and are relating them to the ones that are just now being played. Those groups of tones—phrases—might come up later in the piece in a variation or transposition that tickles our memory system at the same time as it activates our emotional centers...Repetition, when done skillfully by a master composer, is emotionally satisfying to our brains, and makes the listening experiences as pleasurable as it is.

—(Levitin, 162-163) Repeat sign with first and second endings During the Classical era, musical concerts were highly expected events, and because someone who liked a piece of music could not listen to it again, musicians had to think of a way to make the music sink in. Benward & Saker (2003). Percussion notation. Percussion instruments are generally grouped into two categories: pitched and non-pitched. 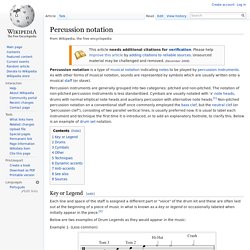 It is usual to label each instrument and technique the first time it is introduced, or to add an explanatory footnote, to clarify this. Glossary of musical terminology. Repetition (music) Percussion notation. List of musical symbols. Lines[edit] Clefs[edit] Clefs define the pitch range, or tessitura, of the staff on which it is placed. 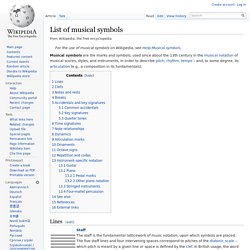 A clef is usually the leftmost symbol on a staff. Additional clefs may appear in the middle of a staff to indicate a change in register for instruments with a wide range. In early music, clefs could be placed on any of several lines on a staff. Notes and rests[edit] Durations shorter than the 64th are rare but not unknown. 128th notes are used by many composers, including Mozart and Beethoven; 256th notes occur in works by Vivaldi, Mozart and Beethoven. 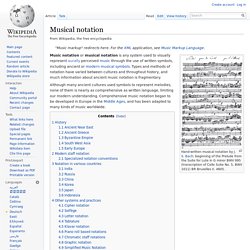 S. Bach: beginning of the Prelude from the Suite for Lute in G minor BWV 995 (transcription of Cello Suite No. 5, BWV 1011) BR Bruxelles II. 4805. Music notation or musical notation is any system used to visually represent aurally perceived music through the use of written symbols, including ancient or modern musical symbols. Types and methods of notation have varied between cultures and throughout history, and much information about ancient music notation is fragmentary. Although many ancient cultures used symbols to represent melodies, none of them is nearly as comprehensive as written language, limiting our modern understanding.

History[edit] Ancient Near East[edit] The earliest form of musical notation can be found in a cuneiform tablet that was created at Nippur, in Sumer (today's Iraq), in about 2000 BC. Ancient Greece[edit] Ornament (music) In the baroque period, it was common for performers to improvise ornamentation on a given melodic line. 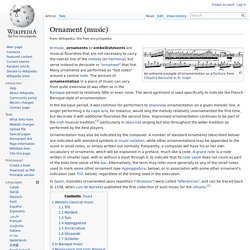 A singer performing a da capo aria, for instance, would sing the melody relatively unornamented the first time, but decorate it with additional flourishes the second time.