HOW THE WORD FOR GOD N-G-R BECAME NIGGER - History Forum ~ All Empires. Am new to this site i don't know anyone has posted about this, but if they have, oh well. 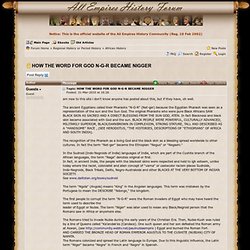 The ancient Egyptians called their Pharaohs "N-G-R" (Net-ger) because the Egyptian Pharaoh was seen as a representation of the sun and the Sun God. The original Pharaohs who were pure Black Africans SAW BLACK SKIN AS SACRED AND A DIRECT BLESSING FROM THE SUN GOD, ATEN. In fact Blackness and black skin became associated with God and the sun. BLACK PEOPLE WERE POWERFUL, CULTURALLY ADVANCED, MILITARILY SUPERIOR, BLACK/DARKBROWN IN COMPLEXION, STRONG STATURE, TALL AND DESCRIBED AS A "HANDSOME" RACE , (SEE HERODOTUS, "THE HISTORIES, DESCRIPTIONS OF "ETHIOPIANS" OF AFRICA AND SOUTH INDIA).

The recognition of the Pharaoh as a living God and the black skin as a blessing spread worldwide to other cultures. HOW THE WORD FOR GOD N-G-R BECAME NIGGER. The ancient Egyptians called their Pharaohs "N-G-R" (Net-ger) because the Egyptian Pharaoh was seen as a representation of the sun and the Sun God. 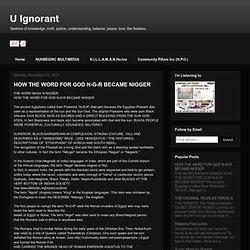 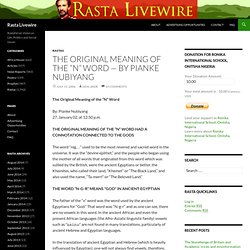 The word “nig…” used to be the most revered and sacred word in the universe. It was the “devine epithet,” and the people who began using the mother of all words that originated from this word which was sullied by the British, were the ancient Egyptians or better, the Khemites, who called their land, “Khemet” or “The Black Land,” and also used the name, “Ta-merri” or “The Beloved Land.” The father of the “n” word was the word used by the ancient Egyptians for “God.” That word was “N-g-r” and as one can see, there are no vowels in this word. HOW THE WORD FOR GOD N-G-R BECAME NIGGER - History Forum ~ All Empires. DEATH OF THE WILLIE LYNCH SPEECH. DEATH OF THE WILLIE LYNCH SPEECH (Part I) by Prof. 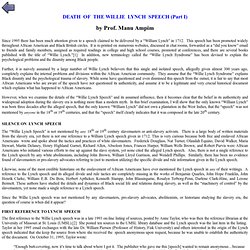 Manu Ampim Since 1995 there has been much attention given to a speech claimed to be delivered by a “William Lynch” in 1712. This speech has been promoted widely throughout African American and Black British circles. It is re-printed on numerous websites, discussed in chat rooms, forwarded as a “did you know” email to friends and family members, assigned as required readings in college and high school courses, promoted at conferences, and there are several books published with the title of “Willie Lynch.”[1] In addition, new terminology called the “Willie Lynch Syndrome” has been devised to explain the psychological problems and the disunity among Black people.

Melanin. Kingdoms of Africa Great Zimbabwe. West African Dogon Masks Documentary by BBC. Black Genesis: The Prehistoric Origins of Ancient Egypt. Living Black History: Boston's busing crisis. (NECN: Latoyia Edwards) - For as long as I've been alive, my mother Arnita has shared with me her experience of being forced to leave the comfort of her Dorchester community to ride the school bus to South Boston High as part of city-wide desegregation when she was 14 years old. 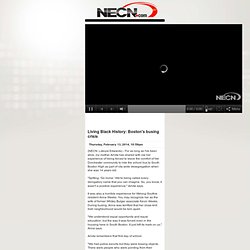 "Spitting. 'Go home.' We're being called every derogatory name that you can imagine. Birth of the Scratch. A conversation with Hip Hop's Pioneers. The Mother Of Hip-Hop Story (R.I.P.) Living Black History: Boston's busing crisis. Percy Julian Biography. African-American chemist Percy Julian was a pioneer in the chemical synthesis of medicinal drugs such as cortisone, steroids and birth control pills. 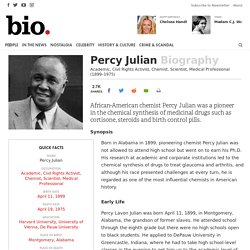 Synopsis Born in Alabama in 1899, pioneering chemist Percy Julian was not allowed to attend high school but went on to earn his Ph.D. His research at academic and corporate institutions led to the chemical synthesis of drugs to treat glaucoma and arthritis, and although his race presented challenges at every turn, he is regarded as one of the most influential chemists in American history. 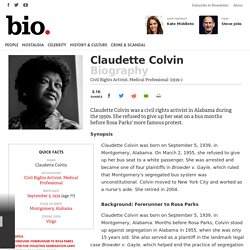 She refused to give up her seat on a bus months before Rosa Parks' more famous protest. Synopsis Claudette Colvin was born on September 5, 1939, in Montgomery, Alabama. Top 10 Things You Thought Were Black-Owned But Aren’t. From TheBVX.com: BET, George Foreman Grills and Dark & Lovely No Lye Relaxer have a commonality: They’re not as black as you think. 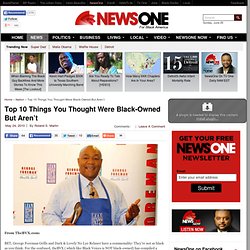 For the confused, theBVX ( which like Black Voices is NOT black-owned) has compiled a shocking list of 10 things you thought were black owned but actually aren’t. 10. 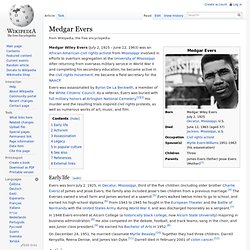 As a veteran, Evers was buried with full military honors at Arlington National Cemetery.[2][3] His murder and the resulting trials inspired civil rights protests, as well as numerous works of art, music, and film. Early life[edit] Evers was born July 2, 1925, in Decatur, Mississippi, third of the five children (including older brother Charlie Evers) of James and Jesse Evers; the family also included Jesse's two children from a previous marriage.[4] The Everses owned a small farm and James worked at a sawmill.[5] Evers walked twelve miles to go to school, and earned his high-school diploma.[6] From 1943 to 1945 he fought in the European Theater and the Battle of Normandy with the United States Army during World War II, and was discharged honorably as a sergeant.[7] 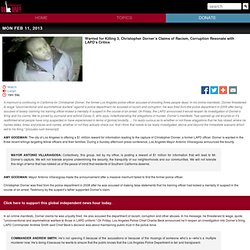 Dorner is wanted in the three recent killings targeting fellow officers and their families. During a Sunday afternoon press conference, Los Angeles Mayor Antonio Villaraigosa announced the bounty. MAYOR ANTONIO VILLARAIGOSA: Collectively, this group, led by my office, is posting a reward of $1 million for information that will lead to Mr. Dorner’s capture. Assata Shakur Speaks! Why I Am Opposed to the War in Vietnam - Full Speech.wmv. Rev. Martin Luther King, Jr. - April 4, 1967 - Beyond Vietnam: A Time To Break Silence [Full Speech]