What's a Shoulder Turn Part 3. Since I covered the shoulder turn on the backswing for the last two months, I need to finish this subject by detailing the shoulder movements on the downswing. 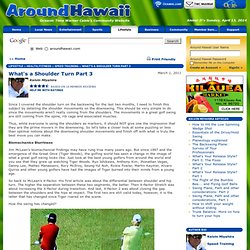 This should be very simple to do since the movements aren’t really coming from the shoulders. The movements in a great golf swing are still coming from the spine, rib cage and associated muscles. Thus, while everyone is using the shoulders as markers, it should NOT give one the impression that they are the prime movers in the downswing. So let’s take a closer look at some puzzling or less than optimal notions about the downswing shoulder movements and finish off with what is truly the best move you can make.

Biomechanics Blurriness Jim McLean’s biomechanical findings may have rung true many years ago. So back to McLean’s X-Factor. How the swing has changed? Here’s a top view of current world #1 LPGA golfer Yani Tseng vs. What's a Hip Turn? Part 1. If you pick up the latest Golf Magazine or Golf Digest and read the instructional material, what you find is that the names and faces change but the content is pretty much the same from 10 or 20 years ago. 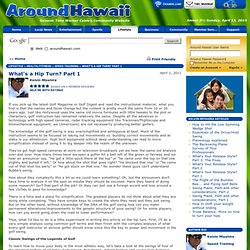 Just like Hollywood uses the same old movie formulas with little tweaks to the plot or characters, golf instruction has remained relatively the same. Despite all the advances in technology with high speed cameras, radar tracking equipment like Trackman/Flightscope and biomechanical equipment, we (Americans) are not necessarily producing better golfers. The knowledge of the golf swing is way oversimplified and ambiguous at best. Much of the instruction seems to be focused on taking out movements vs. building correct movements and at stake is our athleticism.

High tech equipment without deep understanding can lead to more simplification instead of using it to dig deeper into the realm of the unknown. How about they complexify this a bit so we could learn something? Sam Snead Ben Hogan. What's a Hip Turn? Part 2. (This article is Part Two of "What's a Hip Turn? 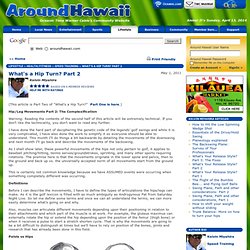 " Part One is here.) Hip/Leg Movements Part 2: The Complexification Warning: Reading the contents of the second half of this article will be extremely technical. If you don’t like the technicality, you don’t want to read any further. I have done the hard part of deciphering the genetic code of the legends’ golf swings and while it is very complicated, I have also done the work to simplify it so everyone should be able to understand. As I shall show later, these powerful movements of the hips not only pertain to golf, it applies to baseball pitching/hitting, tennis serves/groundstrokes, sprinting, and many other sports requiring rotations. This is certainly not common knowledge because we have ASSUMED events were occurring when something completely different was occurring.

Definitions. How To Turn Your Hips Part 3: The Backswing. Now that we know how the legends used their hips on the downswing, it should make it simpler to understand what to do on the backswing. 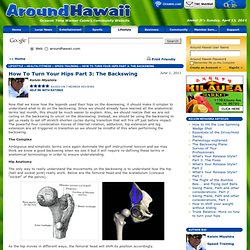 Since we should already have learned all the anatomical terms last month, this should be much easier to explain. Also, we should realize that we are not coiling on the backswing to uncoil on the downswing. Instead, we should be using the backswing to get us ready to set off stretch shorten cycles during transition that will fire off just before impact. The powerful four combination moves of internal rotation, adduction, hip extension and leg extension are all triggered in transition so we should be mindful of this when performing the backswing. The Complex Ambiguous and simplistic terms once again dominate the golf instructional lexicon and we may think we know a good backswing when we see it but it will require re-defining these terms in anatomical terminology in order to ensure understanding. Hip Anatomy Added Complexity Mirrored Movements. PGA Tour Grip Styles - Part 1. The most basic fundamental of all in golf is the grip. 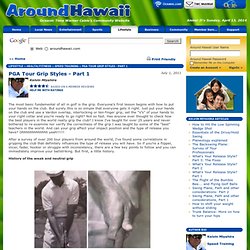 Everyone’s first lesson begins with how to put your hands on the club. But surely this is so simple that everyone gets it right. Just put your hands on the club and use a Vardon overlap, interlocking or ten-finger grip, set the “V’s” of your hands to your right collar and you’re ready to go right? Not so fast. Has anyone ever thought to check how the best players in the world really grip the club? After a survey of over 200 tour players from around the world, I’ve found some correlations in gripping the club that definitely influences the type of release you will have. History of the weak and neutral grip There was a young golfer who possessed all the power in world but fought a nasty hook. But his right hand was also in a “weak” position with his “V” pointing to his chin.

While this may have worked perfectly for Hogan, could this be the reason that many have tried and failed at copying Hogan? Spine Engine Swing: Lateral Bend. Correspondences with Dr. 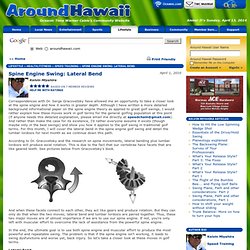 Serge Gracovetsky have allowed me an opportunity to take a closer look at the spine engine and how it works in greater depth. Although I have written a more detailed background informational paper on the spine engine theory as applied to great golf swings, I would rather explain how these moves work in golf terms for the general golfing population at this point (if anyone needs this detailed explanation, please email me directly at speedchain@gmail.com). And rather than make the case for its existence, I'd rather everyone assume it exists (though maybe only in the best swings) and show you how it applies to the golf swing in traditional golf terms. For this month, I will cover the lateral bend in the spine engine golf swing and detail the lumbar lordosis for next month as we continue down this path.

According to Dr. And when these facets connect to each other, they act like gears and produce rotation. Lateral Bend So when does lateral bending occur?