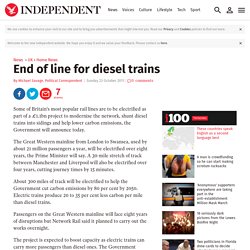 The Great Western mainline from London to Swansea, used by about 21 million passengers a year, will be electrified over eight years, the Prime Minister will say. A 30-mile stretch of track between Manchester and Liverpool will also be electrified over four years, cutting journey times by 15 minutes. About 300 miles of track will be electrified to help the Government cut carbon emissions by 80 per cent by 2050. Electric trains produce 20 to 35 per cent less carbon per mile than diesel trains.

Passengers on the Great Western mainline will face eight years of disruptions but Network Rail said it planned to carry out the works overnight. The project is expected to boost capacity as electric trains can carry more passengers than diesel ones. Diesel Locomotive Technology. Contents. 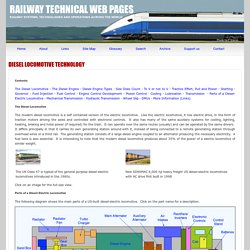 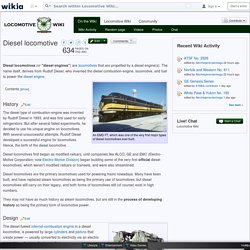 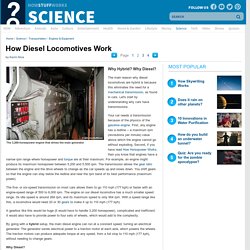 Let's start by understanding why cars have transmissions. Your car needs a transmission because of the physics of the gasoline engine. First, any engine has a redline -- a maximum rpm (revolutions per minute) value above which the engine cannot go without exploding. Second, if you have read How Horsepower Works, then you know that engines have a narrow rpm range where horsepower and torque are at their maximum.

For example, an engine might produce its maximum horsepower between 5,200 and 5,500 rpm. The five- or six-speed transmission on most cars allows them to go 110 mph (177 kph) or faster with an engine-speed range of 500 to 6,000 rpm. A gearbox like this would be huge (it would have to handle 3,200 horsepower), complicated and inefficient. Why Diesel? Diesel engines are more efficient than gasoline engines. Steam locomotive. Steam locomotives were first developed in Great Britain during the early 19th century and dominated railway transport until the middle of the 20th century. 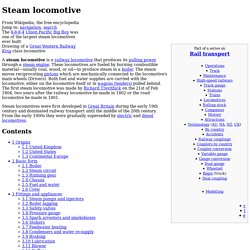 From the early 1900s they were gradually superseded by electric and diesel locomotives. Origins[edit] Stephenson's Rocket 1829, the winner of the Rainhill Trials United Kingdom[edit] United States[edit] The first US patent, US1, was obtained in 1836 by John Ruggles for a Locomotive steam-engine for rail and other roads. Continental Europe[edit] The first railway service in Continental Europe (or for that matter, anywhere outside the UK and the US) was opened on 5 May 1835 in Belgium, between Mechelen and Brussels. 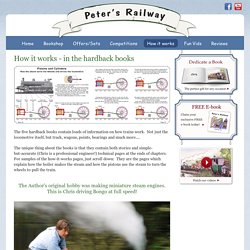 Not just the locomotive itself, but track, wagons, points, bearings and much more.... The unique thing about the books is that they contain both stories and simple-but-accurate (Chris is a professional engineer!) Technical pages at the ends of chapters. The Western Maryland Scenic Railroad. A variety of seating options are available on our daytime scenic excursions! 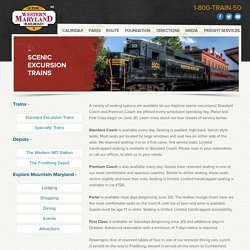 Standard Coach and Premium Coach are offered every scheduled operating day; Parlor and First Class begin on June 20. Learn more about our four classes of service below: Standard Coach is available every day. Train Routes. How the Shinkansen bullet train made Tokyo into the monster it is today. At 10am on 1 October 1964, with less than a week and a half to go before the start of the Tokyo Olympic Games, the two inaugural Hikari Super Express Shinkansen, or “bullet trains,” arrived at their destinations, Tokyo and Osaka. 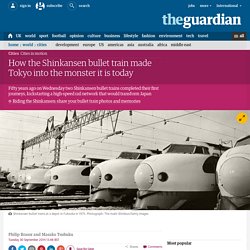 They were precisely on time. Hundreds of people had waited overnight in each terminal to witness this historic event, which, like the Olympics, heralded not just Japan’s recovery from the destruction of the second world war, but the beginning of what would be Japan’s stratospheric rise as an economic superpower. The journey between Japan’s two biggest cities by train had previously taken close to seven hours. The Shinkansen had made the trip in four.