Our Predictions For Search Engines in 2016. Hello Again, I think it’s fair to say that 2016 has started at breakneck pace as far as Google is concerned. 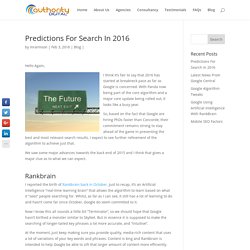 With Panda now being part of the core algorithm and a major core update being rolled out, it looks like a busy year. So, based on the fact that Google are hiring PhDs faster than Concorde, their commitment remains strong to stay ahead of the game in presenting the best and most relevant search results. I expect to see further refinement of the algorithm to achieve just that. We saw some major advances towards the back end of 2015 and I think that gives a major clue as to what we can expect. Rankbrain I reported the birth of Rankbrain back in October. Now I know this all sounds a little bit “Terminator”, so we should hope that Google hasn’t birthed a monster similar to SkyNet. At the moment, just keep making sure you provide quality, media-rich content that uses a lot of variations of your key words and phrases. Knowledge Graph Content. Latest News On the Google Algorithm Updates - Jan 2016. Hello, Derek here, Firstly I would like to wish you a very happy new year, let’s hope it’s a good one with plenty of peace and happiness to go around. 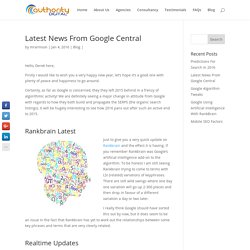 Certainly, as far as Google is concerned, they they left 2015 behind in a frenzy of algorithmic activity! We are definitely seeing a major change in attitude from Google with regards to how they both build and propagate the SERPS (the organic search listings). It will be hugely interesting to see how 2016 pans out after such an active end to 2015.

Google Is Tweaking The Algorithm On Panda and Penguin. RankBrain Artificial Intelligence Now Used In Google Algorithm. Mobile SEO - Important On Page Factors. It’s official, there are now more searches conducted worldwide, on mobile devices than there are on desktop. 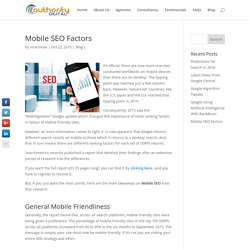 The tipping point was reached just a few months back. However, “advanced” countries, like the U.S, Japan and the U.K reached that tipping point in 2014. Consequently, 2015 saw the “Mobilegeddon” Google update which changed the importance of some ranking factors in favour of mobile friendly sites. However, as more information comes to light, it is now apparent that Google returns different search results on mobile to those which it returns to a desktop search. And, that in turn means there are different ranking factors for each set of SERPS returns. Searchmetrics recently published a report that detailed their findings after an extensive period of research into the differences. If you want the full report (it’s 55 pages long), you can find it by clicking here…and you have to register to receive it.

General Mobile Friendliness Site Speed This is vitally important. Keywords in Domain. The New Google Local 3 Pack. Hi Derek here, In keeping you up to date with what is going on in the dark and hidden world of Google, a recent change has some quite serious implications for local search terms. 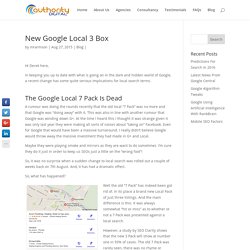 The Google Local 7 Pack Is Dead A rumour was doing the rounds recently that the old local “7 Pack” was no more and that Google was “doing away” with it. This was also in line with another rumour that Google was winding down G+. At the time I heard this I thought it was strange given it was only last year they were making all sorts of noises about “taking on” Facebook.

Maybe they were playing smoke and mirrors as they are want to do sometimes. So, it was no surprise when a sudden change to local search was rolled out a couple of weeks back on 7th August. So, what has happened? Well the old “7 Pack” has indeed been got rid of. However, a study by SEO Clarity shows that the new 3 Pack will show at number one in 93% of cases. Local Search Results – A Seachange The message is clear. Why? The Google Mobile Update And What It Means For Your Website. Hi Derek here, And…it’s algorithm update time again. 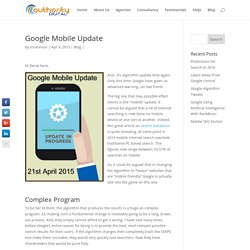 Only this time, Google have given us advanced warning…on two fronts. The big one that may possible effect clients is the “mobile” update. It cannot be argued that a lot of Internet searching is now done via mobile device of one sort or another. Indeed, this great article on search behaviour is quite revealing. So, it could be argued that in changing the algorithm to “favour” websites that are “mobile friendly” Google is actually late into the game on this one. Complex Program To be fair to them, the algorithm that produces the results is a huge an complex program. Panda Google Algorithm Update July 2015. Hello, Derek here. 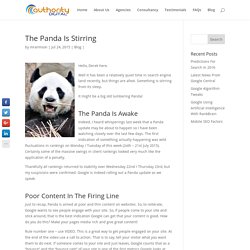 Well it has been a relatively quiet time in search engine land recently, but things are afoot. Something is stirring from its sleep. How To Maximise Your Social Media Efforts. Why Social Media Is Important For SEO in 2015. Why Quality Engaging Content Is Vital For Your Website. Derek Armson SEO Interview With Chris Ogle of Link4Growth. Hi it’s Derek here, I was at the latest Link4Growth meeting last week and Chris Ogle asked if I would give him a “5 minute update” on the state of SEO. 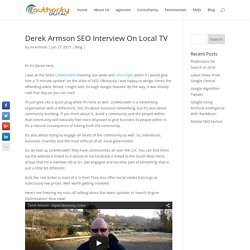 Obviously I was happy to oblige, here’s the offending video, filmed, I might add, through Google Glasses! By the way, it was bloody cold that day (as you can see)! I’ll just give L4G a quick plug while I’m here as well. Link4Growth is a networking organisation with a difference. It’s also about trying to engage all facets of the community as well. So, do look up Link4Growth, they have communities all over the U.K.

And, the real kicker is most of it is free! News On The Latest Google Panda Update October 14. Hi Derek here, I’ve heard it said recently that Google is “on the warpath” and that the range of updates arriving at the moment are like declaring war on digital business. 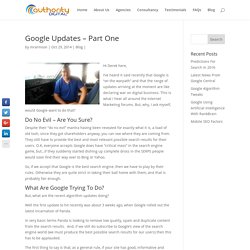 This is what I hear all around the Internet Marketing forums. But, why, I ask myself, would Google want to do that? Do No Evil – Are You Sure? Despite their “do no evil” mantra having been revealed for exactly what it is, a load of old tosh, since they got shareholders anyway, you can see where they are coming from. So, if we accept that Google is the best search engine, then we have to play by their rules. Google Penguin 3.0 Update All You Need To Know. Hello Again, Derek here, and as promised, here’s the second in my series (of two) on current Google algorithm updates. 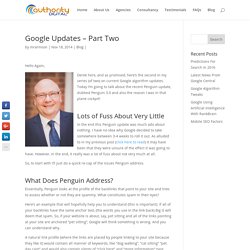 Today I’m going to talk about the recent Penguin update, dubbed Penguin 3.0 and also the reason I was in that plane cockpit! Lots of Fuss About Very Little In the end this Penguin update was much ado about nothing. The Latest on the Google Panda Update December 2014. Hi, Derek here, and I hope you are well and all set fair as the festive season approaches apace. 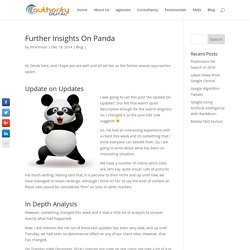 Update on Updates I was going to call this post “An Update On Updates”, but felt that wasn’t quite descriptive enough for the search engines! So, I changed it as the post title now suggests So, I’ve had an interesting experience with a client this week and it’s something that I think everyone can benefit from. So, I am going to write about what has been an interesting situation. We have a number of clients who’s sites are, let’s say, quite visual.