Perennialsolutions. February 12, 2013 User Admin Eric Toensmeier This post is to celebrate the release of my new Perennial Vegetable Gardening DVD! 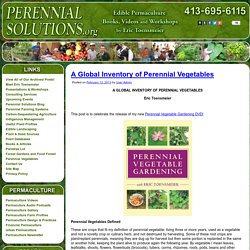 Perennial Vegetables Defined These are crops that fit my definition of perennial vegetable: living three or more years, used as a vegetable and not a novelty crop or culinary herb, and not destroyed by harvesting. Some of these root crops are plant/replant perennials, meaning they are dug up for harvest but then some portion is replanted in the same or another hole, keeping the plant alive to produce again the following year. Climate Zones. Perennialsolutions. Wild Medicinal Plants Archives. Attention Wild Food Aficionados: Fall foraging forges forward, and by that alliteration I mean to say that foraging for wild food “has not yet ended” this fall, so don’t put away your scissors or your plastic knives or your bare hands just yet! 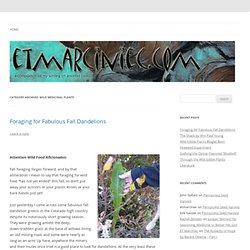 Just yesterday I came across some fabulous fall dandelion greens in the Colorado high country despite its notoriously short growing season. They were growing amidst the deep, down-trodden grass at the base of willows lining an old mining road, and some were nearly as long as an arm! Up here, anywhere the miners and their mules once trod is a good place to look for dandelions. At the very least these early travelers toted the seeds along by accident. Continue reading Heads up, blog readers, especially those of you interested in wild edible plants–I have an exciting announcement to make! New Wild Food Girl site: Oregano Herbal Medicine, Health Benefits, Preparation, Side Effects. Oregano as used as herbal medicine has its earliest beginnings even in early Egyptian times and has been traditionally used as herbal remedy for skin burns, cuts and bruises. 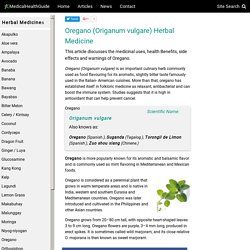 Because of the minty flavor of oregano, it is also used as herbal remedy for sore throat, asthma, colds, coughs and flu. Plant Identification. 4 Step Guide to Building a Herb Spiral. Want to make your own vertical herb spiral garden? 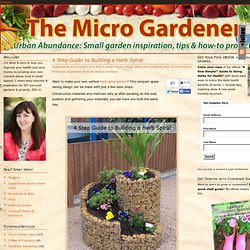 This compact space saving design can be made with just a few basic steps. Construction materials and methods vary so after deciding on the best position and gathering your materials, you can have one built the same day. Depending on your budget and taste, herb spirals can be made very economically or be quite elaborate like this one with stone filled gabion walls. * [The original link to this image (via Cara-Ornamentals) is no longer available. I have no control over this & apologise for any inconvenience but you'll find alternative resources below.] 88 Things That Are Much Better When You're High. Grow Lights Explained CFL LED and HPS easy and cheap to efficient and expensive. Easy Hydroponics - Anybody Can Do This. Aquaponics 4 U. Growing With Hydroponics & Aquaponics. Aquaponic Gardening: Growing Fish and Vegetables Together. What if I told you that you could catch fish for dinner right in your own backyard? 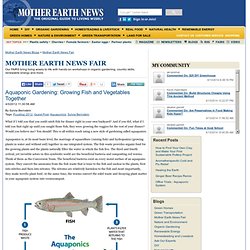 Let the Fish do the work. Starting up an aquaponic gardening system can be a rather easy job, particularly for those who have already tried the hydroponic system. 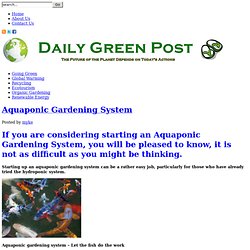 Aquaponic gardening system – Let the fish do the work Yet, many people still have doubts about the efficiency of such a system. If you are one of them, then you most likely wish to know even more about the aquaponic gardening system and how it can improve your life-style. If you would like to learn more… Click here to see my recommendation to you…!!! Rawfully Organic Co-op. Very Edible Gardens. Aquaponics. A small, portable aquaponics system. 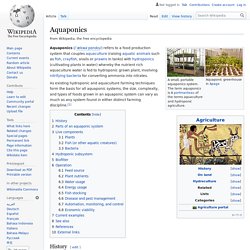 The term aquaponics is a portmanteau of the terms aquaculture and hydroponic agriculture. Aquaponics (/ˈækwəˈpɒnᵻks/) refers to any system that combines conventional aquaculture (raising aquatic animals such as snails, fish, crayfish or prawns in tanks) with hydroponics (cultivating plants in water) in a symbiotic environment. In normal aquaculture, excretions from the animals being raised can accumulate in the water, increasing toxicity. In an aquaponic system, water from an aquaculture system is fed to a hydroponic system where the by-products are broken down by nitrifying bacteria initially into nitrites and subsequently into nitrates, which are utilized by the plants as nutrients, and the water is then recirculated back to the aquaculture system. 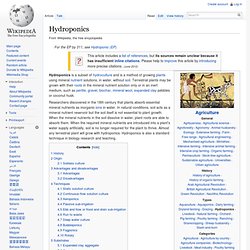 Home - Very Edible Gardens. BeerTools Beer Making Resources and Home Brewing Recipe Calculator and Formulator. Vermiculture: How To Build A Worm Bin the Cheap and Easy Way. By Gaye Levy Contributing Writer for Wake Up World A couple of weeks ago I wrote about using worms to create compost. 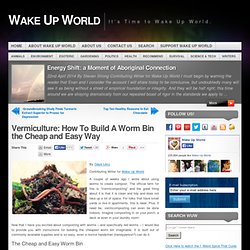 Natural Hebicide. How Weed Killers Work Weed killers, both homemade and commercial products, start by killing the above ground foliage. 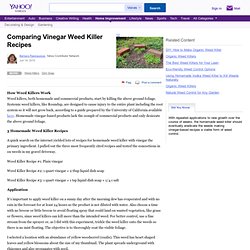 The urban guide to being self sufficient'ish. This is an easy recipe to follow and creates a delightful, if not usual tasting beer. It is very cheap to make and follows a traditionally english recipe. Before hops were widely used in the 17th century all sorts of plant were used to flavor the ale including nettles. (Urtica dioica). Beginner’s Guide to Veganic Gardening.

Vegan-organic gardening avoids not only the use of toxic sprays and chemicals, but also manures and animal remains. Just as vegans avoid animal products in the rest of our lives, we also avoid using animal products in the garden, as fertilizers such as blood and bone meal, slaughterhouse sludge, fish emulsion, and manures are sourced from industries that exploit and enslave sentient beings.