Investing Legend Charlie Munger Cautions Investors on Buying Bitcoin. Veteran investor and chairman of Berkshire Hathaway, Charlie Munger dismissed Bitcoin during a Q&A session, calling it too volatile to be considered a global medium of exchange. 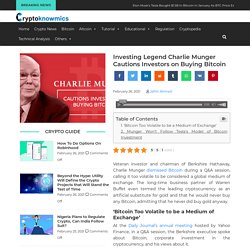 The long-time business partner of Warren Buffet even termed the leading cryptocurrency as an artificial substitute for gold and that he would never buy any Bitcoin, admitting that he never did buy gold anyway. ‘Bitcoin Too Volatile to be a Medium of Exchange’ At the Daily Journal’s annual meeting hosted by Yahoo Finance, in a Q&A session, the Berkshire executive spoke about Bitcoin, corporate investment in the cryptocurrency, and his views about it. On being asked if the biggest threat to banking was Bitcoin or digital wallets like PayPal or Apple Pay, he said: “I don’t think I know what the future of banking is, and how the payment system will evolve.

Jerome Powell Reveals Fed is Eyeing at Issuing a Digital Dollar. Jerome Powell, the Chairman of the Federal Reserve told Congress on Tuesday that the Fed is looking carefully at whether they should issue a digital US dollar. 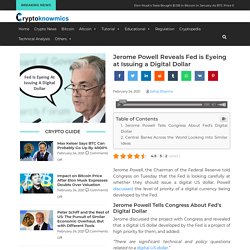 Powell discussed the level of priority of a digital currency being developed by the Fed. Jerome Powell Tells Congress About Fed’s Digital Dollar Jerome discussed the project with Congress and revealed that a digital US dollar developed by the Fed is a project of high priority for them, and added: “There are significant technical and policy questions related to a digital US dollar.” Max Keiser Says BTC Can Probably Go Up By 4000% Wall Street veteran and Bitcoin bull Max Keiser makes an unpredictable BTC prediction and says fiat currency itself is the problem. 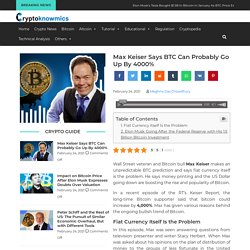 He says money printing and the US Dollar going down are boosting the rise and popularity of Bitcoin. In a recent episode of the RT’s Keiser Report, the long-time Bitcoin supporter said that bitcoin could increase by 4,000%. Max has given various reasons behind the ongoing bullish trend of Bitcoin. Fiat Currency Itself Is the Problem In this episode, Max was seen answering questions from television presenter and writer Stacy Herbert.

Is Bitcoin Headed Towards a Major Correction in 2021? The world’s first and largest cryptocurrency, Bitcoin, is making headlines almost every day by hitting a new ATH. 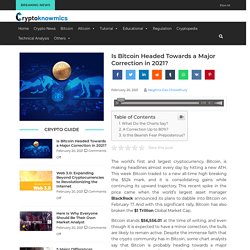 This week Bitcoin traded to a new all-time high breaking the $52k mark, and it is consolidating gains while continuing its upward trajectory. This recent spike in the price came when the world’s largest asset manager BlackRock announced its plans to dabble into Bitcoin on February 17. And with this significant rally, Bitcoin has also broken the $1 Trillion Global Market Cap. Bitcoin stands $56,556.01 at the time of writing, and even though it is expected to have a minor correction, the bulls are likely to remain active. Jeffrey Gundlach Suggests Better Bet on Bitcoin Over Gold. Jeffrey Gundlach, the capital chief of DoubleLine, revealed in reference to the recent rally in the cryptocurrency market that Bitcoin can be a better investment option than Gold. 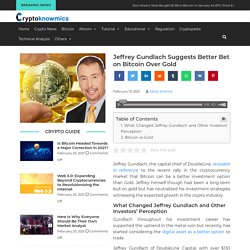 Jeffrey himself though had been a long-term bull on gold but has neutralized his investment strategies witnessing the expected growth in the crypto industry. What Changed Jeffrey Gundlach and Other Investors’ Perception Gundlach throughout his investment career has supported the uptrend in the metal coin but recently, has started considering the digital asset as a better option to trade. Jeffrey Gundlach of DoubleLine Capital, with over $130 million assets under their management, shared in his tweet that he has turned neutral on both Gold and US Dollar, and also stated Bitcoin as “the stimulus asset.” Ethereum (ETH) Hits New All-Time High Above $2,000. The price of Ethereum (ETH) has surged above $2,000 to hit a new record all-time high. 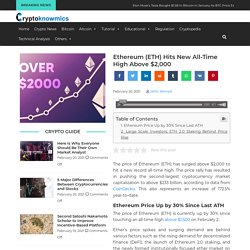 The price rally has resulted in pushing the second-largest cryptocurrency market capitalization to above $233 billion, according to data from CoinGecko. This also represents an increase of 172.5% year-to-date. Ethereum Price Up by 30% Since Last ATH The price of Ethereum (ETH) is currently up by 30% since touching an all-time high above $1,500 on February 2. Activation Date Set for Bitcoin’s Taproot Upgrade. The code for Bitcoin’s Taproot upgrade will be deployed between March 17 and March 3, or even April if needed, as per a public Internet Relay Chat (IRC) discussion. 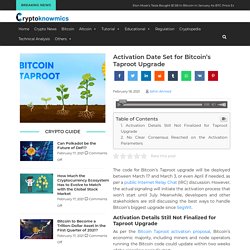 However, the actual signaling will initiate the activation process that won’t start until July. Meanwhile, developers and other stakeholders are still discussing the best ways to handle Bitcoin’s biggest upgrade since SegWit. Activation Details Still Not Finalized for Taproot Upgrade As per the Bitcoin Taproot activation proposal, Bitcoin’s economic majority, including miners and node operators running the Bitcoin code could update within two weeks of the signaling period’s start. 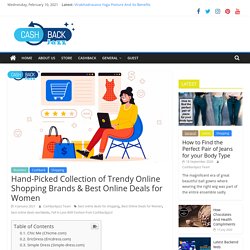 With so much hustling and bustling due to the COVID-19 pandemic across the globe, we have finally entered into the much anticipated new year 2021. No matter what the drastic year 2020 brings to you- look no forward and kickstart your life’s new journey with great style, more comfort, and more uniqueness. There’s nothing better than getting cozy with a warm blanket during the chilling month of January. Hence, it is the perfect time to double your fun giving yourself a perfect makeover and experiment with your style. As the fashion industry is fiercely growing day by day, every shopper now gets the chance to explore millions of branded products as well as money-saving best online deals worldwide at the comfort of their home.

Here we have mentioned a list of the most fashionable online shopping brands that help every girl or women to upgrade their style with ease: Chic Me (Chicme.com) The Indian Parliament Reportedly Plans to Introduce Crypto Bill. The crypto community in India can finally take a breath of relief, as recent reports suggest that it might now bring in an ordinance to put crypto regulations into effect. 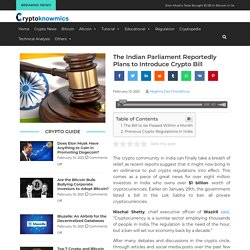 This comes as a piece of great news for over eight million investors in India who owns over $1 billion worth of cryptocurrencies. Earlier on January 29th, the government listed a bill in the Lok Sabha to ban all private cryptocurrencies. Nischal Shetty, chief executive officer of WazirX said, “Cryptocurrency is a sunrise sector employing thousands of people in India. Ethereum Gas Fees Decline Since The ATH But DeFi Users Still Not Happy - News. The scaling issues on the Ethereum blockchain became evident once more recently as the average gas costs reached a new all-time high of above $25. 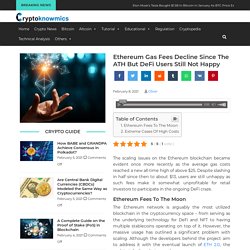 Despite slashing in half since then to about $13, users are still unhappy as such fees make it somewhat unprofitable for retail investors to participate in the ongoing DeFi craze. Ethereum Fees To The Moon The Ethereum network is arguably the most utilized blockchain in the cryptocurrency space – from serving as the underlying technology for DeFi and NFT to having multiple stablecoins operating on top of it.

However, the massive usage has outlined a significant problem with scaling. A Complete Guide on the Proof of Stake (PoS) in Blockchain. Blockchain is a classic example of a distributed system with no central source of truth. Like any distributed database, it cannot have consistency, availability, and partition tolerance simultaneously (following CAP theorem). Most of the blockchains ensure availability and are partition tolerant. Industry Leaders Anticipate Bitcoin Worth More than Gold.

Industry leaders across the globe are anticipating that Bitcoin will be worth more than gold. For instance, Eric Peters, the CEO and co-founder of One River Asset Management, has placed the value of Bitcoin at approximately $500k, while expecting the leading cryptocurrency to be worth more than gold. While Bluford Putnam, chief economist and managing director of CME Group, sees bitcoin as an emerging competitor to gold. One River Asset Management CEO Expects BTC to Worth More Than Gold Just last week, Eric Peters appeared in an interview with Bloomberg where he spoke on cryptocurrencies.

Firstly, he revealed that his asset management holds bitcoin worth over $1 billion. Elon Musk Breaks His Twitter Silence and Sends Dogecoin 50% Up. Elon Musk, the CEO of Tesla and SpaceX, has done it again with another series of Dogecoin-related tweets. The immediate effects of Musk-initiated pumps resulted in a 50% surge for the asset in merely minutes after his tweets. In less than an hour, the token went from $0.39 to a high of $0.60. While this 53% surge was impressive on its own, Doge’s 24-hour performance was even more remarkable – an increase of 80%.

Musk’s Engagement with Dogecoin Continues. How to Mine Ripple Coins. Ripple’s XRP is one of the top cryptocurrencies in the crypto market today. The year 2020 was one of the best years for Ripple as it was performing at its best. The price was reaching places and for a pretty long time, it secured 3rd place in the CoinMarketCap.

Due to this, Ripple’s XRP market cap came down to $11 billion (at the time of writing) from $24 billion on 21st December 2020, i.e., just before the lawsuit was filed. What All You to Know About Best Cashback Offers? In this digitally-challenged world, cashback has become one of the most recognizable, profitable, and effective promotional mechanisms that benefit both businesses and customers alike. For most businesses, it is referred to as a compelling promotional strategy to spellbind millions of shoppers with no or little effort. Nowadays, it’s quite common for shopper enthusiasts to search for a genuine cashback website that can offer them lucrative deals, massive discount offers, and the best cashback offers while staying at home. Tether Market Dominance Drops Below 75% for the First Time. Cynthia Lummis to Launch Financial Innovation Caucus For Crypto Education. U.S. senator Cynthia Lummis has recently announced to launch a Financial Innovation Caucus, to spread crypto education across the fellow senators.

Observing the Possibilities of Crypto-Investments for Perpetual Income - What makes Cryptocurrencies so Intriguing and What makes them so Popular. This Is How To Build Your Marketplace Startup. Why It Is Difficult To Seek Angel Investors For Startup. Grayscale Halts Investment In Its Trusts After Recent Bitcoin Surge. Michael Saylor Advises Musk as Bitcoin Hits New All-Time High.

Know about NEO Cryptocurrency, Its Future And How To Buy It. What is the Easiest Way to Buy Cryptocurrency? Top Bitcoin Wallets Of 2020 To Secure Your Digital Coins. TRX Coins Of Tron Get Listed On Kraken Crypto Exchange. Ripple’s Plea For Dismissing Lawsuit Gets Rejected By Court. Will Bitcoin Follow The High Gold Prices Due To Corona Outbreak. Can Bitcoin Replace Gold As An Investment Option? Bitcoin Mining Pools See Huge Shuffle in Prior To Bitcoin Halving. Australia's NSE Plans DLT Platform To Compete With ASX. Changpeng Zhao's Take on The Upcoming Bitcoin Halving. FXCM Crypto Spreads Down More Than 32% In January 2020. Celsius To Implement Compound Interest On Crypto Deposits. Onecoin Co-Conspirator Pleads Sentence Postponement.

DefiPulse Reports Its Apps Growth Tripled Within a Year. Ray Dalio Says Central Bank Will Continue to go For Gold, Not BTC.