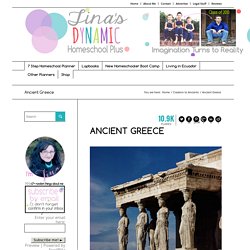 Myths were part of the every day of Greeks. We know about these stories because they have been passed down to us. Also there is much Greek art that has survived to our day. But why study Ancient Greece? Greece has often been called the “birthplace” of Western civilization” because many of their thoughts about science, man, and politics are studied today and respected. Ancient Greece was a world that was dominated by man. Famous Birthday Lessons and Unit Studies. {freebies} Artists Notebooking Pages and ebooks - In All You Do. The Tale of Peter Rabbit Printables - Mamas Learning Corner. This post contains affiliate links which helps support the work of free printables at Mama’s Learning Corner. 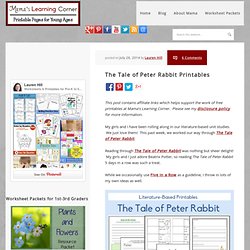 Please see my disclosure policy for more information. My girls and I have been rolling along in our literature-based unit studies. We just love them! This past week, we worked our way through The Tale of Peter Rabbit. Reading through The Tale of Peter Rabbit was nothing but sheer delight! Garden I Spy with Free Printable. The Human Body (Adventures in Lapbooking cont’d!) Ancient Egypt Lapbook download. A friend of ours recently introduced us to a fun concept called lapbooking. 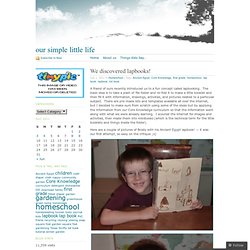 The basic idea is to take a plain ol’ file folder and re-fold it to make a little booklet and then fill it with information, drawings, activities, and pictures related to a particular subject. There are pre-made kits and templates available all over the internet, but I decided to make ours from scratch using some of the ideas but by applying the information from our Core Knowledge curriculum so that the information went along with what we were already learning. I scoured the internet for images and activities, then made them into minibooks (which is the technical term for the little booklets and things inside the folder). Here are a couple of pictures of Brody with his Ancient Egypt lapbook! Collage Details - African History. Beowulf Finale: Fire Dragons and Old English - These Temporary Tents by Aadel Bussinger.

We have completed our reading of Beowulf! 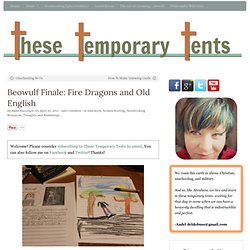 Here is what we covered and discovered: The final chapter of the poem takes place much later in Beowulf’s life than his original encounters with Grendel at Heorot. Beowulf is an old man now, he has ruled his kingdom for many years and the people love him dearly. The Thief and The Dragon In Beowulf’s kingdom there lay a dormant dragon who guarded a mass of wealth and treasure. Beowulf must once again defend the land from a devastating monster! Ten Books About Famous Civil War Era Women - These Temporary Tents by Aadel Bussinger.

This 10 in 10 list is inspired by two amazing books that I recently picked up at the library on our military post. 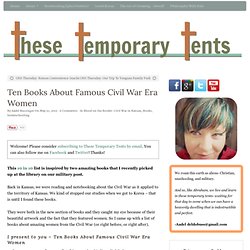 Back in Kansas, we were reading and notebooking about the Civil War as it applied to the territory of Kansas. We kind of stopped our studies when we got to Korea – that is until I found these books. They were both in the new section of books and they caught my eye because of their beautiful artwork and the fact that they featured women. Little Sure Shot Annie Oakley. Check out all the great August famous birthdays over at iHomeschool Network! 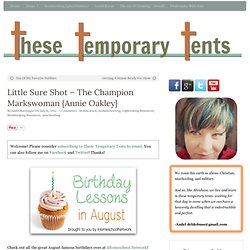 Since we are reading about the West and the Civil War here at home, and since our last birthday unit study was Wild Bill Hickok, I thought that it was only fitting to learn about another character in the Wild West Show- Annie Oakley. Learn About Annie Oakley She was born Phoebe Ann Moses on August 13, 1860 in Ohio. She lived a very poor, harsh life. As a teenager, she began to supplement her family’s income by shooting game, and soon became known as one of the best shots in the area. Introducing a New History Study: Blood on the Border - These Temporary Tents by Aadel Bussinger. I am so excited to share what we have been collecting and researching for the past few months! 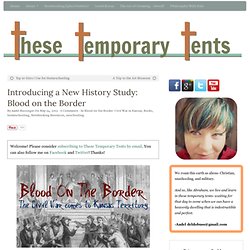 I have mentioned before that Raven chose the Civil War as our topic of study over the summer months. Well, we decided to focus on how the Civil War specifically played out in our state- Kansas. So we have decided to name our study: The Civil War comes to Kansas Territory. The Middle Ages Themed Resources and Freebies. Posted by Sarah on Sep 11, 2013 in Free History & Geography Resources, Freebies, Homeschooling Freebies, Themed Freebies This is the Fourth Post in our Five Week History Themed Series! 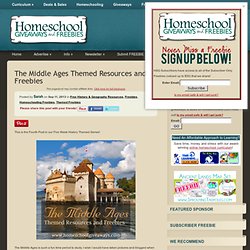 The Middle Ages is such a fun time period to study. Introducing the Civil War Era with "Wild Bill" Hickok - These Temporary Tents by Aadel Bussinger. Need some ideas for unit studies this month? 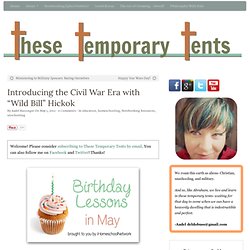 I am participating in the Birthday Lessons in May hop that features fun unit studies on famous people that were born in May. Please click on the link or picture above to find the entire set of lessons! Adventures in MommydomAdventures in Mommydom. Thanks for stopping in! 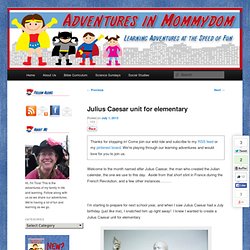 Come join our wild ride and subcribe to my RSS feed or my pinterest board. We're playing through our learning adventures and would love for you to join us. Welcome to the month named after Julius Caesar, the man who created the Julian calendar, the one we use to this day. Aside from that short stint in France during the French Revolution, and a few other instances……… New Zealand Unit Study - These Temporary Tents by Aadel Bussinger. I was kind of puzzled when I asked Denna what kinds of things she wanted to learn about this year and she responded enthusiastically with, “I want to know about New Zealand!” I guess I shouldn’t have been surprised. After all she is a huge fan of Lord of the Rings and The Hobbit, and she loves geography. I like to ask the girls what their interests are from time to time, when we have a little bit of money saved up, so I can buy books and resources to strew for them. FREE Martin Luther King, Jr. Printable Pack - PreK and K! - Blessed Beyond A Doubt.

I believe teaching our children about Martin Luther King, Jr is essential in their education. My children have a hard time grasping this concept because they honestly don’t see anything different about African-Americans except that their skin is darker than ours as Caucasian. Unfortunately, the world does not see all races as equal which is oblivious to me. I must prepare my children to preach the gospel when faced with prejudicial issues. Complete Little House on the Prairie Series Lapbook Set. Charlotte's Web Lapbook. This past fall I did something amazing with my kids. Science - Tina's Dynamic Homeschool Plus. Exploring to Revolution - Tina's Dynamic Homeschool Plus. 3 Flares Twitter 0 Facebook 2 Google+ 0 Filament.io 3 Flares × Vikings Lapbook. Renaissance 1300 to 1600. Medieval Japan 1185 – 1600 A.D. 1 Flares Twitter 0 Facebook 0 Pin It Share 1 1 Google+ 0 Filament.io 1 Flares × (Pic.

Free Squanto Lapbook. American Flag Lapbook. Flag day is coming up as is the Fourth of July. There are many days we fly the flag including Memorial Day and Veterans Day. I made this a while back, but haven’t added it to the website since I changed over four years ago. Free Boxcar Children Resources: Lapbooks, Printables, Activities, and More!