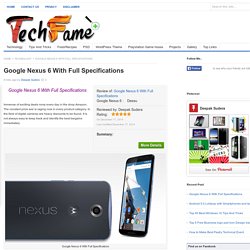 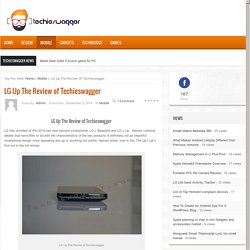 It is a device that by now is well optimized and that allows for a user experience very pleasant. Obviously we do not have the same power of LG G3 but it is still a good product. The launcher allows you to put a lot of icons, has a high degree of customization and folder management is well done. Fast interaction, good experience widgets and much better than other similar end products highly personalized.

It remains a bit ‘too crowded with options area of ​​the notifications with the elements that unfortunately can not be eliminated or alternately selected. Also good web browsing which confirms that the processor works in harmony with the software. Many then installed apps from LG who see FM radio, file manager, LG proprietary applications and a good set of plans. Camera and Multimedia: LG Up The Review of Techieswagger. Smart Watch Motorola 360 - Technology BlogTechnology Blog. 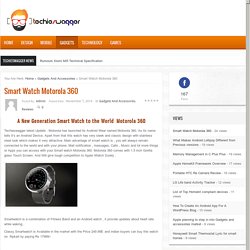 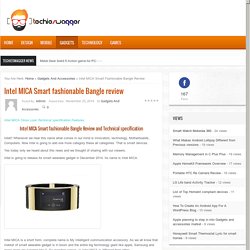 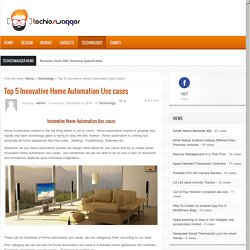 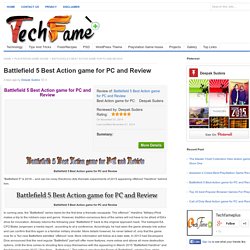 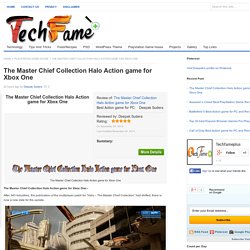 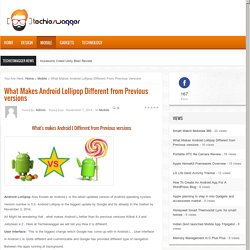 Version number is 5.0. Android Lollipop is the biggest update by Google and its already in the market by November 3, 2014. All Might be wondering that , what makes Android L better than its previous versions Kitkat 4.4 and Jellybean 4.2 . User Interface: This is the biggest change which Google has come up with in Android L . In Android L is Quite different and customizable and Google has provided different type of navigation Between the apps running at background. 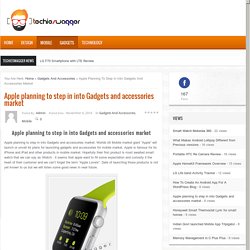 Worlds bit Mobile market giant “Apple” will launch or unveil its plans for launching gadgets and accessories for mobile market. Apple is famous for its iPhone and iPad and other products in mobile market. Hopefully their first product is most awaited smart watch that we can say as iWatch . it seems that apple want to fill some expectation and curiosity it the heart of their customer and we can’t forget the term “Apple Lovers”. List of Top Homekit compliant devices - Technology BlogTechnology Blog. Homekit compliant devices Apple Homekit is a framework , which can be used in home automation to create scenes and to control smart devices in the home through bluetooth , wi-fi or even through internet . all devices must support Homekit accessory protocol also known as HAP protocol. 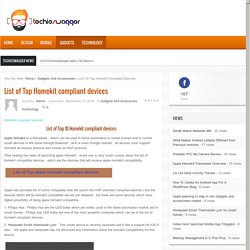 After hearing the news of launching apple Homekit , every one is very mush curious about the list of homekit compatible devices. which are the devices that will receive apple homekit compatibility Apple has provided list of some companies that will launch the HAP (homekit compliant devices ) but the devices which will be homekit compatible are not yet released. but there are some devices which have higher possibility of being apple homekit compatible . 1. Philips Hue : Philips Hue are the LED bulbs which are widely used in the home automation market and in smart homes . 2. 3. 5. The Android Google Glass Review - Technology BlogTechnology Blog. A smart way to see the world through Android Google Glass Review: –Recently in the market we are watching series of new upcoming gadgets like apple’s iWatch , Honeywell thermostat , Samsung galaxy gear , LG Life band activity tracker and Intel MICA smart bangle .in Addition to these series , soon we’ll be able to buy Android Google glass in the market .

Android Google glass is not ordinary glasses but these are smart one. Google glass comes with an inbuilt android 4.0 version like any other android devices. Google glass was earlier launched in early 2014 but it did not become so much popular due to its some technical limitation and somewhat less attractive wearable device we can say. Main attractive sentence which matches with the Android Google glasses are “When fashion meets technology”.

Obviously this is techie gadget like any other android device. Top 4 Free commodities logo design for bloggers. BEST FREE TECHNOLOGY BUSINESS LOGO DESIGN. Sony Xperia Z3 Mobile Specification and Review. Sony Xperia Z3 Mobile Specification and Review Sony Xperia Z3 Conclusion: In the test, the Sony Xperia Z3 Compact conquered the Silver. Sony Xperia E3 Specification And Review. Total War release in Summer. New tablets or smartphones With Android 5.0 Lollipop. You want to know if you can look forward to your smartphone or tablet to android 5.0 lollipop? COMPUTER BILD has collected the most promising candidates for the update. his is the biggest update to the Android-history. In the summer of the Internet giant granted to its own developer conference I / O a first look at the features.

The test showed: In many smartphone and tablet owners wait a fresh design , advanced multitasking performance, an optimized messaging system and various other innovations. “Android 5.0 Lollipop in the test. Top 15 Basic Commands for DOS Windows. Top 15 Basic Commands for DOS Windows Unless you work as a systems engineer, it is difficult to have to deal today with the Windows command line. The command line is the basic tool to perform tasks and commands without using the windows and folders without using the desktop writing on the keyboard in a black screen. Even if it seems outdated and, in some ways it is, there are a few basic commands to run via the command prompt key that everyone should know and that is worth to fix in this article for future memory.

To access the command prompt, run CMD on Start -> Run, or, on Windows 8, accessed from the menu Windows-X (right-click on the lower left). Run the commands write in lowercase and press Sending. 1) CIPHER: - basic command Cipher has merited an article in this blog because of its importance. 2) DRIVERQUERY: – basic command driver query need to do the list of drivers for your computer with all the details. How to Clean and fix your slow PC top 6 basic Utility. Samsung Galaxy Note EDGE Samsung Unveils Phone Review. Samsung unveiled a new tablet phone provider curved screen, “Galaxy Note EDGE” Galaxy Note Edge, during a conference in Berlin on the sidelines of its participation technical exhibition IFA 2014 in Germany.

Samsung Galaxy Note EDGE Samsung Unveils Phone Review The cover of the new phone screen tablet curved sides of the sides of the device, whether traditional or upper side of the new right-hand side, which gives 160 pixels in addition to the degree of clarity of the screen measured 5.6 inches and is working closely QUAD HD. Samsung explained that the phone “Galaxy Note Edge”, has the technical specifications and new features of the phone Galaxy Note 4 “, a tablet phone revealed by the company during the conference itself, except for the battery. And will inform the battery capacity in the new tablet phone, a side screen 0.3000 mA / h, but it will include fast shipping features that increase the speed of charging the battery capacity by 30%.. Samsung Galaxy Y Duos S6102 Dual Sim Mobile Phone. Top 25 Best E-commerce Icons PNG with hover effect.

Never fear, if you want to get Android 4.2 ICS on or gingerbread, Today I will reveal how to Install ICS On JellyBeans Or Gingerbread With Simple App on old devices. To make the Operating system of your device as equal as possible to JellyBeans, you must first think about what going to change. Obviously the parts that are seen more as the status bar and the launcher . Here are the best apps to make your device look like a smartphone with jelly beans.

Let’s start from the launcher: The application in question is Jelly Bean Launcher , very good launcher that brings on our device the appearance of Android 4.2. With this app no ?? 1. This application features a huge customization.