Sanitation in India: The final frontier. CHEER any Indian leader who takes on the taboo of public hygiene, one of the country’s great problems. 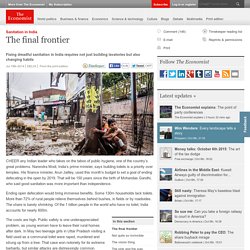 Narendra Modi, India’s prime minister, says building toilets is a priority over temples. His finance minister, Arun Jaitley, used this month’s budget to set a goal of ending defecating in the open by 2019. That will be 150 years since the birth of Mohandas Gandhi, who said good sanitation was more important than independence. Ending open defecation would bring immense benefits. Some 130m households lack toilets. The costs are high. A broader matter is public health. Hundreds of thousands of them die from preventable conditions each year, especially in the north, which has most of the open defecation (see map).

How to do so? Pouring concrete will not in itself solve India’s problems. Evidence is growing that India must urgently correct its cultural practices, though it is sensitive to say so. Sanitation. Example of sanitation infrastructure: Shower, double-vault urine-diverting dry toilet (UDDT) and waterless urinal in Lima, Peru Providing sanitation to people requires a systems approach, rather than only focusing on the toilet or wastewater treatment plant itself.[1] The experience of the user, excreta and wastewater collection methods, transportation or conveyance of waste, treatment, and reuse or disposal all need to be thoroughly considered.[1] The main objective of a sanitation system is to protect and promote human health by providing a clean environment and breaking the cycle of disease.[2] Definition and purposes[edit] The World Health Organization defines the term "sanitation" as follows: 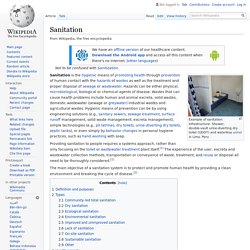 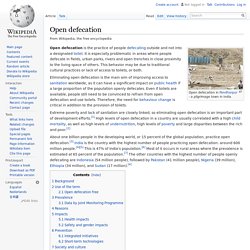 It is especially problematic in areas where people defecate in fields, urban parks, rivers and open trenches in close proximity to the living space of others. This behavior may be due to traditional cultural practices or lack of access to toilets, or both. Diarrhea. Diarrhea, also spelled diarrhoea, is the condition of having at least three loose or liquid bowel movements each day. 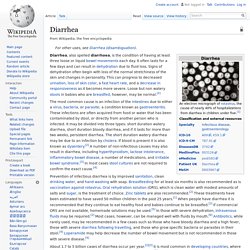 It often lasts for a few days and can result in dehydration due to fluid loss. Signs of dehydration often begin with loss of the normal stretchiness of the skin and changes in personality. This can progress to decreased urination, loss of skin color, a fast heart rate, and a decrease in responsiveness as it becomes more severe. WASH. WASH is an acronym, standing for "Water, Sanitation and Hygiene," a group of interrelated public health issues that are of particular interest to international development programs. 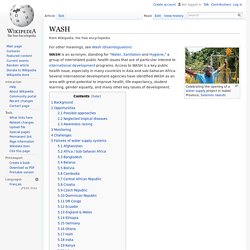 Access to WASH is a key public health issue, especially in many countries in Asia and sub-Saharan Africa. Several international development agencies have identified WASH as an area with great potential to improve health, life-expectancy, student learning, gender equality, and many other key issues of development. Background[edit] Distributing jerrycans to help people store clean drinking water in the Philippines Access to safe water, adequate sanitation, and proper hygiene education can reduce illness and death, and also impact poverty reduction and socioeconomic development.

The concept of WASH groups together water, sanitation, and hygiene because the impact of deficiencies in each area overlap strongly, and so need to be addressed together in order to achieve a strong positive impact on public health. Dry toilet. Schematic of the Dry Toilet [1] A dry toilet is a toilet that operates without flushwater. 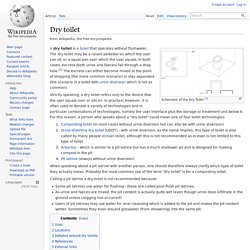 The dry toilet may be a raised pedestal on which the user can sit, or a squat pan over which the user squats. In both cases, excreta (both urine and faeces) fall through a drop hole.[2] The excreta can either become mixed at the point of dropping (the more common scenario) or stay separated (the scenario in a toilet with urine diversion which is not as common). Strictly speaking, a dry toilet refers only to the device that the user squats over or sits on. Diarrhoea Deaths. File:Diarrhoeal diseases world map - DALY - WHO2002.svg. Cancel Edit Delete Preview revert Text of the note (may include Wiki markup) Could not save your note (edit conflict or other problem). 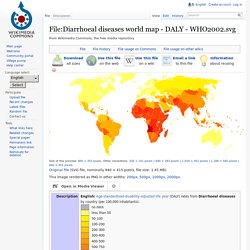 Please copy the text in the edit box below and insert it manually by editing this page. Upon submitting the note will be published multi-licensed under the terms of the CC-BY-SA-3.0 license and of the GFDL, versions 1.2, 1.3, or any later version. See our terms of use for more details. Add a note Draw a rectangle onto the image above (press the left mouse button, then drag and release). 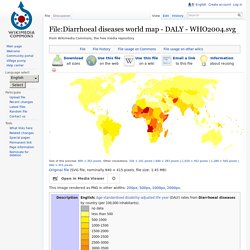