European Development Days. Trade vs Aid - DebateWise. Should the developed world focus on enabling trade or donating aid as a way to help the developing world? 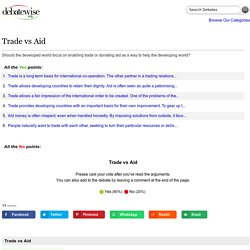 Trade vs Aid Please cast your vote after you've read the arguments.You can also add to the debate by leaving a comment at the end of the page. Yes because... Trade is a long-term basis for international co-operation. The other partner in a trading relationship is likely to represent an ongoing market for goods or services. No because... Aid is linked to need not the ability to engage in trade. Trade allows developing countries to retain their dignity. Not all countries are able to trade successfully. Trade allows a fair impression of the international order to be created.

Aid allows for money in a given country to be allocated well against need. Trade provides developing countries with an important basis for their own improvement. The opportunities for trade are severely limited because of barriers imposed by the international system. Trade does not exist in a vacuum. What do you think? Trade vs. aid: Do countries benefit more from trade (yes), or aid (no)? Fair trade is great Free equipment, money and food- what more could you want. 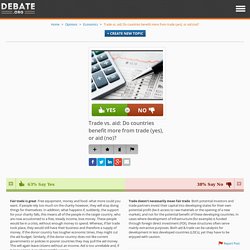 If people rely too much on the charity however, they will stop doing things for themselves. In addition, what happens if, suddenly, the support for your charity falls, this means all of the people in the target country, who are now accustomed to a free, steady income, lose money. These people would be in a crisis, without enough money to spend. Whereas, if fair trade took place, they would still have their business and therefore a supply of money. Aid Vs Trade. Foreign aid had grown significantly in absolute terms (if not as a percentage of GDP in the case of many developed countries) but this has shown up a paradox as aid to Africa has grown,the continent has actually become poorer rather than better off. 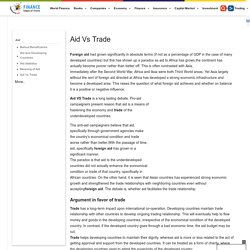 This is often contrasted with Asia. Immediately after the Second World War, Africa and Asia were both Third World areas. Yet Asia largely without the sort of foreign aid directed at Africa has developed a strong economic infrastructure and become a developed area. This raises the question of what foreign aid achieves and whether on balance it is a positive or negative influence. Trade versus Aid. LARGE SCALE AID – the Cahora Bassa scheme in Mozambique Development FACTFILE Source – CIA Fact book 2013 Dams are often seen by countries as a great way of raising the development level of a country. 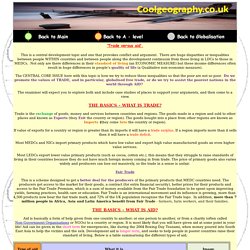 They offer energy for other industries, the energy they produce is environmentally “clean” and the construction of such large structures generates instant employment in construction and its associated industries. Mozambique, one of the poorest countries in the world, attempted to use dam building as a path out of poverty through the construction of the Cahora Bassa Dam. The dam blocks the 4th largest artificial lake in Africa, and is one of 3 major dams along the mighty Zambezi River which passes through Congo, Angola, Zimbabwe and finally Mozambique. . © Rob Gamesby History Pros and cons The dam provides an important power import facility to the South African grid. The dam could produce more energy, but its potential is limited by other dams upstream that keep river flows very low. Kenya – Ngozi Okonjo-Iweala: Want to help Africa? Do business here. Less than 10% of EU aid reaches world's poorest countries, study finds. Less than 10% of EU aid money reaches the countries where it is most needed, according to a study that found levels of assistance had dropped for the second year running. 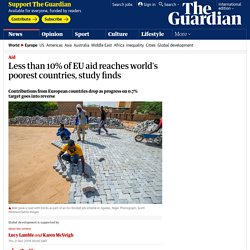 The EU and its member states remain the biggest development donor group in the world – investing €71.9bn ($61bn) in 2018, more than half of global aid – but its contribution was 5.8% lower than in 2017, the European NGO network, Concord, found in its AidWatch report. Progress on meeting the UN target of spending 0.7% of gross national income on aid, laid down in 1970, has gone into reverse, said the group. Their research showed that aid decreased to 0.47% of the EU’s combined GNI last year, compared with 0.49% in 2017 and 0.51% in 2016. Only Sweden, Luxembourg, Denmark and the UK met the 0.7% commitment. The UK’s three main political parties have committed to retaining the aid target. Aid from five countries – Italy, Greece, Finland, Austria and Lithuania – decreased by 10%.