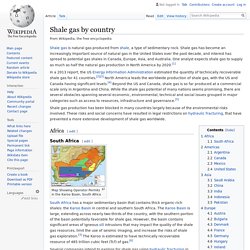 Shale gas has become an increasingly important source of natural gas in the United States over the past decade, and interest has spread to potential gas shales in Canada, Europe, Asia, and Australia. One analyst expects shale gas to supply as much as half the natural gas production in North America by 2020.[1] In a 2013 report, the US Energy Information Administration estimated the quantity of technically recoverable shale gas for 41 countries.[2][3] North America leads the worldwide production of shale gas, with the US and Canada having significant levels.[4] Beyond the US and Canada, shale gas is so far produced at a commercial scale only in Argentina and China. While the shale gas potential of many nations seems promising, there are several obstacles spanning several economic, environmental, technical and social issues grouped in major categories such as access to resources, infrastructure and governance.[5] Shale Gas Map from US EIA.

Shale gas risk or opportunity? Can Europe join the Shale Gas Revolution? The rise and fall of fracking in Europe. This week in the UK, the Labour party announced plans to ban fracking in the UK if elected. Although heavily criticised by one of its biggest union donors, it marks a further shift in attitudes against shale gas in Europe. When the EU’s trade commissioner met Exxon representatives behind closed doors in 2013, his message to the oil men was unambiguous: the US shale revolution is a paradigm shift. Fracking was seen as a “game changer” for Europe, raising hopes of energy independence through a relatively cheap fossil fuel, with a reduced climate impact. In 2011, Poland’s then-president Donald Tusk had already pledged to begin commercial fracking in 2014, after geological surveys estimated the country could possess up to 768bn cubic metres of shale reserves. Hillary Clinton’s US state department was highly supportive. Shale Gas in Europe Archives - Shale Gas : Shale Gas. Shale Gas and EU Energy Security 11 December 2014 The European Parliamentary Research Service’s report Shale Gas and EU Energy Security aims to advise MEPs of... 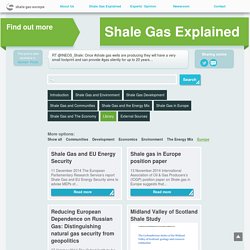