UK economy is braced for interesting times as Brexit phoney war ends. The four months since the Brexit vote have been something of a phoney war. 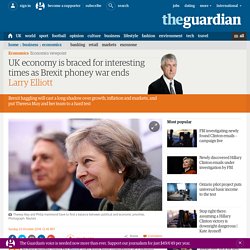 Life for most has trundled on just as before. The shops have been full. Employment has continued to rise. Britain is still the low pay, low productivity country it always was. If someone had left in early June and returned today without access to the news, they would never know there had been a referendum. Boost in funding to promote concept of EU citizenry after UK Brexit vote. The public are already turning against Brexit. When will Theresa May listen? As Theresa May faces her first EU summit today, the other 27 member states will be eyeing her up. 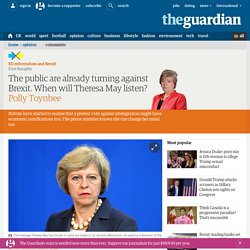 Will she approach them in the fearsome tones of her party conference speech, or is there more emollience beneath that inscrutable coldness? On her real views, we are as much in the dark as they. The message she has chosen to send out today is “no second referendum”, an opening statement of the blindingly obvious. Number 10 adds the banality that she wants “a strong UK as a partner of a strong EU”, but the 27 see Britain – with her party to blame – as feckless wreckers who will leave both sides weaker. Leaders she meets across the table have so far have been equally intransigent: if Britain wants to opt out of fundamental obligations, it can’t opt into fundamental rights. Every soundbite, and signal, from every leader over recent weeks knocks down British wishful thinking that we can stay in the single market and the customs union while denying free movement of people.

People aren’t stupid. A ‘hard Brexit’ may be Britain’s chosen route. Politicians are often accused of saying one thing and meaning another. 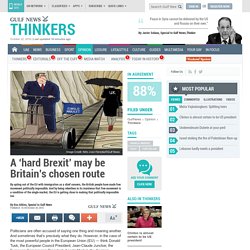 And sometimes that’s precisely what they do. However, in the case of the most powerful people in the European Union (EU) — think Donald Tusk, the European Council President; Jean-Claude Juncker, the European Commission President; Angela Merkel, the German Chancellor; and Francois Hollande, the French President — on two matters they appear to mean exactly what they are saying and that will have profound consequences for United Kingdom Prime Minister Theresa May. The result of the UK’s decision to leave the EU arrived early on a bright Friday morning on June 24. Just after nine o’clock, I interviewed former UK prime minister, Tony Blair, a man for whom the EU is central.

He explained to me — and BBC World News’ millions of viewers — why, in his view, Brexit was a mistake. Four days later, I was at a an EU summit in Brussels. This was an EU summit like no other. Brexit: Crowd-funded legal case wants to see politicians jailed for 'lying' during referendum campaign. A crowd-funded project to prosecute politicians for “lying” during the EU referendum campaign has raised over £175,000 and now wants to see dishonest politicians jailed, the project’s founder has told The Independent. 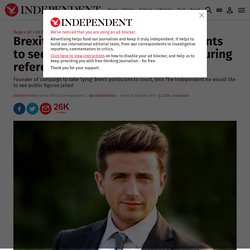 Marcus J. Ball, who founded the Brexit Justice campaign, says his team of lawyers are now building a case to take politicians to court to be held accountable for “dishonest” claims about Brexit. He set up the group online following the EU referendum citing his frustration at what he feels were misleading claims from some politicians during the campaign. After appealing for donations, he received more than £145,000 for legal fees as well as a salary of £32,000 for him to lead the project full time. With the great Marmite war, the reality of Brexit has started to bite. When Marmite and PG Tips enter the Brexit wars, reality starts to bite – and sooner than expected. 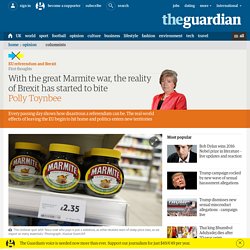 As David Davis was on his feet in the Commons on Wednesday, refusing to defend staying in the single market, the pound plunged again. Anyone changing their money at the airport today will find everything in Europe costing them 23% more than it did on 22 June. Unilever says all its prices must rise by 10% – which is still less than the 15% fall in the pound, so expect worse to come.

The Unilever spat with Tesco over who pays is just a sideshow, as other retailers warn of steep price rises, as we import so many essentials. BT’s chairman says imported phones and broadband hubs are already up 10%. If this were a sterling crisis knowingly created by some extreme anti-business, ideologically-driven Labour government, the attacks on it from all sides would almost certainly see it fall.

EU - Offer European Citizenship to UK citizens. We are European citizens, but our country has voted to strip us of our citizenship. 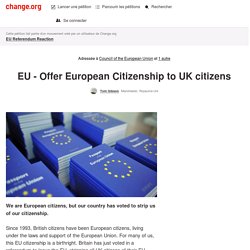 Since 1993, British citizens have been European citizens, living under the laws and support of the European Union. For many of us, this EU citizenship is a birthright. Britain has just voted in a referendum to leave the EU, stripping all UK citizens of their EU citizenship. Those of us who voted to Remain in the EU membership referendum are left without recourse, unable to retain our EU citizenship if we wish to stay a part of this great continental project, to travel and work together in a connected Europe. This is deeply unjust. Northern Ireland could veto Brexit, Belfast high court told. Northern Ireland could veto its exit from the European Union, a lawyer for anti-Brexit campaigners from the region has told the high court in Belfast. 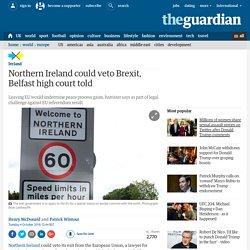 A senior barrister argued that Brexit could not be imposed on Northern Ireland and that the Good Friday agreement, ratified by a referendum in 1998, meant the province had some control over such constitutional changes. Leaving the EU would undermine gains made during the peace process, he told the court on the first day of a legal challenge by political leaders and human rights campaigners against the EU referendum result.

Brexit challenge given go-ahead by Belfast court. Image copyright AFP A cross-party group of politicians in Northern Ireland have won the right to mount a legal challenge over Brexit. 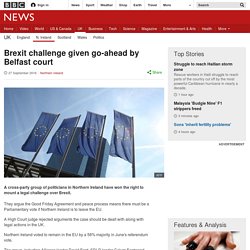 They argue the Good Friday Agreement and peace process means there must be a Parliamentary vote if Northern Ireland is to leave the EU. A High Court judge rejected arguments the case should be dealt with along with legal actions in the UK. Northern Ireland voted to remain in the EU by a 56% majority in June's referendum vote. The group, including Alliance leader David Ford, SDLP leader Colum Eastwood, Sinn Féin MLA John O'Dowd and Steven Agnew, leader of the Green Party, are seeking to prevent the British government from formally triggering Brexit. Theresa May's Brexit plan, the Great Repeal Bill, is very complicated. Prime Minister Theresa May. 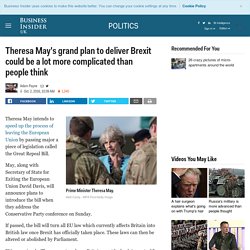 Matt Cardy - WPA Pool/Getty Image Theresa May intends to speed up the process of leaving the European Union by passing major a piece of legislation called the Great Repeal Bill. May, along with Secretary of State for Exiting the European Union David Davis, will announce plans to introduce the bill when they address the Conservative Party conference on Sunday.

If passed, the bill will turn all EU law which currently affects Britain into British law once Brexit has officially taken place. These laws can then be altered or abolished by Parliament. 'Brexit': A Very British Coup. Yanis Varoufakis on negotiating Brexit. Brexit weekly briefing: buckle up – a nasty divorce looks inevitable. Welcome to the Guardian’s weekly Brexit briefing, a summary of developments as Britain edges towards the EU exit. 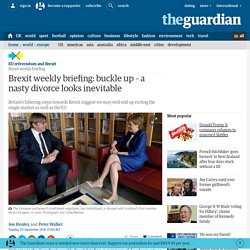 If you’d like to receive it as a weekly email, do please sign up here. Producing the Guardian’s thoughtful, in-depth journalism is expensive – but supporting us isn’t. If you value our Brexit coverage, please become a Guardian supporter and help make our future more secure. Thank you. The big picture. October court date for Brexit challenge.

Image copyright PA A legal challenge over the UK leaving the EU will be heard by the High Court in October, two judges have decided. Invoking Article 50 Explained by the House of Lords. David Davis questioned by MPs over Brexit - Politics live. I do feel sorry for Liam in particular. I’m not a betting man, but if I was I would put a fair amount of money that Liam Fox will resign in a huff within the next 18 months. He doesn’t have a job and he doesn’t appear to have realised that yet. If the United Kingdom doesn’t leave the customs union, which apparently is still an open question in Whitehall, then he is heading a department without purpose because he cannot negotiate all these fantastic trade deals with Papua New Guinea and Tanzania and China and India and Australia.

The new Brit in Brussels is actually a European. Six teenage boys arrested over death of Polish man in Essex. Six teenage boys have been arrested in Harlow, Essex, after an eastern European immigrant died following a brutal street attack which his brother said began after he was heard speaking Polish in the street. A murder investigation was launched on Monday into the death of Arkadiusz Jóźwik, 40, from Poland. The factory worker, who had been living in England for the last four years, was knocked unconscious outside a row of takeaway shops on Saturday and later died in hospital.

Essex police, who were called to the scene shortly after 11.35pm on Saturday, said the attack on Jóźwik and a second Polish man who survived the assault was apparently unprovoked and that one line of inquiry was the possibility of it being a hate crime. During an emotional visit on Tuesday to the scene of the attack, Jóźwik’s brother, Radek, spoke of how there had been a surge in hatred towards eastern Europeans after Britain’s vote to leave the European Union. “We will not leave because of his though. Brexit Briefing: Jean-Claude Juncker’s hunt for popularity.

"If this is supposed to be a galvanising speech, then it's extremely timid stuff," she says, accusing him of "peddling a pretty little assortment of goods" that "do not touch on Europe's big problems" such as Brexit or the refugee crisis. Expel Hungary from EU for hostility to refugees, says Luxembourg. Luxembourg’s foreign minister has called for Hungary to be thrown out of the European Union over its increasingly hostile approach to refugees, as campaigners accuse Viktor Orbán’s hardline government of whipping up xenophobia to block a European plan to relocate asylum seekers. Brexit negotiations 'will not begin for at least one year'