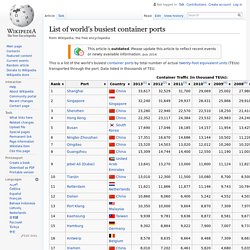 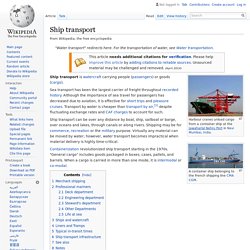 Ship transport is watercraft carrying people (passengers) or goods (cargo). Ship transport can be over any distance by boat, ship, sailboat or barge, over oceans and lakes, through canals or along rivers. Shipping may be for commerce, recreation or the military purpose. Virtually any material can be moved by water; however, water transport becomes impractical when material delivery is highly time-critical.

Containerization revolutionized ship transport starting in the 1970s. Merchant shipping[edit] A nation's shipping fleet (merchant navy, merchant marine, merchant fleet) consists of the ships operated by civilian crews to transport passengers or cargo from one place to another. According to the 2005 CIA World Factbook, the total number of merchant ships of at least 1,000 gross register tons in the world was 30,936. Professional mariners[edit] Deck department[edit] A common deck crew for a ship includes: Other Departments[edit]

Economical and Ecological Comparison of Transport Modes: Road, Railways, Inland Waterways. MV Blue Marlin carrying USS Cole7. Northeast Passage. The Northeast passage (blue) and an alternative route through the Suez Canal (red) The Northeast Passage (abbreviated as NEP) is an Arctic ocean shipping route connecting the Atlantic and Pacific oceans, traversing the Arctic following Russia's and Norway's coasts.[1][2][3] The NEP traverses (from West to East) the Barents Sea, Kara Sea, Laptev Sea, East Siberian Sea, and Chukchi Sea, and it includes the Northern Sea Route (NSR).[2][3] The Northern Sea Route is a portion of the NEP; it is defined in Russian law and does not include the Barents sea and therefore does not reach the Atlantic ocean. 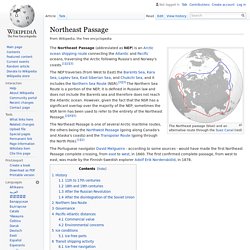 However, given the fact that the NSR has a significant overlap over the majority of the NEP, sometimes the NSR term has been used to refer to the entirety of the Northeast Passage.[2][4][5] Map of the Arctic region showing the Northeast Passage, the Northern Sea Route and Northwest Passage, and bathymetry. Bunker Fuel MARPOL Cargo Ship Exhaust Air pollution. Bunker fuels marpol imo ship air pollution smokestacks. Cruise smoke(3) MJ Newsletter 8 7 10 ISO. Ship smoke. CARGOS, LA FACE CACHÉE DU FRET - Bande annonce.

What type of fuel is used for a ship and what is the average consumption of fuel? - Quora. Cruise Ship Bunker Fuel - "Thick, Tarry Sludge" I read an interesting articleby a staff writer for the Take Part Blog about nasty discharges by cruise ships. 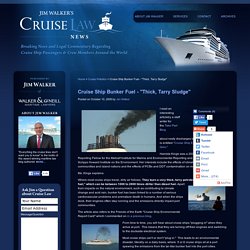 The article is entilted "Cruise Ship Environmental Report Card Grim. " Hamida Kinge was a 2008/09 Environmental Reporting Fellow for the Metcalf Institute for Marine and Environmental Reporting and a 2009 Fellow at the Scripps Howard Institute on the Environment. Her interests include the effects of climate change on coastal communities and island nations and the effects of PCBs and DDT contamination on marine mammal health. Ms. Kinge explains: Where most cruise ships travel, dirty air follows. From impacts on the natural environment, such as contributing to climate change and acid rain, bunker fuel has been linked to a number of serious cardiovascular problems and premature death in humans. The article also refers to the Friends of the Earth "Cruise Ship Environmental Report Card" which I commented on in a previous blog.