Suez Canal blocked by huge container ship. A vast container ship has run aground in the Suez canal after being blown off course by a “gust of wind”, causing a huge traffic jam of vessels at either end of the vital international trade artery. 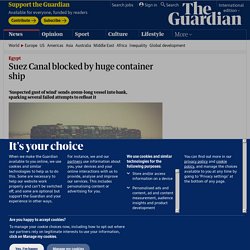 The 220,000-tonne, 400 metre-long Ever Given – a so-called “mega ship” – became stuck near the southern end of the canal on Tuesday. Several attempts to refloat it have failed. Early reports speculated the vessel suffered a loss of power, but the ship’s operator, Evergreen Marine Corp, told Agence-France Presse: “The container accidentally ran aground after a suspected gust of wind hit it. Systems Thinking! Globalization - Rise of Networks.

HOW SUPERPOWERFUL IS USA?