Boris Johnson will get a deal: but it will be a betrayal of the Brexiters. Ignore the blustering brinkmanship: there will be a deal between Britain and the EU. 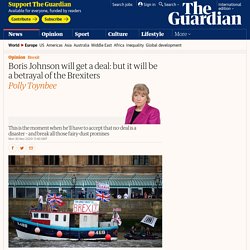 This week, next week or in the final second before the clock strikes 12, this Brexit-crazed government will sign on the line. It needs no crystal ball to foresee a deal. Though this government is disgraceful and dishonest, it is not certifiably insane. It will not kill off the car industry, manufacturing, farming, finance and fishing. It will not cut off security and police relations with Europe. The Faragists, and the hardcore MPs in the European Research Group, want that door-slam, still seeking the forever unattainable sovereignty phantasm. However hard he bluffs and fibs to disguise the inconvenient truth, Johnson will sign a deal that agrees to align with EU standards on working rights, animal welfare, the environment and much else. Lawbreaking clauses in the internal markets bill repudiating last year’s EU withdrawal agreement will be abandoned. Those who shout betrayal will be dead right.

Polexit: 3 reasons why Poland will quit the EU and 3 why it won’t. Press play to listen to this article The recent Polish threat to veto the EU’s budget has ignited a discussion about the country’s future in the bloc. 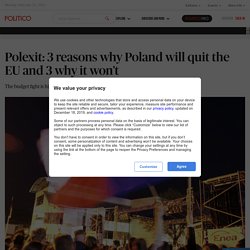 Earlier this month, the Polish government joined Hungary in blocking the EU’s €1.8 trillion budget and pandemic recovery fund because it includes a mechanism linking the bloc’s money with the rule of law. Special report: Preparing for No-Deal. 5 things to know about post-Brexit aviation. As the aviation industry grapples with the coronavirus crisis, it’s easy to forget that the small matter of Brexit is just a few weeks away. 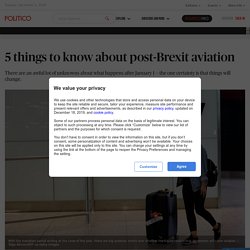 And with the transition period ending at the close of the year — and no trade deal yet in place — there are big question marks over whether the future relationship agreement will cover aviation. With talks still ongoing, there are hopes that aviation will be included — but there is concern in the industry that time is running out to make any necessary preparations. Here's what the end of the transition means for the sector. 1. Will passenger planes still be able to fly between the EU and the U.K. after Brexit? That’s the killer question. Without a new arrangement, in the new year the U.K. stops being a member of the European Common Aviation Area (ECAA) — the world's largest liberalized aviation market.

Outside of the ECAA, the U.K. faces much tighter limits. Despite the looming deadline, many airlines say they’re not too worried. 2. 3. 4. 5. Irish fear loss of British potatoes post Brexit. DUBLIN — Potatoes are a staple food for the Irish, but many of their spuds come from Britain — and that supply chain is about to be smashed by Brexit. 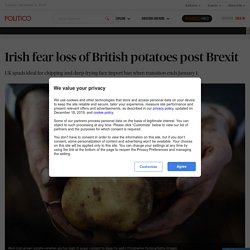 The Irish Department of Agriculture warns that all British potatoes, including seed plants, will be banned from importation once transition arrangements end January 1. Even in the event of a trade deal, the department has told growers, processors and distributors that the flow of British potatoes to Ireland will stop January 1 and not be restored for months, because Britain’s application to export potatoes “must go through the EU law-making process.” Ireland’s food promotion agency, Bord Bia, says one in four Irish people visits their local “chipper” for this guilty-pleasure meal at least once a week. Fast food chains are scrambling to find alternative sources for the 80,000 tons of British-made chips normally consumed in Ireland annually. Only about 10,000 tons of chip-grade potatoes are grown within Ireland. Could a no-deal Brexit push Wales towards independence? Brexit: Endgame - The Hidden Money, with Stephen Fry. 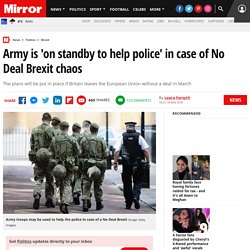 Plans have been put into motion for soldiers to help the police and NHS if the UK ends up leaving the EU without a deal in March, it is claimed. As well as the thousands of military troops already set to be deployed under the proposals, an additional 1,200 troops will be on 24-hour standby, it is said. Sunday Times reports that this will be overseen by around 20 Operation Temperer officers - who are typically reserved for army response to terror attacks. The team were ordered last week to step up no-deal Brexit planning. Members of the military will help to keep order and bring medical supplies to hospitals, and also assist with traffic problems close to ports such as Dover. Army boss Sir Nick Carter told the paper troops are on standby to take part in a No Deal scenario. He said: "What we always do is make sensible contingency plans for all sorts of eventualities. Army's secret plans to put troops on streets in wake of a 'No Deal' Brexit.

Army's secret plans to put troops on the streets to deal with potential chaos in the wake of a 'No Deal' Brexit Military drawn up plans on how Operation Temperer can help amid Brexit chaosPlans for troops include delivery of medicines to hospitals across the country Defence Staff General Sir Nick Carter said army 'stand ready to help' in a no deal By Sophie Law For Mailonline Published: 04:51 EST, 18 November 2018 | Updated: 06:16 EST, 19 November 2018. 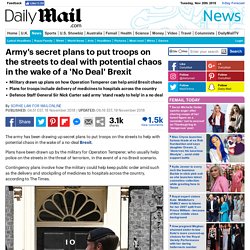