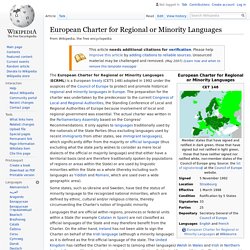 The preparation for the charter was undertaken by the predecessor to the current Congress of Local and Regional Authorities, the Standing Conference of Local and Regional Authorities of Europe because involvement of local and regional government was essential. The actual charter was written in the Parliamentary Assembly based on the Congress' Recommendations. Some states, such as Ukraine and Sweden, have tied the status of minority language to the recognized national minorities, which are defined by ethnic, cultural and/or religious criteria, thereby circumventing the Charter's notion of linguistic minority. The charter provides a large number of different actions state parties can take to protect and promote historical regional and minority languages. Linguistic maps of Europe. List of territorial entities where German is an official language - Wikipedia. Legal statuses of German in Europe: "German Sprachraum": German is (co-)official language and first language of the majority of the population German is a co-official language, but not the first language of the majority of the population German (or a German dialect) is a legally recognized minority language (Squares: Geographic distribution too dispersed/small for map scale) Approximate distribution of native German speakers (assuming a rounded total of 95 million) worldwide. 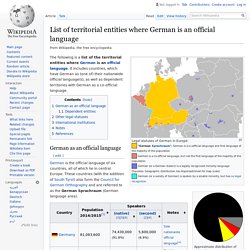 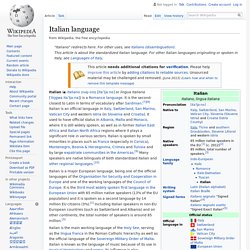 For other Italian languages originating or spoken in Italy, see Languages of Italy. Italian ( italiano [itaˈljaːno] or lingua italiana [ˈliŋɡwa itaˈljaːna]) is a Romance language. It is the second-closest to Latin in terms of vocabulary after Sardinian.[7][8] Italian is an official language in Italy, Switzerland, San Marino, Vatican City and western Istria (in Slovenia and Croatia). It used to have official status in Albania, Malta and Monaco, where it is still widely spoken, as well as in former Italian East Africa and Italian North Africa regions where it plays a significant role in various sectors.

List of countries where Spanish is an official language - Wikipedia. Community of Portuguese Language Countries - Wikipedia. International organization We ask you, humbly, to help. 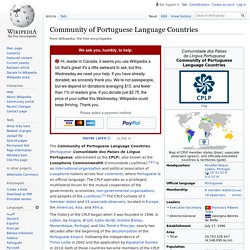 Hi, reader in Canada, it seems you use Wikipedia a lot; that's great! It's a little awkward to ask, but this Wednesday we need your help. If you have already donated, we sincerely thank you. We’re not salespeople, but we depend on donations averaging $15, and fewer than 1% of readers give. Thank you! The Community of Portuguese Language Countries (Portuguese: Comunidade dos Países de Língua Portuguesa; abbreviated as the CPLP), also known as the Lusophone Commonwealth (Comunidade Lusófona),[1][2] is an international organization and political association of Lusophone nations across four continents, where Portuguese is an official language. History[edit] The Community of Portuguese Language Countries was officially founded on 17 July 1996 at the 1st CPLP Heads of State & Government Summit, in Lisbon, Portugal. Structure[edit] The CPLP is financed by its member states.[3] List of territorial entities where French is an official language - Wikipedia.

Dutch language - Wikipedia. Dutch ( Nederlands ) is a West Germanic language that is spoken in the European Union by about 23 million people as a first language—including most of the population of the Netherlands and about sixty percent that of Belgium—and by another 5 million as a second language.[2][3][5][6] It is the third most widely spoken Germanic language, after German and English. 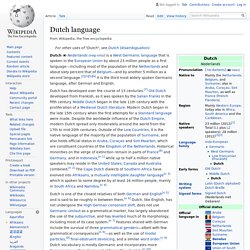 Dutch has developed over the course of 15 centuries.[7] Old Dutch developed from Frankish, as it was spoken by the Salian Franks in the fifth century. Middle Dutch began in the late 11th century with the proliferation of a Medieval Dutch literature. Modern Dutch began in the late 15th century when the first attempts for a Standard language were made. Despite the worldwide influence of the Dutch Empire, modern Dutch spread only moderately around the world from the 17th to mid-20th centuries.