Moral Machines: How culture changes values​ Is There (Still) Such A Thing As European Identity? A Europe of cultures or a culture of Europe? Europe is a civilization, a geographical, political and economic entity. 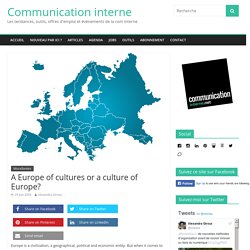 But when it comes to identity, it becomes much more complex. What is won through enlargement is lost in cohesion. According to a survey (Eurobarometer, 2008) 91% of Europeans feel attached to their nations and only 49% to the European Union. In this context, the question to be asked is whether EU accession of individual nations deconstructs their national cultures and identities. The nature of nationality in a cosmopolitan Europe, the rights of citizenship, and the viability of a multicultural society across Europe are questions that have to be addressed. First of all, it can be stated that EU accession of individual nations does not deconstruct their national cultures and identities since it has been argued that a European identity does not exist. Politics influences culture and national identities are shaped by Europe. Bibliography \ Caplan, R and Feffer, J. What are European values?

The larger the EU becomes, the more important it is for the people who live in it to realise that their union has been built on common values. 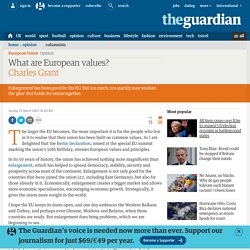 So I am delighted that the Berlin declaration, issued at the special EU summit marking the union's 50th birthday, stresses European values and principles. In its 50 years of history, the union has achieved nothing more magnificent than enlargement, which has helped to spread democracy, stability, security and prosperity across most of the continent. Enlargement is not only good for the countries that have joined the union (22, including East Germany), but also for those already in it. Economically, enlargement creates a bigger market and allows more economic specialisation, encouraging economic growth. Atlas of European Values. Culture of Europe - Wikipedia. Europa and the Bull on a Greek vase, circa 480 BC The culture of Europe is rooted in the art, architecture, music, literature, and philosophy that originated from the European cultural region.[1] European culture is largely rooted in what is often referred to as its "common cultural heritage".[2] Definition[edit] Because of the great number of perspectives which can be taken on the subject, it is impossible to form a single, all-embracing conception of European culture.[3] Nonetheless, there are core elements which are generally agreed upon as forming the cultural foundation of modern Europe.[4] One list of these elements given by K. 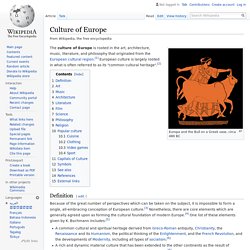 Bochmann includes:[5] Berting says that these points fit with "Europe's most positive realisations".[7] The concept of European culture is generally linked to the classical definition of the Western world. Art[edit] The earliest European sculpture to date portrays a female form, and has been estimated at dating from 35,000 years ago. Music[edit] Literature[edit] Etiquette in Europe - Wikipedia.

Despite this heterogeneity, many points of etiquette have spread through Europe and many features are shared. 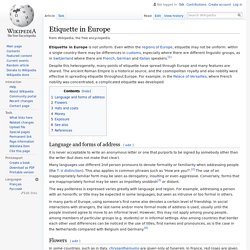 The ancient Roman Empire is a historical source, and the cosmopolitan royalty and also nobility were effective in spreading etiquette throughout Europe. For example, in the Palace of Versailles, where French nobility was concentrated, a complicated etiquette was developed. Language and forms of address[edit] It is never acceptable to write an anonymous letter or one that purports to be signed by somebody other than the writer (but does not make that clear). Many languages use different 2nd person pronouns to denote formality or familiarity when addressing people (the T–V distinction). The way politeness is expressed varies greatly with language and region. In many parts of Europe, using someone's first name also denotes a certain level of friendship. Flowers[edit] In some countries, such as in Italy, chrysanthemums are given only at funerals. Europeanism - Wikipedia.

This article is about the political doctrine of a common European culture. 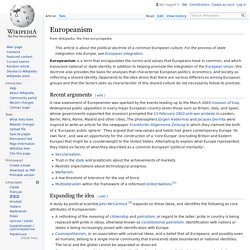 For the process of state integration into Europe, see European integration. Europeanism is a term that encapsulates the norms and values that Europeans have in common, and which transcend national or state identity. In addition to helping promote the integration of the European Union, this doctrine also provides the basis for analyses that characterise European politics, economics, and society as reflecting a shared identity. Opponents to the idea stress that there are various differences among European groups and that the factors seen as characteristic of this shared culture do not necessarily follow its premise. Recent arguments[edit] A new assessment of Europeanism was sparked by the events leading up to the March 2003 invasion of Iraq.