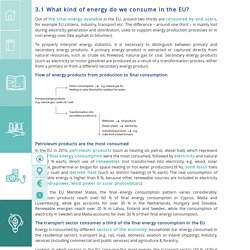 Out of the total energy available in the EU, around two thirds are consumed by end users, for example EU citizens, industry, transport etc. The difference – around one third – is mainly lost during electricity generation and distribution, used to support energy production processes or in non-energy uses (like asphalt or bitumen). To properly interpret energy statistics, it is necessary to distinguish between primary and secondary energy products. A primary energy product is extracted or captured directly from natural resources, such as crude oil, firewood, natural gas or coal. Secondary energy products (such as electricity or motor gasoline) are produced as a result of a transformation process, either from a primary or from a different secondary energy product. Germany’s energy consumption and power mix in charts. Energy in the United Kingdom - Wikipedia. Energy use in the United Kingdom stood at 2,249 TWh (193.4 million tonnes of oil equivalent) in 2014.[1] This equates to energy consumption per capita of 34.82 MWh (3.00 tonnes of oil equivalent) compared to a 2010 world average of 21.54 MWh (1.85 tonnes of oil equivalent).[2] Demand for electricity in 2014 was 34.42GW on average[3] (301.7TWh over the year) coming from a total electricity generation of 335.0TWh.[4] Successive UK governments have outlined numerous commitments to reduce carbon dioxide emissions. 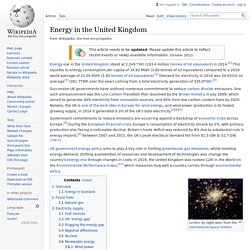 One such announcement was the Low Carbon Transition Plan launched by the Brown ministry in July 2009, which aimed to generate 30% electricity from renewable sources, and 40% from low carbon content fuels by 2020. Notably, the UK is one of the best sites in Europe for wind energy, and wind power production is its fastest growing supply, in 2014 it generated 9.3% of the UK's total electricity.[5][6][7] Overview[edit] 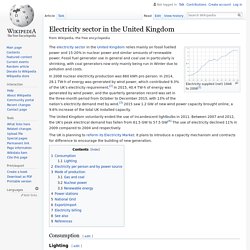 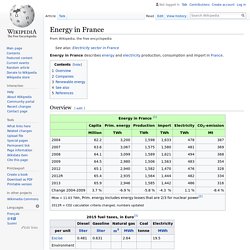 Overview[edit] Companies[edit] Électricité de France (EDF) is the main electricity generation and distribution company in France. It was founded on April 8, 1946 as a result of the nationalisation of a number of electricity producers, transporters and distributors by the Communist Minister of Industrial Production Marcel Paul. Until November 19, 2004 it was a government corporation, but it is now a limited-liability corporation under private law (société anonyme). Electricity sector in France - Wikipedia. The electricity sector in France is dominated by nuclear power, which accounted for 72.3% of total production in 2016, while renewables and fossil fuels accounted for 17.8% and 8.6%, respectively.[1] France has the largest share of nuclear electricity in the world. 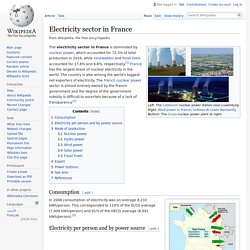 The country is also among the world's biggest net exporters of electricity. The French nuclear power sector is almost entirely owned by the French government and the degree of the government subsidy is difficult to ascertain because of a lack of transparency.[2] EU Energy Pocketbook 2017. World Energy Resources Full report 2016.10.03. Renewable energy in Italy.

Renewable energy has developed rapidly in Italy over the past decade and provided the country a means of diversifying from its historical dependency on imported fuels. 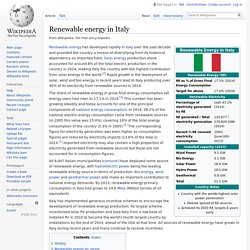 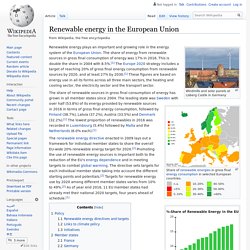 The share of energy from renewable sources in gross final consumption of energy was 17% in 2016. This is double the share in 2004 with 8.5%.[1] The Europe 2020 strategy includes a target of reaching 20% of gross final energy consumption from renewable sources by 2020, and at least 27% by 2030.[1] These figures are based on energy use in all its forms across all three main sectors, the heating and cooling sector, the electricity sector and the transport sector.