Nicola Sturgeon: second Scottish independence poll highly likely. Scotland is on the brink of staging a fresh referendum on independence after Nicola Sturgeon requested talks with the EU on separate membership after the UK’s vote to leave. 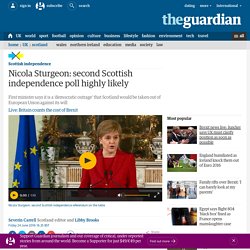 The first minister said she believed a second referendum on independence was highly likely after Scotland voted overwhelmingly to remain within the EU, but was unable to prevent the leave campaign winning by 52% to 48% across the UK as a whole. Sturgeon said that was a “democratic outrage” and constituted the clear, material change in Scotland’s circumstances referred to in the Scottish National party’s carefully worded manifesto commitment in May to hold a second independence vote if needed. “It is a significant material change in circumstances. The English have placed a bomb under the Irish peace process. The rather patronising English joke used to be that whenever the Irish question was about to be solved, the Irish would change the question. 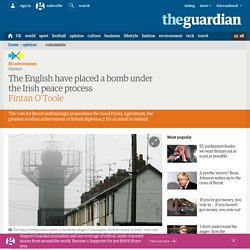 And now, when the Irish question seemed indeed to have been solved, at least for a generation, it is the English who have changed the question. Recklessly, casually, with barely a thought, English nationalists have planted a bomb under the settlement that brought peace to Northern Ireland and close cordiality to relations between Britain and Ireland. To do this seriously and soberly would have been bad. To do it so carelessly, with nothing more than a pat on the head and a reassurance that everything will be all right, is frankly insulting. Just five years ago, when Queen Elizabeth became the first reigning British monarch to visit southern Ireland in a century, there was a massive sense of relief. I never imagined then that I would ever feel bitter about England again. What will now happen is not that the old border will come back. Gerry Adams says Brexit could lead to Northern Ireland leaving the UK. SNP seeks a way to avoid border checkpoints after independence.

Scots to gauge support for independence after Brexit 'gamechanger' EDINBURGH Tens of thousands of Scottish nationalists are to fan out across Scotland, knocking on doors to find out if there is support for a new vote on independence that could make or break First Minister Nicola Sturgeon. 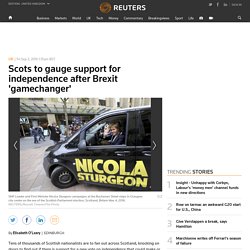 Sturgeon says she will only hold a second independence referendum when she knows it has the backing of Scottish voters, but Britain's decision to leave the EU has reshaped the political landscape and questions about Scotland's future are being asked again. Support for EU membership among Scots in the June "Brexit" referendum was 62 percent, putting Scotland at odds with much of the rest of Britain. The prospect of leaving the EU has disgruntled many Scots - including some of those who voted "no" to an independent Scotland two years ago because they feared independence would mean losing EU membership. While most Scots still do not back independence, opinion polls have narrowed and another Scottish vote could prove highly disruptive as Britain grapples with its EU exit. 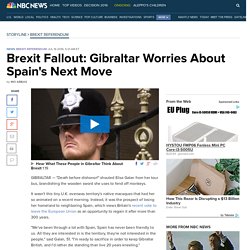 " shouted Elisa Galan from her tour bus, brandishing the wooden sword she uses to fend off monkeys. It wasn't this tiny U.K. overseas territory's native macaques that had her so animated on a recent morning. Instead, it was the prospect of losing her homeland to neighboring Spain, which views Britain's recent vote to leave the European Union as an opportunity to regain it after more than 300 years. "We've been through a lot with Spain, Spain has never been friendly to us.

All they are interested in is the territory, they're not interested in the people," said Galan, 51. Along with such defiance, a sense of dismay has settled on the enclave as its 30,000 residents — and the thousands of Spaniards who commute in for work — wait to see how Madrid will act when Britain divorces the EU. Gibraltar is conspicuously British, despite its location at the southern tip of Spain, less than nine miles from North Africa. "I'm sick of saying it. Brexit: How Gibraltar could opt to remain in the EU. Image copyright AFP If there is one place in the UK that definitely doesn't want to leave the EU it is Gibraltar. 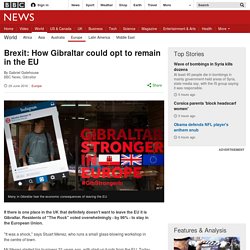 Residents of "The Rock" voted overwhelmingly - by 96% - to stay in the European Union. "It was a shock," says Stuart Menez, who runs a small glass-blowing workshop in the centre of town. Mr Menez started his business 21 years ago, with start-up funds from the EU. Today his priority isn't funding, but access. "The biggest issue we're facing is a free-flowing border, for people visiting Gibraltar and for the goods that we import. "It has to travel through the European Union to get to us. Gibraltar looks like a little bit of England transported to a rocky outcrop less than 10 miles (16km) from the coast of North Africa: red telephone boxes; bobbies-on-the-beat with their distinctive helmets; Marks and Spencer on the high street.