E.U. Rejects Italy’s Budget, and Populists Dig In. Fear and anger won the election in Brazil. It’s a wake-up call to the world. As goes Brazil, so goes democracy? 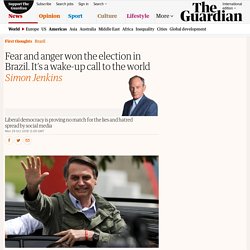 It is no good outsiders pouring contempt on Jair Bolsonaro, victor in Sunday’s Brazilian presidential election. He is the choice of his people. For non-Brazilians, it is what he represents, not what he says, that matters. Brazil has been one of the world’s most exciting emergent nations, yet its evolution over 30 years from dictatorship to hesitant democracy seems to have stalled.

Bolsonaro has exploited the oldest politics, that of self-interest, and also the newest, that of anger, polarisation and fear. In any country, the apparent breakdown of social order will drive voters to extremism. The lesson for champions of open democracy is glaring. Every continent is now seeing the emergence of (mostly) rightwing disrupters. The EU Is Sleepwalking to Disaster. The battle for Europe's soul may be lost – the fight against the populists will be about starting afresh. Earlier this month, a group of 30 writers, historians and Nobel laureates – including Bernard-Henri Lévy, Milan Kundera, Salman Rushdie, Orhan Pamuk, Mario Vargas Llosa and Adam Michnik – published a manifesto in several newspapers all around Europe. 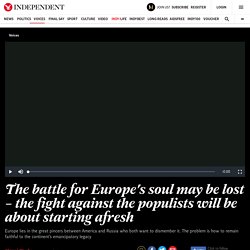 They claimed that Europe as an idea is “coming apart before our eyes”. “We must now fight for the idea of Europe or see it perish beneath the waves of populism,” they wrote. “We must rediscover political voluntarism or accept that resentment, hatred and their cortege of sad passions will surround and submerge us.” This manifesto is deeply flawed: just carefully reading it makes it clear why populists are thriving. 'A Farage in every country': Barnier warns of existential threat to EU. The European Union’s Brexit negotiator Michel Barnier has called on pro-EU forces to defend the fragile union from populist forces, because he said there was now “a Farage in every country”. 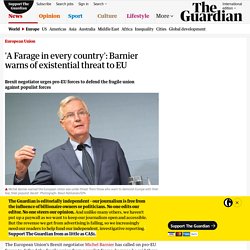 In a speech at the conference of the powerful centre-right European People’s party, Barnier did not go into details of the deadlocked Brexit negotiations, but warned the EU project was “under threat”. “We will have to fight against those who want to demolish Europe with their fear, their populist deceit,” he told more than 700 EPP delegates in Helsinki, before naming the former Ukip leader Nigel Farage.

In a wide-ranging speech that moved from European defence to electric vehicles, he mentioned Brexit only to promise to “fulfill my Brexit mission to the end” and make a brief opening joke that his speech would be short because “the clock is ticking”. “We must also respond to those who think that defending Europe belongs to one single party,” Barnier said, without mentioning Macron by name. The rise of the far-right in Germany. Beware the illiberal alliance of Poland and Hungary, a grave threat to the EU.

It’s ugly and on the rise; and it’s hard to see how it can end well. 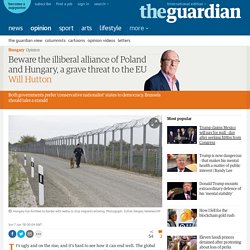 The global rise of conservative nationalism with the aim of creating “national communities” – directed by an unchallengeable leader to defend special national values, controlling borders against the virus of immigrants and “foreign” influence – is the menace of our times. It is the recipe for domestic repression, crony capitalism, massive corruption, implosion of the rule of law, the rise of racism and international conflict. The values that underpinned the postwar liberal order that conferred peace, tolerance and prosperity are being torched before our eyes. It is time to take a stand. Russia and China are the international standard-bearers of this malign credo, flanked by Turkey and India, and openly admired by the conservative nationalists in power in Poland and Hungary – and by Donald Trump, Nigel Farage and a leavening of extreme Tory Brexiters. Just before Christmas the EU said enough. Never-Before-Used Article 7 Evoked: EU Launches Legal Action Against Poland.

Over the weekend, the European Commission launched legal action against Poland’s conservative government over the controversial new law that Warsaw claims is designed purely to reform the country’s judicial system. 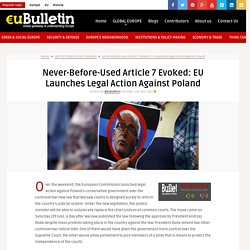 Under the new legislation, the justice minister will be able to unilaterally replace the chief justices of common courts. The move came on Saturday (29 July), a day after Warsaw published the law following the approval by President Andrzej Duda despite mass protests taking place in the country against the law. President Duda vetoed two other controversial reform bills. Rule of Law: European Commission acts to defend judicial independence in Poland. The 'nuclear option': What Article 7 could mean for Poland, and how it could engulf May in fresh Brexit row. What is ‘Article 7’ and why was it triggered against Poland? The European Commission on Wednesday (December 20) triggered ‘Article 7’ disciplinary measures against Poland in an unprecedented move aimed at defending judicial independence in the country. 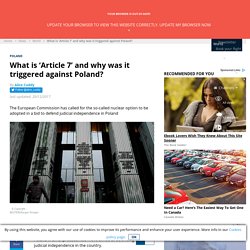