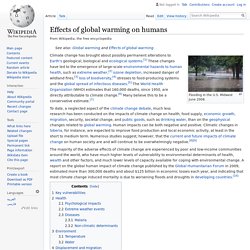 Midwest June 2008. Climate change has brought about possibly permanent alterations to Earth's geological, biological and ecological systems.[1] These changes have led to the emergence of large-scale environmental hazards to human health, such as extreme weather,[2] ozone depletion, increased danger of wildland fires,[3] loss of biodiversity,[4] stresses to food-producing systems and the global spread of infectious diseases.[5] The World Health Organization (WHO) estimates that 160,000 deaths, since 1950, are directly attributable to climate change.[6] Many believe this to be a conservative estimate.[7] To date, a neglected aspect of the climate change debate, much less research has been conducted on the impacts of climate change on health, food supply, economic growth, migration, security, societal change, and public goods, such as drinking water, than on the geophysical changes related to global warming. Human impacts can be both negative and positive. 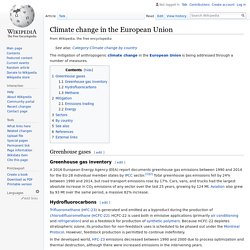 Greenhouse gases[edit] Greenhouse gas inventory[edit] A 2016 European Energy Agency (EEA) report documents greenhouse gas emissions between 1990 and 2014 for the EU-28 individual member states by IPCC sector.[1][2] Total greenhouse gas emissions fell by 24% between 1990 and 2014, but road transport emissions rose by 17%. Cars, vans, and trucks had the largest absolute increase in CO2 emissions of any sector over the last 25 years, growing by 124 Mt. Aviation also grew by 93 Mt over the same period, a massive 82% increase. Hydrofluorocarbons[edit] Trifluoromethane (HFC-23) is generated and emitted as a byproduct during the production of chlorodifluoromethane (HCFC-22). In the developed world, HFC-23 emissions decreased between 1990 and 2000 due to process optimization and thermal destruction, although there were increased emissions in the intervening years. Methane[edit] Climate change in Europe - Wikipedia. Climate change in Europe describes the climate change related issues in Europe. 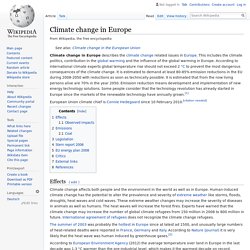 This includes the climate politics, contribution in the global warming and the influence of the global warming in Europe. According to international climate experts global temperature rise should not exceed 2 °C to prevent the most dangerous consequences of the climate change. It is estimated to demand at least 80-85% emission reductions in the EU during 2008-2050 with reductions as soon as technically possible. It is estimated that from the now living persons alive are 70% in the year 2050.

Emission reduction means development and implementation of new energy technology solutions. European Union climate chief is Connie Hedegaard since 10 February 2010. Effects[edit] Climate change affects both people and the environment in the world as well as in Europe. Observed impacts[edit] In the absence of climate change, extreme heat waves in Europe would be expected to occur only once every several hundred years. 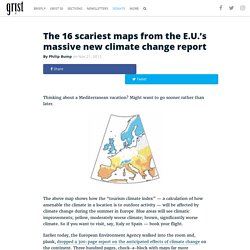 Might want to go sooner rather than later. The above map shows how the “tourism climate index” — a calculation of how amenable the climate in a location is to outdoor activity — will be affected by climate change during the summer in Europe. Blue areas will see climatic improvements; yellow, moderately worse climate; brown, significantly worse climate. So if you want to visit, say, Italy or Spain — book your flight. Earlier today, the European Environment Agency walked into the room and, plunk, dropped a 300-page report on the anticipated effects of climate change on the continent.

Here are some of the more alarming maps and graphs, because terror is a dish best shared. Temperatures We’ll start with the big one. As the report notes: “The five warmest summers in Europe in the last 500 years all occurred in the recent decade (2002–2011).”