Migrants GoPro trying to sneak into the UK via Calais. Banksy-has-created-a-graffiti-version-of-steve-jobs-outside-calais-refugee-camp-711140. This is the latest work from street artist Banksy, who has taken on the migrant crisis in a new mural at a refugee camp in France. 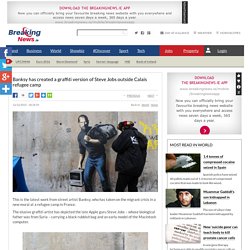 The elusive graffiti artist has depicted the late Apple guru Steve Jobs – whose biological father was from Syria – carrying a black rubbish bag and an early model of the Macintosh computer. Jobs was adopted. His biographer, Walter Isaacson, has described the computer genius’s biological father, Abdulfattah Jandali, as a graduate student who came from a prominent family and studied in the US. Migrant life in Calais' Jungle refugee camp - a photo essay. The boys who could see England.

Part 1: On dry land A gale was blowing from the south-west as the elderly architect put on his jacket and rubber boots and went outside. 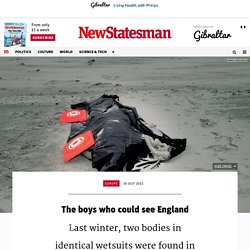 Down in the bay, four-metre-high waves crashed against the cliffs and sent spray hundreds of metres across the grazing land at Lista, on Norway’s southernmost tip. DM Aerial photographs of Calais migrant camp. The Jungle, Calais: Good Chance Theatre Dome. This is my blog of our experience of delivering and setting up our geodesic dome in the jungle, meeting some amazing people and throwing a massive launch party for Good Chance Calais, where all the different nationalities in the camp danced to each other's music; a first for this camp as we were told. 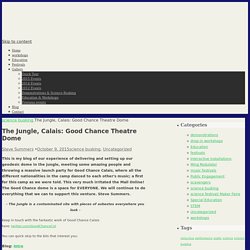 This very much irritated the Mail Online! The Good Chance dome is a space for EVERYONE. We will continue to do everything that we can to support this venture. Steve Summers. Why I donated my bike to people at Calais refugee camp. Critical Mass is not a conventionally political movement. 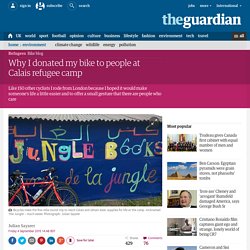 In cities around the world, the monthly bicycle event sees cyclists – from London to New York and Sydney – convene in a regular place, on the last Friday of the month, and ride the streets of their city in the safety and camaraderie of a group. With its mildly anarchic origins in the idea that cities should be designed around human beings rather than motor vehicles, and that those human beings have a right to free movement on the roads of their cities, perhaps I should not have been so surprised to learn London’s August ride would see bicycles taken from the capital to Calais, where they would be donated to people at the refugee camp known as the Jungle. 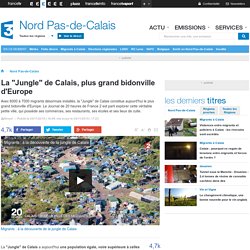 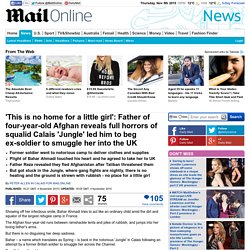 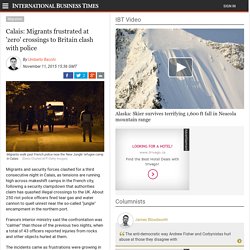 About 250 riot police officers fired tear gas and water cannon to quell unrest near the so-called "jungle" encampment in the northern port. France's interior ministry said the confrontation was "calmer" than those of the previous two nights, when a total of 43 officers reported injuries from rocks and other objects hurled at them. The incidents came as frustrations were growing in the camps, currently housing a record 6,000 people, as tightened controls on access to the port and Eurotunnel have made it significantly harder for migrants to cross to Britain.

"Since 21 October ... no migrant has crossed to Britain," she told La Voix du Nord newspaper. "The message we want to convey to migrants is: you must reflect on your path. " Salam. Resisting the border regime since 2009 *** ألشعب يريد إسقاط الحدود. Inside the Jungle: Calais's refugee camp. Comments (0) The Cornishman reporter Hazel Murray recounts her venture into Calais's refugee camp this weekend; LEAVING the ferry after arriving at Calais on Sunday night, I thought about what the next 24 hours would have in store as we snaked our way through the port and reached our hostel, due to venture to one of the largest refugee camps in the Western world the following morning. 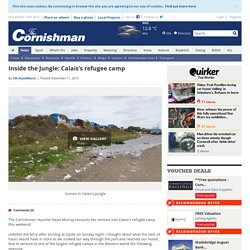 On arrival, the town of Calais almost seemed bereft of local people, let alone refugees, and I couldn't begin to picture what the camp, known as The Jungle, was like. Our hostel was full of volunteers determined to make a difference, beaming with an infectious, almost party-like attitude. If they hadn't told me of the long hours spent in the warehouse or distributing aid to the desperate people of The Jungle, I may have mistaken them for care-free travellers, rather than the likes of paramedics, architects and nurses, putting aside their comfortable lives to help those in need. Watch our video here: Régions - Nord - Picardie. La new jungle vue du ciel : un autre regard sur les migrants de Calais. Vue aérienne de la new jungle Coincés entre la Manche, l'autoroute A16 et le port industriel de Calais, entre 5000 et 6000 migrants vivent dans des conditions précaires sur une ancienne décharge à la limite de la commune de Marck. 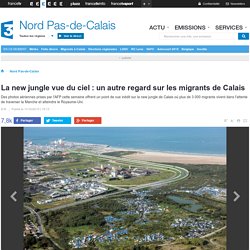