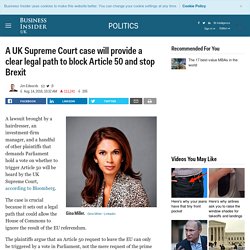 Gina Miller / Linkedin A lawsuit brought by a hairdresser, an investment-firm manager, and a handful of other plaintiffs that demands Parliament hold a vote on whether to trigger Article 50 will be heard by the UK Supreme Court, according to Bloomberg. Businessinsider. People are really, really hoping this theory about David Cameron and Brexit is true. As the dust settles on the EU referendum battleground, some 33 million voters await with bated breath to see what the victors will do now that the nation has spoken to leave. 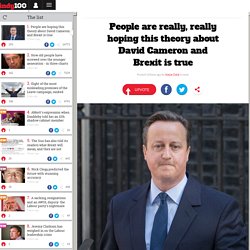 Political commentators forecast a dark future for the UK: Jeremy Corbyn has just sacked Hilary Benn to head off a coup, and Boris Johnson could be prime minister come November. David Cameron’s decision to resign before enacting Article 50 of the Lisbon Treaty, which sets out how a country could leave the EU, may have much bigger implications for Conservative hopefuls eyeing up the Prime Minister's seat than they bargained for. While panic ensues, one person’s musings in the comments section of the Guardian has an interesting hypothesis on these complications: If Boris Johnson looked downbeat yesterday, that is because he realises that he has lost.

The comment, which was picked up on Twitter, has been shared thousands of times. If true, that is some parting gift. More: The biggest Brexit irony, nailed in 140 characters. Parliamentary fightback against Brexit on cards. The prospect of a parliamentary fightback against the result of the EU referendum gathered pace on Sunday, with pro-remain figures saying they would not “roll over and give up”. 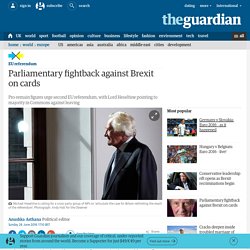 Some are urging a second referendum after Brexit negotiations have taken place. Lord Heseltine has pointed to the practicalities of an overwhelming majority in the House of Commons against leaving the EU. “There is a majority of something like 350 in the House of Commons broadly in favour of the European relationship,” he said. “There is no way you are going to get those people to say black is white and change their minds unless a) they know what the deal is and b) it has been supported either by an election or by another referendum,” Heseltine told Sky News. #Bregret: Could petition trigger a SECOND referendum on EU? Brexit: Man who set up petition for second EU referendum is LEAVE campaigner from the Midlands.

The creator of a petition calling for a second EU referendum that has attracted more than three million supporters is a Brexit activist from the Midlands. 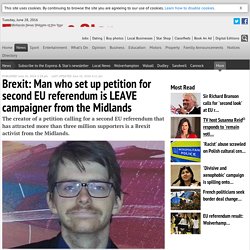 Oliver Healey, who lives in Wellington, Telford, set up the online petition over a month ago, when he expected most people to vote for Britain to stay in the European Union. The petition states: "We the undersigned call upon HM Government to implement a rule that if the Remain or Leave vote is less than 60 per cent based on a turnout less than 75 per cent there should be another referendum. " Now he is accusing Remain campaigners of hijacking it. In a statement posted on Facebook Mr Healey said: His full statement reads: "This petition was created at a time (over a month ago) when it was looking unlikely that 'leave' were going to win, with the intention of making it harder for 'remain' to further shackle us to the EU.

"I am it's creator, nothing more. The petition prompted scientist and broadcaster Professor Brian Cox to tweet: How to stop Brexit: get your MP to vote it down. It’s not over yet. 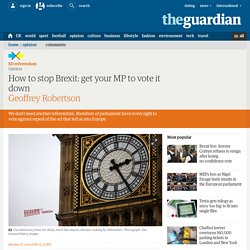 A law that passed last year to set up the EU referendum said nothing about the result being binding or having any legal force. “Sovereignty” – a much misunderstood word in the campaign – resides in Britain with the “Queen in parliament”, that is with MPs alone who can make or break laws and peers who can block them. Before Brexit can be triggered, parliament must repeal the 1972 European Communities Act by which it voted to take us into the European Union – and MPs have every right, and indeed a duty if they think it best for Britain, to vote to stay. Brexit? Maybe not, after all. FierEuropeen This is so dangerous and utterly undemocratic. 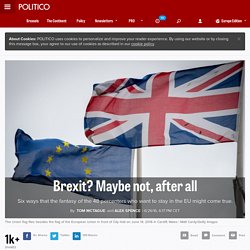 We are talking about the UK or of Nigeria?!? The brexiters won fairly by a very good margin and by an enormous pool volume, but it seems that the British government is stealthily under the desk preparing to do a 2º referendum or even quite simple disregard the brexiters winning as it was never happened. Brexit: Will there be a general election next year? I do not believe that Brexit will happen. All good dramas involve the suspension of disbelief. 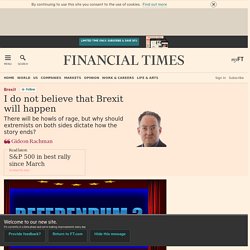 So it was with Brexit. I went to bed at 4am on Friday depressed that Britain had voted to leave the EU. The following day my gloom only deepened. But then, belatedly, I realised that I have seen this film before. I know how it ends. Brexit won't happen in the end – here's why. Even for an optimistic Brexiteer like me, the last few days have been difficult. 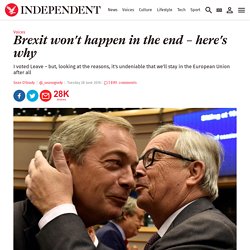 Many people who voted out are already feeling a bit betrayed as certain fundamental truths sink in. The “uncertainty” is already affecting the real economy as we see. Project Fear probably understated some of the dangers, though overstated others absurdly, the latter as former Governor of the Bank of England Mervyn King has said (a calm voice in these frenetic times). Before long this uncertainty will feed through even more concretely from the slightly abstract world of financial markets and exchange rates through to jobs, savings, and, above all, the value of people’s homes, which is where most people’s wealth is stored (especially some of the less well-off voters who opted for “Leave”).

This is really why I suspect Brexit won’t, in the end, come to pass – because most voters can’t afford it in the short run, whatever the longer term advantages. We won't trigger Article 50 until after 2017 – and that means Brexit may never happen at all. It is now eight weeks since we voted to leave the EU but it may be at least eight years before the UK is fully and totally out of Europe – if we finally leave at all. 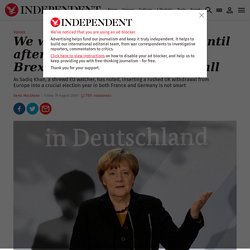 After a post-truth Brexit campaign, now the era of truth is dawning in Downing Street and they are discovering there was never any work completed by the Brexit team on what wthe costs of leaving the EU would be and how precisely it would be done. The new Prime Minister, Theresa May, who is coldly pragmatic, has given the three Musketeers of Brexit – Boris Johnson, Liam Fox and David Davis – the task of getting us out of Europe as painlessly and quickly as possible. They are finding out that their two decades of demagogic condemnation of the EU and all its works is no preparation at all for turning Brexit into reality. Instead, there is the surreal sight of Liam Fox writing a letter saying that half the Foreign Office staff and responsibilities should be placed under his control.