Wimbledon strawberry farmer warns of post-Brexit staff shortage. The owner of the farm that provides Wimbledon with its strawberries has said she hopes there is a mechanism for European citizens to work seasonally in the UK after Brexit. 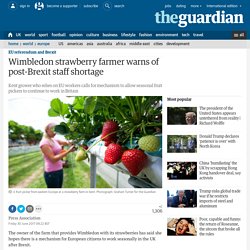 Marion Regan, who owns Hugh Lowe Farms in Kent with her husband Jon, relies on seasonal labour to make sure the tennis championship is supplied with fresh fruit throughout the tournament. The farm sends about 28,000kg (61,700lb) of strawberries to the event each year, most of which is picked by eastern Europeans. Regan said: “In common with lots of other horticultural producers, such as apple growers and salad growers, we all depend on having a really good supply of seasonal labour to help hand-harvest our crops, and we are extremely lucky on this farm to have some fantastic people predominantly from eastern European Union countries who come here for the summer. Brexodus has begun. We EU nationals know staying on is too big a gamble. It will not happen in spectacular ways, so do not expect TV footage of hordes of well-heeled EU nationals making for Heathrow airport or the Channel tunnel. 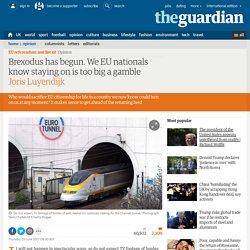 Rather it will be a steady, inexorable drip-feed. It has already started and as the true implications of Brexit sink in the number will swell. Call it the Brexodus: well-educated EU nationals with the global job market at their feet turning their back on a country they had thought of as a good and safe place to make their homes. A Deloitte study, published this week, reveals that nearly half of all highly skilled EU workers could leave the UK within five years. This may have been news to many Britons, but not to the 3 million EU nationals in this country. It is not just that our interests were all but ignored during the referendum campaign last year. Most EU nationals have also become used – even immune – to the English superiority complex vis-a-vis Europe, and to the periodical insults by leading politicians and media figures. 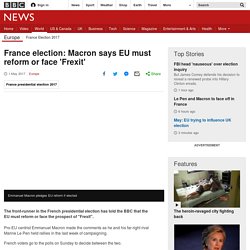 Pro-EU centrist Emmanuel Macron made the comments as he and his far-right rival Marine Le Pen held rallies in the last week of campaigning. French voters go to the polls on Sunday to decide between the two. At a rally in a suburb of Paris, Ms Le Pen has meanwhile accused Mr Macron of being merely more of the same. Ms Le Pen has capitalised on anti-EU feeling, and has promised a referendum on France's membership. France is braced for mass May Day rallies. Please enable Javascript to view our poll of polls chart.

Last updated April 25, 2017 *Polling results up to this date show how people said they would vote on 7 May, if Macron and Le Pen reached the second round. As a psychologist this is what I think led the nation to vote Brexit – and what we can do to heal the wounds it created. With Article 50 triggered today, Trump in the White House and the rise of right wing populism across Europe, many of those who voted Remain are struggling not to fall into despair. 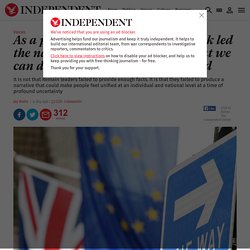 How can we understand this? And what might we do? Psychologists connect despair and hopelessness with a lack of control, a lack of agency. One or two defeats are easy to cope with, but chronic defeats make people give up hope. Consequent feelings of despair can make us retreat into ourselves – they can shut us up and in. After the Brexit vote there was a moment when a space for reflection appeared possible. The attacks and denigration which followed have been highly successful in selling newspapers, despite or actually because of causing ever increasing divisions between the angry and the scared.

The counter argument – that the EU was kind of rubbish, but better than nothing – stood little chance given ambivalence can only be tolerated in a context where individuals feel safe and valued. How Europe will break on Brexit. 'A ludicrous farce': readers on parliament's Brexit debate. British MPs debated government’s Brexit bill on Tuesday, in an initial two-day debate in the House of Commons. 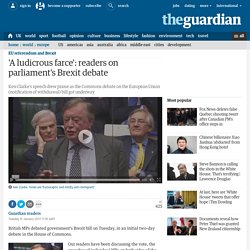 Our readers have been discussing the vote, the speeches of individual MPs on both sides of the debate, and the likely outcome of Wednesday’s vote, which is expected to send the legislation on to its next parliamentary stage. Below, we compile a selection of their comments. Brexit weekly briefing: UK residency fears rise as EU divorce nears. Welcome to the Guardian’s weekly Brexit briefing, a summary of developments as Britain edges towards the EU exit. 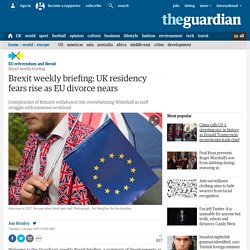 If you’d like to receive it as a weekly email, please sign up here (and check your spam folder if you don’t see it in your inbox). Producing the Guardian’s independent, in-depth journalism takes a lot of time and money. But we do it because we believe our perspective matters – and it might well be your perspective too. If you value our Brexit coverage, become a Guardian Supporter and help make our future more secure. Thank you. The big picture So it’s happy new year, then, and welcome one and all to 2017, the year when Brexit – assuming Theresa May keeps her promise to trigger article 50 by the end of March – finally gets real. It’s already got quite real for some people, of course.

There needs to be something that is very quick, efficient and low cost … There are real people caught up in this. The view from Europe Meanwhile, back in Westminster Westminster, too, was in recess.