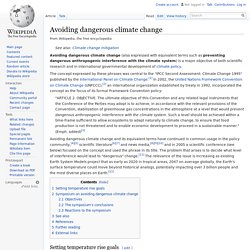 OBJECTIVE. Avoiding dangerous climate change and its equivalent terms have continued in common usage in the policy community,[4][5] scientific literature[6][7] and news media,[8][9][10] and in 2005 a scientific conference (see below) focused on the concept and used the phrase in its title. Setting temperature rise goals[edit] Two degrees: The history of climate changes speed limit - Carbon Brief. Limiting warming to no more than two degrees has become the de facto target for global climate policy. 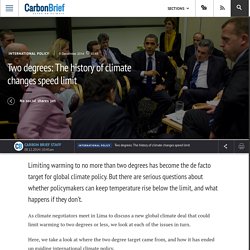 But there are serious questions about whether policymakers can keep temperature rise below the limit, and what happens if they don’t. As climate negotiators meet in Lima to discuss a new global climate deal that could limit warming to two degrees or less, we look at each of the issues in turn. Here, we take a look at where the two degree target came from, and how it has ended up guiding international climate policy.

Two degrees: A selected history of climate change’s speed limit. Credit: Rosamund Pearce for Carbon Brief. A selected history of the two degrees limit. Woven into the fabric of climate policy Perhaps surprisingly, the idea that temperature could be used to guide society’s response to climate change was first proposed by an economist. Global mean temperature change projection from Nordhaus’ 1977 paper. It was a tangential point in the papers. Article 3 of the Kyoto Protocol. Climate change: 7 questions on 2 degrees (Opinion)

Humans never have lived on a planet that's 2 degrees Celsius (3.6 Fahrenheit) warmer than it was before we started burning fossil fuels, in the late 1800s, and climate experts say we risk fundamentally changing life on this planet if we do cross that 2-degree mark. 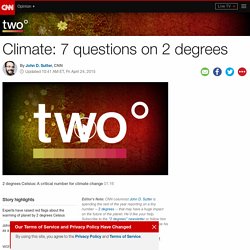 "This is gambling with the planet," said Gernot Wagner, the lead senior economist at the Environmental Defense Fund and co-author of the book "Climate Shock. " Think super droughts, rising seas and mass extinctions. Yet for all of its importance, I don't think the 2-degree threshold is as famous as it should be. I've heard it referred to as the "north star" for climate negotiations. Meaning: This one little number carries huge importance as a way to focus the world's attention. It's so significant that it's going to be the subject of my reporting for the rest of the year. Until 5 p.m. Vote using the Facebook poll below (or go here if you don't see it.) All of those story ideas came from you, by the way. 1. One guy, it turns out. Runaway climate change. The record-breaking decline of Arctic Sea ice has been reported as a "tipping point" Although these terms are rarely used in the peer-reviewed climatological literature,[5][6] that literature does use the similar phrase "runaway greenhouse effect", which refers specifically to climate changes that cause a planetary body's water to boil off. 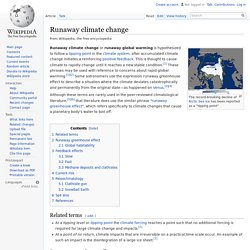 Related terms[edit] Runaway greenhouse effect[edit] The runaway greenhouse effect has several meanings. At the least extreme, this implies global warming sufficient to induce out-of-control amplifying feedbacks, such as ice sheet disintegration and melting of methane hydrates. Conceivable levels of human-made climate forcing could yield the low-end runaway greenhouse. Global habitability[edit] Burning all fossil fuels would adversely affect the ability of humans to live on the planet.