Mandatory use of learning management systems? Event Info Page. D2L raises $85 million but growth claims defy logic. Yesterday D2L announced a second round of investment, this time raising $85 million (a mix of debt and equity) to go with their $80 million round two years ago (see EDUKWEST for a useful roundup of news and article links). 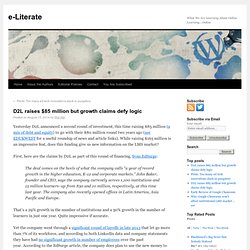 While raising $165 million is an impressive feat, does this funding give us new information on the LMS market? First, here are the claims by D2L as part of this round of financing, from EdSurge: The deal comes on the heels of what the company calls “a year of record growth in the higher education, K-12 and corporate markets.” John Baker, founder and CEO, says the company currently serves 1,100 institutions and 15 million learners–up from 850 and 10 million, respectively, at this time last year.

How was it? The UK’s first Coursera Moocs assessed. No talking heads: students expected lectures to camera, says Siân Bayne Results may vary Sheila MacNeill, Jo Stroud, Shazia Arif and Imogen Bertin were among the 42,000 students who signed up to the course. 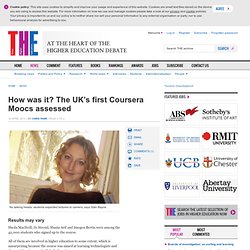 All of them are involved in higher education to some extent, which is unsurprising because the course was aimed at learning technologists and those with an interest in digital education. Of the four, only MacNeill saw the course through to its conclusion, although that does not mean that the others took nothing from the experience. Stroud, a learning technologist at the London School of Economics’ Centre for Learning Technology, was typical of many. “I participated up to week four [of five], but didn’t interact much with other course participants beyond week two,” she notes, citing competing deadlines at work as one reason why her participation tailed off. 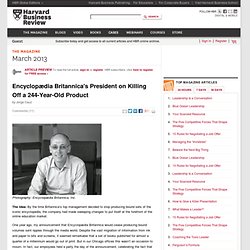 The Idea: By the time Britannica’s top management decided to stop producing bound sets of the iconic encyclopedia, the company had made sweeping changes to put itself at the forefront of the online education market. One year ago, my announcement that Encyclopædia Britannica would cease producing bound volumes sent ripples through the media world. Despite the vast migration of information from ink and paper to bits and screens, it seemed remarkable that a set of books published for almost a quarter of a millennium would go out of print. But in our Chicago offices this wasn’t an occasion to mourn. In fact, our employees held a party the day of the announcement, celebrating the fact that Britannica was still a growing and viable company. We had no need for a wake because we weren’t grieving. The reaction to our announcement was interesting and varied. “NO FUTURE, NO FUTURE, NO FUTURE FOR YOU.” « More or Less Bunk.

“Fifteen years from now more than half of the universities will be in bankruptcy, including the state schools. 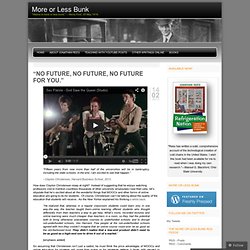 In the end, I am excited to see that happen.”- Clayton Christensen, Harvard Business School, 2013. How does Clayton Christensen sleep at night? Instead of suggesting that he enjoys watching professors (not to mention countless thousands of other university employees) lose their jobs, let’s stipulate that he’s excited about all the wonderful things that MOOCs and other forms of online education are going to do for students.