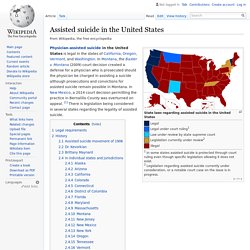 A Brief History of Assisted Suicide. Mention the term "euthanasia," and the first thing most people think of is the epic assisted suicide battle of the 1990s starring Jack "Doctor Death" Kevorkian. 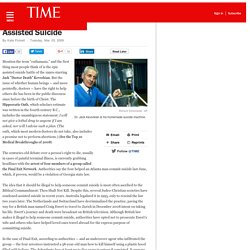 But the issue of whether human beings — and more pointedly, doctors — have the right to help others die has been in the public discourse since before the birth of Christ. The Hippocratic Oath, which scholars estimate was written in the fourth century B.C., includes the unambiguous statement: I will not give a lethal drug to anyone if I am asked, nor will I advise such a plan. See Which States Allow Assisted Suicide. 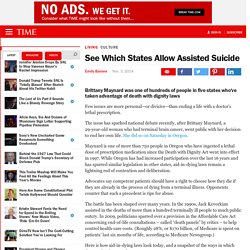 The issue has sparked national debate recently, after Brittany Maynard, a 29-year-old woman who had terminal brain cancer, went public with her decision to end her own life. She did so on Saturday in Oregon. Maynard is one of more than 750 people in Oregon who have ingested a lethal dose of prescription medication since the Death with Dignity Act went into effect in 1997. While Oregon has had increased participation over the last 16 years and has spurred similar legislation in other states, aid-in-dying laws remain a lightning rod of contention and deliberation. Advocates say competent patients should have a right to choose how they die if they are already in the process of dying from a terminal illness. The battle has been shaped over many years. Here is how aid-in-dying laws look today, and a snapshot of the ways in which they are implemented: 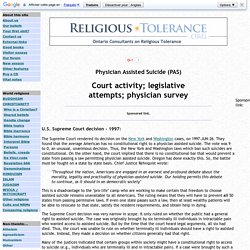 U.S. Supreme Court decision - 1997: The Supreme Court rendered its decision on the New York and Washington cases, on 1997-JUN-26. They found that the average American has no constitutional right to a physician assisted suicide. The vote was 9 to 0, an unusual, unanimous decision. "Throughout the nation, Americans are engaged in an earnest and profound debate about the morality, legality and practicality of physician-assisted suicide. This is a disadvantage to the "pro-life" camp who are working to make certain that freedom to choose assisted suicide remains unavailable to all Americans.

The Supreme Court decision was very narrow in scope. Many of the justices indicated that certain groups within society might have a constitutional right to access to suicide (e.g., individuals who are terminally ill and in intractable pain). Some justices discussed the dual effect theory. Sponsored link: Pain Relief Promotion Act: Physician-Assisted Suicide. How many people choose assisted suicide where it is legal? Today, the House of Lords is debating the Assisted Dying Bill, introduced by Labour peer Lord Falconer. 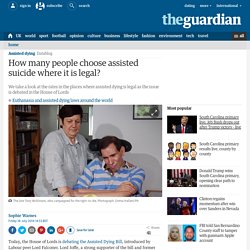 Lord Joffe, a strong supporter of the bill and former human rights lawyer, has estimated that if the Assisted Dying Bill passes, 1,000 people will choose to go through assisted suicides a year – but is this right? The figures were based on Oregon’s statistics involving their Death With Dignity Act, which was passed in 1994. Oregon was the first US state allowing terminally-ill people to end their lives through self-administration of lethal medications. Looking at Oregon’s statistics since 1998, the number of people choosing to use the Act when they are terminally ill has steadily risen over the years. It is also interesting to note that there are far more prescriptions given out than deaths – just over a third of people who initially get prescriptions change their minds or choose to extend their life. That’s a couple of hundred more more than Lord Joffe estimated, but not far off. Americans Support Physician-Assisted Suicide For Terminally Ill. 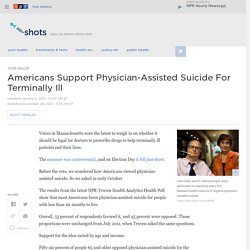 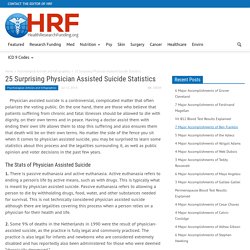 On the one hand, there are those who believe that patients suffering from chronic and fatal illnesses should be allowed to die with dignity, on their own terms and in peace. Having a doctor assist them with ending their own life allows them to stop this suffering and also ensures them that death will be on their own terms.