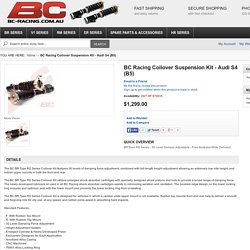 The BC BR Type RS Series Coilover Kit utilizes enlarged shock absorber cartridges with specially designed shock pistons and rods to provide a broad range of damping force. The newly developed lubricant oil used in all BC Racing shock absorber cartridges assists in minimizing aeration and cavitation. The beveled edge design on the lower locking ring ensures and optimum seal with the lower mount and prevents the lower locking ring from unseating.

The BC BR Type RS Series Coilover Kit is designed for vehicles in which a camber plate upper mount is not available. Rubber top mounts front and rear help to deliver a smooth and forgiving ride for city use, at any speed, and rubber joints assist in absorbing hard impacts. Standard Features: ER Series Coilovers. External reservoir ER Series BC Racings premium flagship coilovers are the external reservoir ER Series with separate compression and rebound damping adjustment. 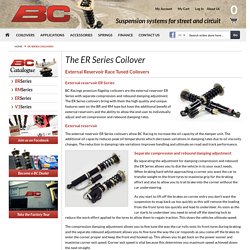 BC Racing North America. Shop By Make - Audi - BC Racing SuperStore by Enjuku Racing Parts, LLC. Shortest front suspension option? - S2Forum - The Audi S2 Community. So i've got a bit of a dilema thats a little bit different to most suspension queries on here! 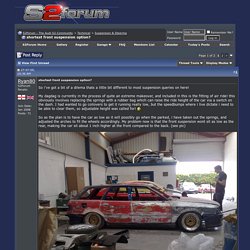 My dagdag is currently in the process of quite an extreme makeover, and included in this is the fitting of air ride! This obviously involves replacing the springs with a rubber bag which can raise the ride height of the car via a switch on the dash. I had wanted to go coilovers to get it running really low, but the speedbumps where i live dictate i need to be able to clear them, so adjustable height was called for!

Extended ball joints for lowered suspension? - S2Forum - The Audi S2 Community. Bored at work, got thinking about my suspension setup. 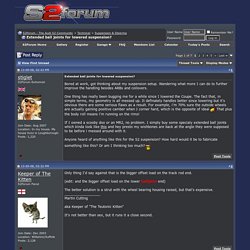 Wandering what more I can do to further improve the handling besides ARBs and coilovers. One thing has really been bugging me for a while since I lowered the Coupe. The fact that, in simple terms, my geometry is all messed up. It definately handles better since lowering but it's obvious there are some serious flaws as a result. Whiteline 14mm Front Camber Adjusting Bolt KCA414 Audi 80 89 89Q 8A B3 8c B4. Centerline Wheels. Ball Joint Extenders xXxtenders Unix. So I installed the BallJoint Xxxtenders kit on my cabriolet last week, have driven about 200miles since and I just wanted to put this out there for those that didn't know Cause I certainly DID NOTI had bought a tie rod flip kit from BFI, with no clue as to the end result of how i will be screwing up my suspension geometry. well in theory it sounded like a great idea so I bought the kitdrilled out one knuckle. during the drilling of the other knuckle the drill BFI had supplied wore out.. thus it wasn't drilling. it ended up breaking. after that whole debacle.

I had the flip kit in the car!! On my way to get alignment the car was steering super weird even going in straight line. i figured it was cause of doing axels, control arms, tie rod ends all that.. well I got alignment and it never really got better. I just chalked it up to a lowered car.After speaking with a few people I was put on to the ball joint extender idea. never hearing of this prior to my problems. Lower Ball Joint Extension's - Page 2.

Ball Joint Extenders. The_natrix wrote: DDG wrote: Kliminati wrote: Cruising thief bay and found these.... ... 20b64a3c66 Seems like they would fit Audi's with 19mm ball joints and they can make 17mm by request. 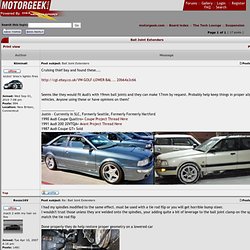 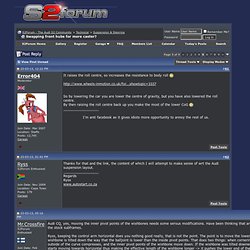 Have been thinking that and it's next to impossible with the stock subframes. Ryss, keeping the control arm horizontal does you nothing good really, that is not the point. Sai and castor design. Ok found it... this is a Billzcat quote from 2005. 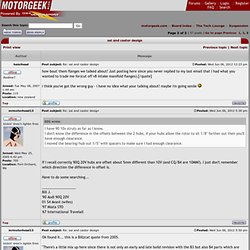 "There's a little mix up here since there is not only an early and late build revision with the B3 but also B4 parts which are similar but not identical to the late B3. Early B3 sedan 8v/10v - stamped steel control arms, 2-bolt ball joints, and the least hub offset of any of the B3/B4 parts. We'll call this the baseline for hub offset. Late B3 sedan 8v/10v - cast/forged control arms, 3-bolt ball joints, same hub offset as early. Early B3 sedan 20v - same as early 10v, but with 5mm additional hub offset (this is entirely in the hub, nothing else) Late B3 sedan 20v - same as late 10v, but again with 5mm additional hub offset. Audi S2 RS2 Suspension. Www.PMWltd.com - Performance Machine Works, LTD Racing Suspension Specialists - Product Catalog. 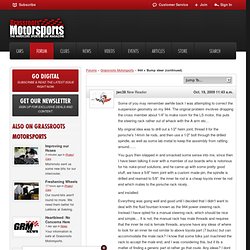 Some of you may remember awhile back I was attempting to correct the suspension geometry on my 944. The original problem involves dropping the cross member about 1/4" to make room for the LS motor, this puts the steering rack rather out of whack with the A arm etc... My original idea was to drill out a 1/2" heim joint, thread it for the porsche's 14mm tie rods, and then use a 1/2" bolt through the drilled spindle, as well as some lab metal to keep the assembly from rattling around.......

You guys then stepped in and smacked some sense into me, since then I have been talking it over with a member of our boards who is notorious for his nuke-proof solutions, and he came up with some pretty good stuff, we have a 5/8" heim joint with a custom made pin, the spindle is drilled and reamed to 5/8". the inner tie rod is a cheap toyota inner tie rod end which mates to the porsche rack nicely. and installed: Oct. 19, 2009 12:42 p.m. I don't know of any bolt on part. Roll Center.....again - Nissan Road Racing Forums. Here's what we're thinking right now - converting the FLCA bushing end to a rod end so we have some length adjustment as well and it will give you around an inch of space to move the mounting point up. 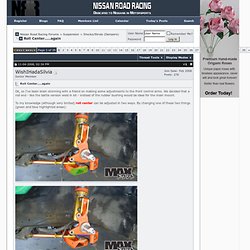