My name is Conchita Davis-Walker. I am a Reading Recovery teacher. I work with first grade and second grade at this time. I have been teacher for 25 years in Pinellas County.

Adolescent and multi literacies. Multiliteracies. EJ1018826 - Putting Multiliteracies into Practice: Digital Storytelling for Multilingual Adolescents in a Summer Program, TESL Canada Journal, 2013. In this article we demonstrate how we created a context in which digital storytelling was designed and implemented to teach multilingual middle school students in the summer program sponsored by a local nonprofit organization, the Latin American Association, in a city in the southeastern United States. 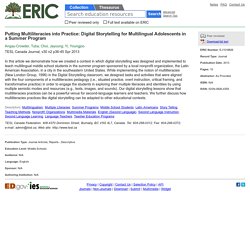 While implementing the notion of multiliteracies (New London Group, 1996) in the Digital Storytelling classroom, we designed tasks and activities that were aligned with the four components of a multiliteracies pedagogy (i.e., situated practice, overt instruction, critical framing, and transformative practice) in order to engage the students in exploring their multiple literacies and identities by using multiple semiotic modes and resources (e.g., texts, images, and sounds). Our digital storytelling lessons show that multiliteracies practices can be a powerful venue for second-language learners and teachers. 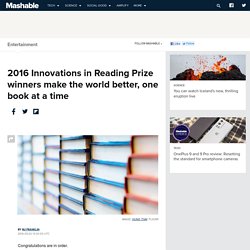 On Monday, the National Book Foundation announced the winner and honorable mentions of the 2016 Innovations in Reading Prize. SEE ALSO: 7 inspiring children's books to motivate your young activist Volume 0% Press shift question mark to access a list of keyboard shortcuts Play/PauseSPACE Increase Volume↑ Decrease Volume↓ Seek Forward→ Seek Backward← Captions On/Offc Fullscreen/Exit Fullscreenf Mute/Unmutem Seek %0-9 No, Mexico isn't actually that orange. Javascript is required to watch this video Founded in 2009, the Innovations in Reading Prize is an annual award that honors social advocates who are making an impact on the world though literature. And now the results for 2016 are in. This year, the winner of the Innovations in Reading Prize is Next Chapter Book Club, a community-based reading program for adolescents and adults with intellectual and developmental disabilities.

Image: Next CHapter Book Club Winner: Next Chapter Book Club Honorable Mentions: Adolescent and Dialect. "I'm is talking right": How the stigma around Black language holds us back from liberation. Instead of teaching Black kids to leave their identity at home, we should be pushing for more teachers who understand them. 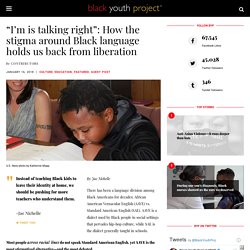 -Jae Nichelle By Jae Nichelle There has been a language division among Black Americans for decades: African American Vernacular English (AAVE) vs. Standard American English (SAE). AAVE is a dialect used by Black people in social settings that pervades hip-hop culture, while SAE is the dialect generally taught in schools. Most people across racial lines do not speak Standard American English, yet AAVE is the most stigmatized alternative—and the most debated.

This division has always been about class. RELATED: Speaking Our Own Language I was raised in a middle class (ish) lifestyle. At the same time, I was teased by my Black peers for “talking white” because I spoke so “properly.” Many people have (historically and presently) considered AAVE to be bad English. At a summer camp for Black youth, I told one of the children I was instructing to sit down and pay attention. As A Black Woman, I Wish I Could Stop Code-Switching. Here’s Why. Shot of two friends talking together in a cafe. 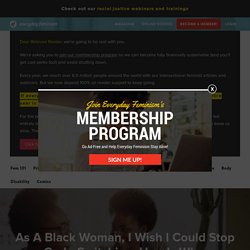 Whenever I call my mother at work, I’m often a little taken aback. She picks up the phone, says hello and asks how she can help me. I know she’s my mom but she doesn’t sound like herself. She sounds like her own twin, one who has perfect intonation and articulation. Until I say “Mom, it’s me.” She’s code-switching. Code-switching is most commonly defined by linguists as “the alternation between two or more languages, dialects, or language registers in the course of” a single conversation or exchange, according to Glottopedia, a website dedicated to linguistics. It is often discussed in reference to bilingual persons. Code-switchers typically do so for several reasons, but it is generally related to our cultures and communities. We code-switch between home and work, or corporate spaces and communal spaces. Take, for example, the recent Sundance film, Sorry to Bother You directed by Boots Riley, staring Atlanta’s Lakeith Smith. 1. 2. 3.