The Guardian on Instagram: “1 of 6 #Cuba photos "View of downtown #Havana. Colorful, dense grid of downtown Havana" Photo: Max Taylor/GuardianWitness You can share your best shots of Cuba using #GuardianWitness #photography #cuba” The problem with the skyscraper wind effect - BBC News. The City of London is promising that high-rise buildings will be monitored to ensure they don't make conditions unbearably windy in surrounding streets. 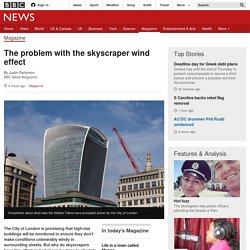 But why do skyscrapers have this effect and what can be done to alleviate it? Anyone who has ever walked near a very tall building in the middle of a city on a windy day will have noticed a strange effect. 'Mumbai is on the verge of imploding' It used to be India’s urban showpiece. 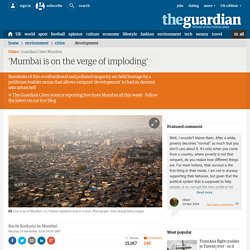 Today, its sceptre and crown have fallen down and, in a phase of cynical destruction masquerading as “development”, Mumbai has become a metaphor for urban blight. Consider these statistics. 7 million premature deaths annually linked to air pollution. A tale of four world cities – London, Delhi, Tokyo and Bogotá compared. Cities are not static. 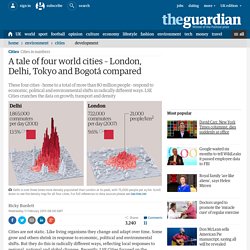 Like living organisms they change and adapt over time. Some grow and others shrink in response to economic, political and environmental shifts. But they do this in radically different ways, reflecting local responses to regional, national and global changes. Africa's First City. When he was 15 years old, David Adeoti worked in an Internet café in blue-collar Satellite Town, where it was almost possible to see the gleaming towers of Lagos Island less than ten miles to the east. 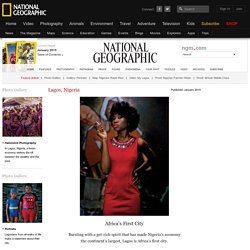 Satellite Town was a step up for Adeoti. His birthplace was off to the north in Orile, a wretched village of flooded streets and collapsing buildings. Technology had provided his way out. London Squared Map. Future Cities Catapult has many programmes that require data analysis. 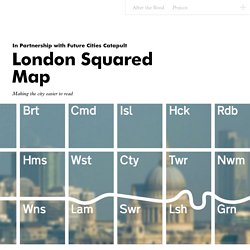 London Squared came out of a partnership between us to develop product ideas that would help them and also help the Future Cities network – anyone working in this field who wanted to create, use, and share data better. Amsterdam City Dashboard: a City as Urban Statistics. An Intriguingly Detailed Animation of How People Move Around a City. Much of what we know about how people move around a metro area – whether they drive to work, where they're going, how many stops they make along the way – comes from travel diaries that sample households periodically fill out. 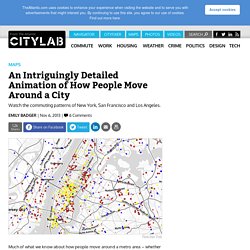 Increasingly, we can supplement this information with meta-data from new sources like social media, cell phones, or electronic transit fare cards. But the old-fashioned household travel survey still does the best job of nailing down the details: whether that traveling dot seen from a Foursquare visualization is on a bus or in a car, if she has a job, how much money her household makes. Travel surveys make it possible to disaggregate commuting patterns by income or age group. To give a sense of what that data looks like – and what kind of patterns emerge from it – UC Berkeley planning Ph.D. student Fletcher Foti animated some of the results of the most recent surveys from the San Francisco Bay Area, Los Angeles, and New York. Bright lights, big cities. AT THE beginning of February, somewhere in London, a maternity ward welcomed the city's 8,615,246th inhabitant. 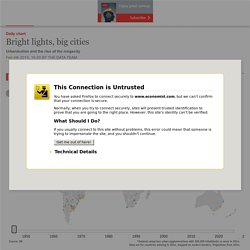 The mayor of London reckons that the British capital has now surpassed its previous population peak set in 1939. Cairo's controversial regeneration: share your stories. China’s Pearl River Delta overtakes Tokyo as world’s largest megacity. China’s Pearl River Delta has overtaken Tokyo to become the world’s largest urban area in both size and population, according to a report from the World Bank. 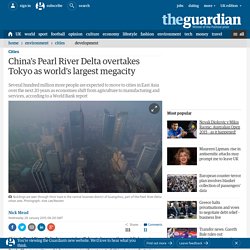 The megacity – which covers a significant part of China’s manufacturing heartland and includes the cities of Shenzhen, Guangzhou, Foshan and Dongguan – is now home to more people than the countries of Canada, Argentina or Australia. Urbanisation which took place over a period of several decades in Europe and North America is happening in just a few years in East Asia, which already contains eight megacities (with populations above 10 million) and 123 cities with between one and 10 million people.

With almost two-thirds of the region’s population (64%) still non-urban at present, several hundred million are expected to move to cities over the next 20 years as economies shift from agriculture to manufacturing and services, according to East Asia’s Changing Urban Landscape: Measuring a Decade of Spatial Growth. Daily chart: The best places to live. Developing World Cities and Population Density.

Without a question, we are living in an urban era. 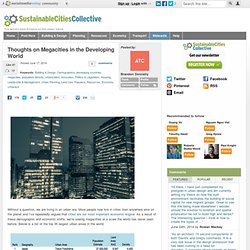 More people now live in cities than anywhere else on the planet and I’ve repeatedly argued that cities are our most important economic engine. Geoffrey West: The surprising math of cities and corporations. Infographic for China’s Urbanisation. Primate Cities: Mexico City. Real-life Atlantis? The world's megacities that are sinking 10 times faster than water levels are rising - Science - News.

Six ways city landscapes can be more flood resilient - in pictures. Smartest cities in the world revealed – as well as what the rest of us can learn from them - World - News - The Independent. The list is announced each year by the Intelligent Community Forum (ICF), a New York-based thinktank that studies economic and social development, with former winners including Glasgow and Stockholm. 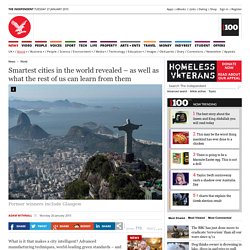 After its success hosting the 2014 World Cup and winning the right to host the 2016 Olympics, Rio de Janeiro is the most well-known city on the list, cited for its attempts to “revitalise itself” including better transportation systems and new solutions to infrastructure problems. But there are minnows named among the smartest communities in the world as well, including rural Mitchell, South Dakota. The US town was praised by the thinktank for an urban plan called “Vision 2000” which, developed in the late 1980s, has resulted in a state-of-the-art healthcare system, leading university and schools and a boom for software and engineering companies.

The ICF said it “demonstrates the hope that broadband and new ideas in planning offer to rural communities and towns”. Loading gallery. Susdrain - The community for sustainable drainage. The 10 Most Livable Global Cities For Balancing Work And Play. How do the world’s biggest cities stack up against each other in terms of their livability?

Every day seems to bring a different sort of ranking, and comparing the different rankings can end up highlighting more about the rankings themselves than any given city on them. A new study, published in the World Review of Science, Technology, and Sustainable Development, tries to make sense of where seven different global city livability rankings overlap and why. Among the seven, it also examines its own new index, which unsurprisingly, it evaluates as the most "balanced" of the group. The Age of Megacities. The Economist sur Twitter : "India's cities are more polluted than China's. The evolution of London: the city's near-2,000 year history mapped.

The Speed Burden [Costs of Sprawl Series] This Chart Tool Shows How City Centers Are Doing Better Than Inner Suburbs. A new study published by the Demographics Research Group of the University of Virginia’s Weldon Cooper Center for Public Service analyzes the demographic trends of 66 major U.S. metros, measuring how they change with distance from the city center. The report's charting tool helps visualize the data on an "objective, intuitive spatial scale" rather than on subjective "urban"/"suburban" categories, says Luke Juday, the author of the report. The new tool will provide endless fun for chart-loving city wonks, but for now we're focused on two key insights. UK-AIR, air quality information resource - Defra, UK. Urban heat waves getting worse, study confirms. PARIS – Urban heat waves have become more frequent over the past 40 years, scientists reported on Jan. 30. Urbanization in the developing world - Architect This City by Brandon G. Donnelly.

What Dhaka, Bangladesh, the Traffic Capital of the World, Can Teach Us. What does this town have to do to become a “world city”? People love ranking stuff. World's cities experiencing more heatwaves, study shows.