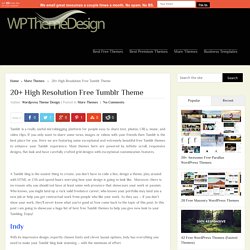 If you only want to share some news, images or videos with your friends then Tumblr is the best place for you. Here we are featuring some exceptional and extremely beautiful free Tumblr themes to enhance your Tumblr experience. Most themes here are powered by infinite scroll, responsive designs, flat look and have carefully crafted grid designs with exceptional customization features. A Tumblr blog is the easiest thing to create, you don’t have to code a line, design a theme, play around with HTML or CSS and spend hours worrying how your design is going to look like. Moreover, there is no reason why you should not have at least some web presence that showcases your work or passion. Indy With its impressive design, expertly chosen fonts and clever layout options, Indy has everything you need to make your Tumblr blog look stunning – with the minimum of effort. 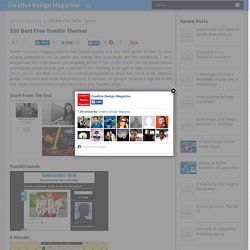 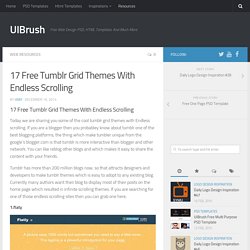 If you are a blogger then you probabley know about tumblr one of the best blogging platforms, the thing which make tumbler unique from the google’s blogger.com is that tumblr is more interactive than blogger and other network. You can like reblog other blogs and which makes it easy to share the content with your friends. Tumblr has more than 200 million blogs now, so that attracts designers and developers to make tumblr themes which is easy to adopt to any existing blog. Currently many authors want their blog to display most of their posts on the home page which resulted in infinite scrolling themes. 1.flaty Download 2.Aspartam Download 3.Candy Download. 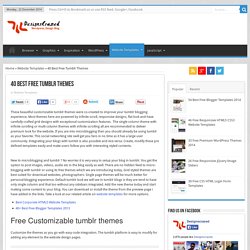 Most themes here are powered by infinite scroll, responsive designs, flat look and have carefully crafted grid designs with exceptional customization features. The single column theme with infinite scrolling or multi column themes with infinite scrolling all are recommended to deliver premium look for the website. If you are into microblogging then you should already be using tumblr as your favorite. This social networking site swill get you fans in no time as it has a large user community. 30 Beautiful Free Tumblr Themes 2014. Setup your online presence quickly and beautifully with free tumblr themes. 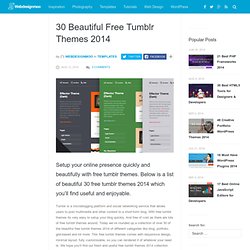 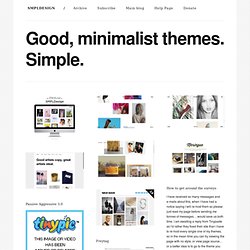 Passive Aggressive 2.0 There are options to have a circular portrait instead of your title, endless scroll or jump pagination, and colour options. Inspired by Designspiration. Sleep Wave 2.0 Options you can toggle include big or small photos, captions/tags on the index page, “faded” look on image when you hover, choice of colours for the title hover and underline colour on links and font of the body (no choice on title/navigation font though, sorry!) Let me know if there are any problems with it by sending me a message on my main blog but, as usual, I don’t answer customization inquiries! Theme Guide - Best free Tumblr themes curated. Showcase of Best Minimal Portfolio Tumblr Themes. Tumblr has grown and grown since it’s early days by offering a micro-blogging platform, rather than competing directly with other blog networks. 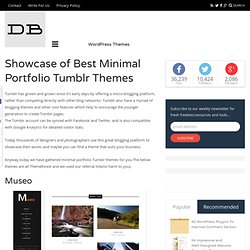 Tumblr also have a myriad of blogging themes and other cool features which help to encourage the younger generation to create Tumblr pages. The Tumblr account can be synced with Facebook and Twitter, and is also compatible with Google Analytics for detailed visitor stats. Today thousands of designers and photographers use this great blogging platform to showcase their works and maybe you can find a theme that suits your business. Anyway,today we have gathered minimal portfolio Tumblr themes for you.The below themes are all Themeforest and we used our referral link(no harm to you). Museo Empire. Ashley. Your tiny type is hard to read – no, not hard to read, impossible to read. 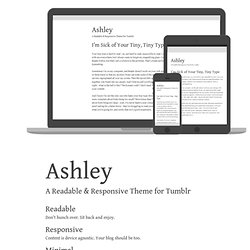 I carry my phone with me everywhere, but I always seem to forget my magnifying glass. I tap the Safari Reader button, but that’s not a solution to the problem. That’s a band-aid for your bad typesetting. Sometimes I’m on my computer, and Reader doesn’t work on your web app. I hit CMD + two or three times so that my dyslexic brain can make sense of the musty 14px Helvetica your servers regurgitated all over my screen. And I know I’m not the only one who hates your tiny type. Has A Portfolio. Untitled Themes - Themes for Tumblr. Kinley Theme by UT. Derp.