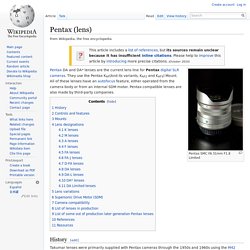 They use the Pentax KAF(And its variants, KAF2 and KAF3) Mount. All of these lenses have an autofocus feature, either operated from the camera body or from an internal SDM motor. Recommended Pentax Gear 2014 - Gear Guides. Recommended Pentax Gear 2014 Some of the best Pentax equipment currently available By PF Staff in Gear Guides on Jan 9, 2014 Our writers and editors have handled every Pentax DSLR ever made as well as virtually every lens and peripheral currently available for Pentax cameras. 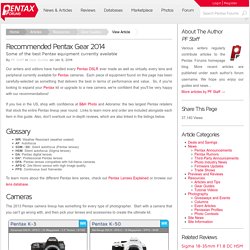 Each piece of equipment found on this page has been carefully-selected as something that delivers the best in terms of performance and value. So, if you're looking to expand your Pentax kit or upgrade to a new camera, we're confident that you'll be very happy with our recommendations! If you live in the US, shop with confidence at B&H Photo and Adorama: the two largest Pentax retailers that stock the entire Pentax lineup year round. Glossary. Pentax K-Mount Lenses Explained: The differences between various Pentax lens series. The current generation of lenses for APS-C Digital SLRs Autofocus No aperture ring Automatic aperture setting is available Image format: APS-C sensor format (18 x 24mm) Suited for DSLRs with APS-C sized sensor Sub-categories: DA* (professional), DA Limited (high-end pancake) and DA L (budget kit) Introduced in 2004 In production The smc PENTAX-DA, smc PENTAX-DA L, and smc PENTAX-DA* lenses are designed to be used exclusively on digital cameras with an APS C sized sensor (the K and *ist D digital camera series). 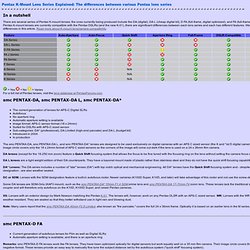 Their image circle covers only the 18 x 24mm format of APS C sized sensors so the corners of the image will come out dark if the lens is used on a 24 x 36mm film camera. DA lenses (except for the 18-250 mm zoom) feature a Quick Shift focusing system that allows the focus to be fine tuned with the focusing ring on the lens without setting the camera focus selector to "MF". DA L lenses are a light weight edition of their DA counterparts. Early Pentax Takumar Lenses. In the early 1950's it was a matter of prestige for a leading camera company to have its own fast telephoto/ portrait lens. 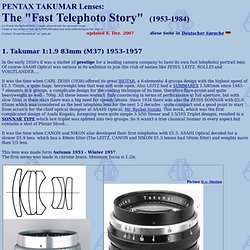 Of course ASAHI Optical was serious in its ambition to join this club of names like ZEISS, LEITZ, ROLLEI and VOIGTLANDER.... It was the time when CARL ZEISS (1938) offered its great BIOTAR, a 6-elements/ 4-groups design with the highest speed of f/1.5 75mm, a quite huge, hevyweight lens that was soft wide open. Also LEITZ had a SUMMAREX 1.5/85mm since 1943 - 7 elements in 6 groups, a complicate design for the coating technique of its time, therefore flare-prone and quite heavyweight as well - 700g.

All these lenses weren't fully convincing in terms of performance at full aperture, but with slow films in these days there was a big need for speedy lenses. It was the time when CANON and NIKON also developed their first telephotos with f/1.5. Compatibilite-en. Equipment recommendation - Which prime lens for Pentax? - Photography Stack Exchange. Welcome to Bojidar Dimitrov's Pentax K-Mount Page. Early Pentax Takumar Lenses. Early PENTAX TAKUMAR Lenses (c) Frank Mechelhoff 2005 - Copies allowed only for personal usage Usage of my pictures only up to 500x300 pixel and with referencing to the source Contact: taunusreiter "at" yahoo.de Update 2. 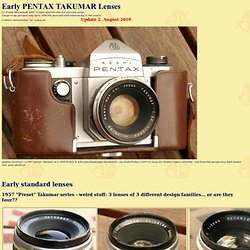 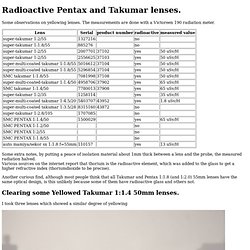 The measurements are done with a Victoreen 190 radiation meter. Some extra notes, by putting a peace of isolation material about 1mm thick between a lens and the probe, the measured radiation halved. Various sources on the internet report that thorium is the radioactive element, which was added to the glass to get a higher refractive index (thoriumdioxide to be precise). Another curious find, although most people think that all Takumar and Pentax 1:1.8 (and 1:2.0) 55mm lenses have the same optical design, is this unlikely because some of them have radioactive glass and others not. Clearing some Yellowed Takumar 1:1.4 50mm lenses. I took three lenses which showed a similar degree of yellowing Two of them got the blacklight treatment, the other one was my reference yellow lens.

And after a week: A closer look at the 'hot' Takumar 1:1.4/50mm. So, this element did clear. And consequently, half of it cleared. So, what did I learn with these tests. Compatibilite-en. Is there a definitive guide to Pentex Lenses. The Pentax Camera Lens Compatibility Chart. Prairie Rim Images: Old glass: Asahi/Pentax SMC & Super-Takumar 50/1.4. Many of you know that I like old things, and that includes camera lenses. 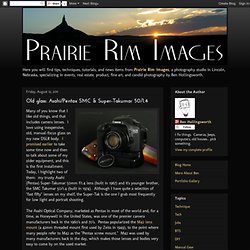 I love using inexpensive, old, manual-focus glass on my new DSLR body. I promised earlier to take some time now and then to talk about some of my older equipment, and this is the first installment. Today, I highlight two of them: my trusty Asahi (Pentax) Super-Takumar 50mm f/1.4 lens (built in 1967) and it's younger brother, the SMC Takumar 50/1.4 (built in 1974). Although I have quite a selection of "fast fifty" lenses on my shelf, the Super-Tak is the one I grab most frequently for low light and portrait shooting. The Asahi Optical Company, marketed as Pentax in most of the world and, for a time, as Honeywell in the United States, was one of the premier camera manufacturers back in the 1960's and 70's.

So, about this lens. Shooting manual lenses on Pentax DSLRs « robertsdonovan.com. One of the best things about shooting a modern Pentax DSLR is having access to 35 years worth of wonderful K mount lenses- all with shake reduction! 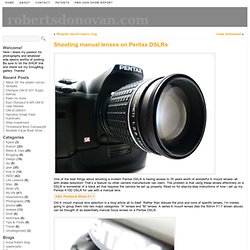 That’s a feature no other camera manufacturer can claim. The problem is that using these lenses effectively on a DSLR is somewhat of a black art that requires the camera be set up properly. Read on for step-by-step instructions of how I set up my Pentax K10D DSLR for use with a manual lens. Old K mount manual lens selection is a blog article all to itself. Rather than discuss the pros and cons of specific lenses, I’m merely going to group them into two major categories: “A” lenses and “M” lenses. Genuine Pentax Screwmount Lens Adapter. Mounting Pentax M42 Screw Mount Lenses on Pentax K Bayonet Cameras (Written By Ole Oest) Pentax provides an M42-Screwmount adapter for K-mount bayonet cameras that allows you to mount any Takumar lens on a regular bayonet body. 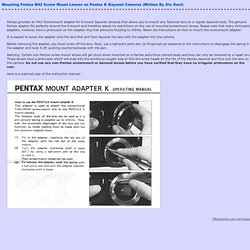 The genuine Pentax adapter fits perfectly around the K-mount and therefore places no restrictions on the use of mounted screwmount lenses. Please note that many third-party adapters, however, have a protrusion on the adapter ring that prevents focusing to infinity. Below are instructions on how to mount the screwmount adapter: It is easiest to screw the adapter onto the lens first and then bayonet the lens with the adapter into the camera.

Before removing the adapter, you must screw off the lens. How to use/meter Manual & M42 Lenses on all Pentax DSLRs (K-5, K-r, K-x, K-7...) Pentax K-Mount Lenses Explained: The differences between various Pentax lens series. Third-Party Lenses for Pentax - Pentax Lens Review Database.