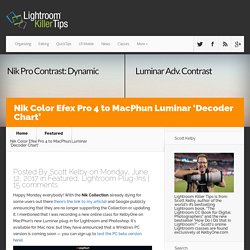 With the Nik Collection already dying for some users out there (here’s the link to my article) and Google publicly announcing that they are no longer supporting the Collection or updating it, I mentioned that I was recording a new online class for KelbyOne on MacPhun’s new Luminar plug-in for Lightroom and Photoshop. It’s available for Mac now, but they have announced that a Windows PC version is coming soon — you can sign up to test the PC beta version here). While Luminar it doesn’t replace everything the Nik Collection does, it does a pretty awesome job of covering the special effects plug-in I used the most by far — Nik Color Efex Pro 4. That is one awesome plug-in, and I hate to see it die on the vine like this, but at least we have a viable alternative, and one that’s pretty cheap (It’s $69, and if you’re a KelbyOne member you get 15% off of that).

Google Play. The Top Five Nik Color Efex Pro Filters For Superb Landscape Photos. The Nik Collection by Google carries some of the most powerful image editing applications for photographers. 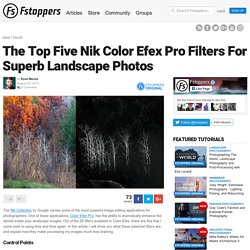 One of these applications, Color Efex Pro, has the ability to dramatically enhance the stories inside your landscape images. Out of the 55 filters available in Color Efex, there are five that I come back to using time and time again. In this article, I will show you what these essential filters are and explain how they make processing my images much less draining. 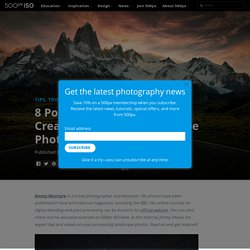 His photos have been published in local and national magazines, including the BBC. His online courses on digital blending and post-processing can be found in his official website. You can also check out his exclusive tutorials on 500px ISO here. In this tutorial, Jimmy shares his expert tips and videos on post-processing landscape photos. 49 Nik Collection Presets and Recipes to Help You Create Amazing Photos.

Product Description Use the presets to give your photos a unique new look or to bring some magic to the parts of your photo that you want to have some extra ‘pop’. 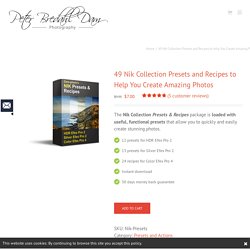 Nik Color Efex Pro 4 Recipes – examples Preview of a few of the presets that you get with the Nik Presets & Recipes Package. Presets and Recipes - Nik Collection Help. When reinstalling the software or installing the software to a new computer, it may be necessary to export custom presets and recipes that you have created or imported in order to save them and import them again later. 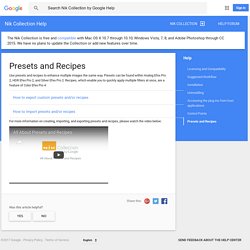 This is also how you would share your presets or recipes with friends and colleagues. To export presets and recipes, please do the following: Open an image into the desired plug-in. Access the recipe you would like to export. (Note: This will only work for the presets and recipes that you have created or imported. Getting to Know Analog Efex Pro from the Google Nik Collection. Google's Nik Collection has expanded its suite of plugins while paying homage to its analog past with the release of Analog Efex Pro. 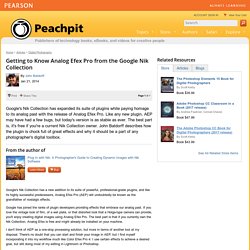 Like any new plugin, AEP may have had a few bugs, but today's version is as stable as ever. The best part is, it's free if you're a current Nik Collection owner. John Batdorff describes how the plugin is chock full of great effects and why it should be a part of any photographer's digital toolbox. From the author of  Google's Nik Collection has a new addition to its suite of powerful, professional-grade plugins, and like its highly successful predecessors, Analog Efex Pro (AEP) will undoubtedly be known as the grandfather of nostalgic effects. Google has joined the ranks of plugin developers providing effects that embrace our analog past. I don't think of AEP as a one-stop processing solution, but more in terms of another tool at my disposal. 8 Post-Processing Tips For Creating Beautiful Landscape Photos.

Jimmy Mcintyre is a travel photographer and educator. 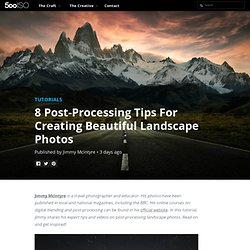 His photos have been published in local and national magazines, including the BBC. Skin Tone and Glow color efex. Silver Efex Zones. Vintage Color efex. 3 Step Sharpening Workflow Using Nik Collection for Optimal Sharpness. Graduated filters can go up as well as down! - Life after Photoshop. Here’s a technique I use quite often to add a little extra drama and contrast to a scene. 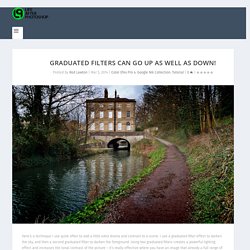 Processing an Image: From Start to Finish. This chapter is from the book  You’ve spent most of this chapter dissecting all the great tools SEP has to offer. 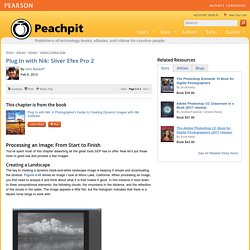 Now let’s put those tools to good use and process a few images. Creating a Landscape Although the current tonal range is good, it would be better if the final image had a high amount of contrast as well as increased texture. The goal is to make the clouds appear almost three-dimensional by darkening the sky and adding texture to the clouds. Darken the sky Dynamic clouds Next, head to Selective Adjustments and add control points to the clouds. Free Analog Efex Pro presets - Life after Photoshop. Welcome to the fourth and final part of this mini-series on Google’s brand new film and camera simulation plug-in, Analog Efex Pro. 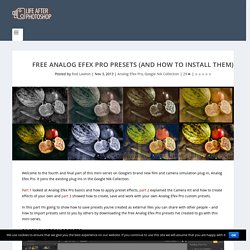 To export my presets for sharing with other people, I need to press the Export All button (circled) at the bottom of the custom presets panel. 02 Export location. Skin Tone and Glow color efex. Silver Efex Zones. Vintage Color efex. Viveza. 3 Step Sharpening Workflow Using Nik Collection for Optimal Sharpness. Photoshop Dodge and Burn with Nik Color Efex Pro - Page 2 of 3 - CreativePro.com. The Really Good Stuff Color Efex Pro would almost be worth the price just for its contrast filters. But Nik Multimedia has also thrown in a few truly amazing filters that you might find yourself growing somewhat dependent on.

First off is the Polarizer filter. Amazingly, it mimics the effect of a circular polarizing filter on a lens. Providing two sliders, one for rotation and one for intensity, the Polarizer can be used to improve contrast and color in skies and is a great way to produce more dramatic clouds and more deeply colored blues. You cannot, however, remove reflections and glare with the Polarizing filter as you would with a real polarizer. Original image. Applying a mild polarizing effect improves contrast. The Sunshine filter is the most technically amazing tool in the Color Efex Pro package, and it’s pretty useful to boot. The Sunshine filter adjusts images to make the look as though they were shot under sunny skies, as with this photo. Tags. Photoshop Dodge and Burn with Nik Color Efex Pro - CreativePro.com.

Nik Multimedia has a somewhat curious product line. Sharpener Pro and Color Efex Pro, its two collections of plug-ins for Adobe Photoshop, offer many features and capabilities that are already built-in to most image editors. So why in the world would you ever spend $299.95 for a package like Color Efex Pro? 8 Post-Processing Tips For Creating Beautiful Landscape Photos. Linkedin. About this video Join Tim Grey for an in-depth discussion in this video Bokeh effects, part of Learning Analog Efex Pro. Released Analog Efex Pro, part of the Nik Collection from Google, is focused on adding various film and wet plate effects, enabling you to import a sense of age and a unique look to any digital photo. In this course you'll learn all about the many creative effects you can apply in Analog Efex Pro, such as lens distortion, vignettes, bokeh, and imitated dust and scratches. Skill Level Intermediate 1h 5m Duration Views Show More Show Less View courses offline with a Premium Membership.

Skin Tone and Glow color efex. Silver Efex Zones. Vintage Color efex. Viveza. Color Efex Pro 4 – Filters, Presets, and Recipes, Part 3 of 3 – KelbyOne. Lesson 7: Color Efex Pro 4 – Filters, Presets, and Recipes, Part 3 of 3 with Scott Kelby Duration: 1 hour 58 minutes About Course. Sharpening. How Digital Image Sharpening Works, and Why You Should Use It. Image sharpening might just be the most underutilized digital photography trick this side of studying the histogram. Read on as we explain what image sharpening is, why we need it, what it does, and why you should be liberally applying it to your own images to banish fuzzy edges and make your images pop. Why Exactly Are Images Fuzzy in the First Place? Before we dig into how to sharpen your images it is important to understand exactly why digital images even require sharpening in the first place. Digital images, both those created in a digital camera and by scanning images to create digital copies of analog works, suffer from limitations imposed by the digital device’s sensor.

Nik Multimedia has a somewhat curious product line. How and When to Convert to Black and White. The Best Kept Secret in Photoshop: Layer Masks. Google Play. Adobe Photoshop 2015.5 – new Plugin Location. This week Adobe launched a full new version of Photoshop. As always this comes with lots of work for us end users. Mostly with reinstalling plugins. But the good news is this may be the last time we have to worry about that. According to this article The new location is going to be the new Permanent location for plugins and is backward compatible with all CC versions of Photoshop. Few tips for Color Efex Pro – HDRshooter. Tutorial: How to Create Stunning HDR Photos Using NIK's HDR Efex Pro 2 - HDR Guide. There are many ways to produce HDR photos including: through the help of software such as Photomatix, HDR Efex Pro, Oloneo Photo Engine or othersthrough the use of Luminosity Masking through manual blending Of course, out of the aforementioned techniques, the easiest and the fastest way to produce an HDR image is through the use of software.

Plug In with Nik: Silver Efex Pro 2. Home > Articles > Design > Adobe Photoshop This chapter is from the book  As a quick review, I’ll share my favorite tips for efficiently editing great black-and-white images. Anyone have tips/tricks/techniques for Nik Software plugins? : photography.