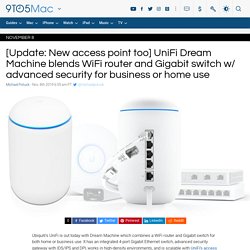 It has an integrated 4-port Gigabit Ethernet switch, advanced security gateway with IDS/IPS and DPI, works in high-density environments, and is scalable with UniFi’s access points to fit almost any size deployment. Update 11/8: After launching Dream Machine earlier this week, UniFi is out with its latest access point, the Beacon HD. 802.11ac Wave 2, 4×4 MU-MIMO technology400+ Mbps performance over a wireless mesh hopHigh Output Power (EIRP): 30 dBm for 5 GHz, 24.8 dBm for 2.4 GHzWorks with UniFi AP or Dream MachineAutomatically discovered for adoption by UniFi Network Controller The Unifi AP Beacon HD is available now priced at $129.

Meanwhile, the company’s previously released AC Lite access points go from around $80 each. UniFi designed the Dream Machine as a versatile router that combines 802.11ac dual-band WiFi and a 4-port Gigabit Ethernet switch. Get Quick Access to Useful Settings With One Switch Menu Bar App for Mac. Advertisement Recent editions of macOS have added some great features, such as Dark Mode and True Tone. 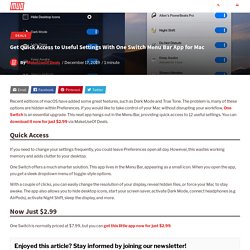 The problem is, many of these options are hidden within Preferences. If you would like to take control of your Mac without disrupting your workflow, One Switch is an essential upgrade. This neat app hangs out in the Menu Bar, providing quick access to 12 useful settings. You can download it now for just $2.99 via MakeUseOf Deals. Quick Access If you need to change your settings frequently, you could leave Preferences open all day. One Switch offers a much smarter solution. With a couple of clicks, you can easily change the resolution of your display, reveal hidden files, or force your Mac to stay awake. Now Just $2.99 One Switch is normally priced at $7.99, but you can get this little app now for just $2.99. Advertisement Recent editions of macOS have added some great features, such as Dark Mode and True Tone.

Switch: Add Second Taskbar To Windows 10. The taskbar in Windows operating system is customizable in many ways. 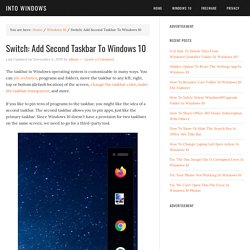 You can pin websites, programs and folders, move the taskbar to any left, right, top or bottom (default location) of the screen, change the taskbar color, make the taskbar transparent, and more. If you like to pin tens of programs to the taskbar, you might like the idea of a second taskbar. The second taskbar allows you to pin apps, just like the primary taskbar. Since Windows 10 doesn’t have a provision for two taskbars on the same screen, we need to go for a third-party tool. Switch is a free program designed to add a second taskbar to Windows 10. The Switch program lets you pin up to 9 programs to its taskbar. All pinned programs to the Switch taskbar can be accessed using the Alt + 1/2/3/4/5/6/7/8/9 keyboard shortcuts.

After installing the Switch, hover the mouse cursor over the Switch taskbar, click on the plus icon on the Switch taskbar to begin adding programs to the Switch taskbar. Juniper broadens SD-Branch management, switch options. Juniper has taken the wraps off new software and switches that are designed to broaden user options in deploying software-defined branch offices and enterprise networks. 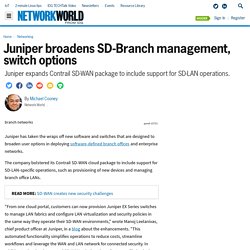 The company bolstered its Contrail SD-WAN cloud package to include support for SD-LAN-specific operations, such as provisioning of new devices and managing branch office LANs. "From one cloud portal, customers can now provision Juniper EX Series switches to manage LAN fabrics and configure LAN virtualization and security policies in the same way they operate their SD-WAN environments," wrote Manoj Leelanivas, chief product officer at Juniper, in a blog about the enhancements. "This automated functionality simplifies operations to reduce costs, streamline workflows and leverage the WAN and LAN network for connected security.

In addition to the cloud-managed SD-WAN solution, these features will also be in the downloadable controller software for optional on-premises deployment. "