Uk.businessinsider. Keys to Finding the Right Startup Mentor for You. 10 Questions to Ask Yourself When Testing a Business Idea. You've got a business idea you're jazzed about, but aren't sure if it's feasible. 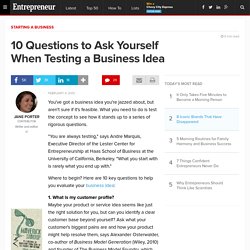 What you need to do is test the concept to see how it stands up to a series of rigorous questions. Steve Blank on Maintaining a Culture of Innovation. Serial entrepreneur-turned-educator and Silicon Valley legend Steve Blank discusses the challenges companies face during the transition from the startup to the expansion stage, and shares his advice for how founders can successfully navigate it while keeping a culture of innovation intact. 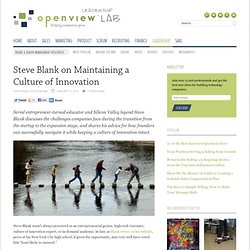 Steve Blank wasn’t always perceived as an entrepreneurial genius, high-tech visionary, culture of innovation expert, or in-demand academic. In fact, as Blank writes on his website, peers at his New York City high school, if given the opportunity, may very well have voted him “least likely to succeed.” Considering all that Blank has accomplished in the last 30-plus years (including being recently listed as one of the world’s “Masters of Innovation” by the Harvard Business Review), it’s safe to say the slacker label didn’t stick. Founder Institute #Startup Accelerator Launching in Rio de Janeiro? The Founder Institute, the World's Largest Startup Accelerator, is currently testing the demand for opening its newest chapter in Rio de Janeiro, Brazil this Autumn. 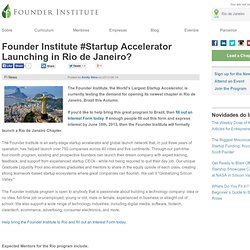 If you'd like to help bring this great program to Brazil, then fill out an Interest Form today. If enough people fill out this form and express interest by June 16th, 2013, then the Founder Institute will formally launch a Rio de Janeiro Chapter. The Founder Institute is an early-stage startup accelerator and global launch network that, in just three years of operation, has helped launch over 750 companies across 40 cities and five continents. Through our part-time four-month program, existing and prospective founders can launch their dream company with expert training, feedback, and support from experienced startup CEOs - while not being required to quit their day job. Help bring the Founder Institute to Rio and fill out an Interest Form today. Expected Mentors for the Rio program include;

Getting into Y Combinator as a single, non-technical founder. By Hamilton Chan On October 29, 2012 Yep, it can be done. 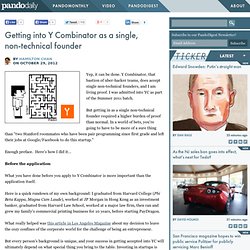 Y Combinator, that bastion of uber-hacker teams, does accept single non-technical founders, and I am living proof. I was admitted into YC as part of the Summer 2011 batch. But getting in as a single non-technical founder required a higher burden of proof than normal. How to Recruit a World-Class Marketer for Your Startup. Many of us have experienced feelings of despair when no one would try our brand new product. 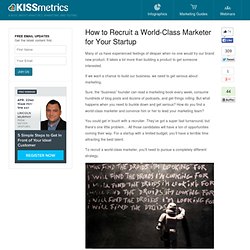 It takes a lot more than building a product to get someone interested. If we want a chance to build our business, we need to get serious about marketing. Step-by-Step Guides for Business. Test startup and product ideas quickly and easily. 90% Of Incubators And Accelerators Will Fail And That’s Just Fine For America And The World. Editor’s note: Peter Relan is a former programmer and Internet executive, as well as a successful serial entrepreneur, Silicon Valley executive, angel investor, and technology veteran for over 25 years. 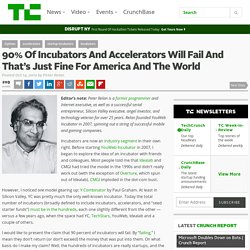 Relan founded YouWeb Incubator in 2007, spinning out a string of successful mobile and gaming companies. Incubators are now an industry segment in their own right. Before starting YouWeb Incubator in 2007, I began to explore the idea of an incubator with friends and colleagues. Most people told me that Idealab and CMGI had tried the model in the 1990s and didn’t really work out (with the exception of Overture, which spun out of Idealab).

CMGI imploded in the dot-com bust. Top 10 SEO Startups of 2012. Socks Are the New Hoodie: A Startup Reinvents Swag. According to Time, IFTTT is one of the 50 best websites of 2012, but their socks are at the top of the swag leaderboard. 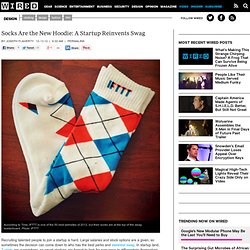 Photo: IFTTT Recruiting talented people to join a startup is hard. Large salaries and stock options are a given, so sometimes the decision can come down to who has the best perks and sweetest swag. Wahooly. Places to Start Acquiring Users. Today I want to respond to the #1 concern I hear from early stage startups: how to get people to find out about your product without having to pay for it. 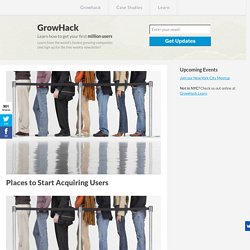 In this post, I’ll cover some of the best growth hacks that I’ve discovered for the acquisition stage of the lean marketing funnel. Here’s how I like to think about it. You can either do the work of acquiring new potential users (HARD), or you can let others do the work for you (EASIER). What do I mean? Put simply, go to where your potential users are. How to name your startup: A 9 month first-hand journey through rebranding. Mexico City Starts Up: Video Tour of @MexicanVC. Mexico City Starts Up: Video Tour of @MexicanVC Welcome to Chihuahua 230 in Mexico City, home of a mishmash of co-working, MexicanVC companies, StartupWeekend Mexico and all good things startups. 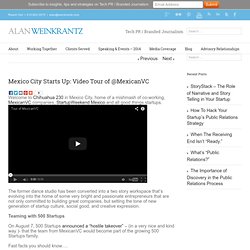 The former dance studio has been converted into a two story workspace that’s evolving into the home of some very bright and passionate entrepreneurs that are not only committed to building great companies, but setting the tone of new generation of startup culture, social good, and creative expression. Teaming with 500 Startups On August 7, 500 Startups announced a “hostile takeover” – (in a very nice and kind way )- that the team from MexicanVC would become part of the growing 500 Startups family.