Minimal resources: Lesson sequences. By Scott Thornbury One of the tricks of teaching with minimal resources is devising ways of making one activity evolve into another, and even another, so that you have a chain of linked activities, none of which involves the use of materials. 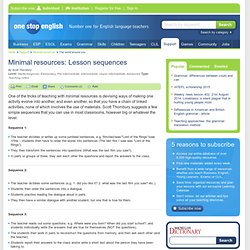 Scott Thornbury suggests a few simple sequences that you can use in most classrooms, however big or whatever the level. Sequence 1: The teacher dictates or writes up some jumbled sentences, e.g. film/last/was/”Lord of the Rings”/saw/I/the – students then have to order the words into sentences (The last film I saw was “Lord of the Rings”).They then transform the sentences into questions (What was the last film you saw?). In pairs or groups of three, they ask each other the questions and report the answers to the class.

Sequence 2: The teacher dictates some sentences (e.g. 1. did you like it? Sequence 3: The teacher reads out some questions, e.g. Minimal resources: The immediate environment. Minimal resources: Photocopy-free grammar practice. By Scott Thornbury Scott Thornbury gives us some tips and ideas for grammar activities that don’t require any photocopying. 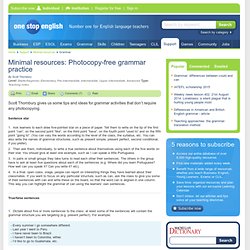 Sentence star Ask learners to each draw five-pointed star on a piece of paper. Tell them to write on the tip of the first point “can”, on the second point “like”, on the third point “have”, on the fourth point “used to” and on the fifth point “going to”. (You can vary the words according to the level of the class, the syllabus, etc. True/false sentences Dictate about five or more sentences to the class: at least some of the sentences will contain the grammar structure you are targeting (e.g. present perfect). One of us/some of us Write the following sentence starters on the board. Grammar: modal verbs 'may' and 'might' 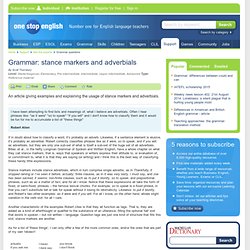 I have been attempting to find lists and meanings of, what I believe are adverbials. Often I hear phrases like: "as it were" "so to speak" "if you will" and I don't know how to classify them and it would be fun for me to accumulate a list of "these things" Robert Allen If in doubt about how to classify a word, it’s probably an adverb. Likewise, if a sentence element is elusive, it’s probably an adverbial. Stance markers include stance adverbials, which in turn comprise single adverbs, as in Thankfully, it stopped raining or I’ve seen it before, actually; finite clauses, as in It was very tasty, I must say, and Joe has been sacked, it seems; non-finite clauses, such as to put it bluntly, so to speak; and prepositional phrases, such as as a matter of fact, and for all I know. 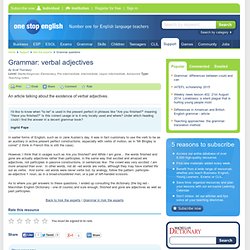 I'd like to know when "to be" is used in the present perfect in phrases like "Are you finished? " meaning "Have you finished? " Is this correct usage or is it only locally used and where? Under which heading could I find the answer in a decent grammar book? Ingrid Pape. Grammar: two-syllable comparatives. By Scott Thornbury An article discussing the usage of comparative and superlative forms of two-syllable adjectives. 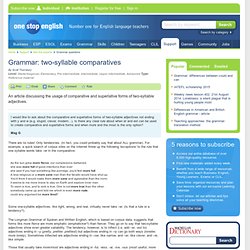 I would like to ask about the comparative and superlative forms of two-syllable adjectives not ending with y and w (e.g. stupid, clever, modern...). Is there any clear rule about when er and est can be used to create comparative and superlative forms and when more and the most is the only option? Mag G There are no rules! Some one-syllable adjectives, like right, wrong, and real, virtually never take –er. The Longman Grammar of Spoken and Written English, which is based on corpus data, suggests that forms like more fierce are more emphatic (emphaticker?)

Those that usually take more/most are adjectives ending in -ful, -less, -al, -ive, -ous (most useful, more mindless, etc) and adjectives formed from participles (more bored, most tiring). Grammar: the verb 'to be' By Scott Thornbury A discussion answer to the question "what is the verb 'to be'? 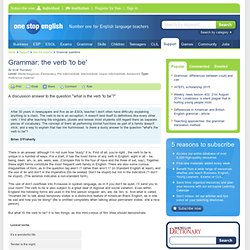 " After 30 years in newspapers and five as an ESOL teacher I don't often have difficulty explaining anything to a class. The verb to be is an exception. It doesn't lend itself to definitions like every other verb. I find after teaching the singulars, plurals and tenses most students still regard them as separate pieces of vocabulary. Brian O'Flaherty There is an answer, although I’m not sure how “dusty” it is. This use of don’t overflows into if-clauses in spoken language, as in If you don’t be quiet, I’ll send you to your room! But what IS the verb to be? Grammar: reporting verb patterns. Grammar: the syntactic function of -ing forms.

By Scott Thornbury An article discussing the syntactic function of -ing forms. 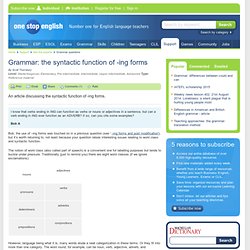 I know that verbs ending in ING can function as verbs or nouns or adjectives in a sentence, but can a verb ending in ING ever function as an ADVERB? If so, can you cite some examples? Bob A The notion of word class (also called part of speech) is a convenient one for labelling purposes but tends to buckle under pressure. However, language being what it is, many words elude a neat categorization in these terms. This is well illustrated in Quirk and Greenbaum’s (1973) A University Grammar of English, where they give examples of how the word painting can be placed at any point on a gradient from totally noun-like to totally verb-like.

A painting of Brown’s… The painting of Brown is as skilful as that of Gainsborough…. Likewise, the difference between participles and adjectives ending in –ing is not always clear cut. Boring, in these instances, passes all the tests for adjectives. Grammar: the article in English.