London In 1927, Recreated Shot For Shot. You might remember this remarkable short film by Claude Friese-Greene, showing the London of 1927 in colour. 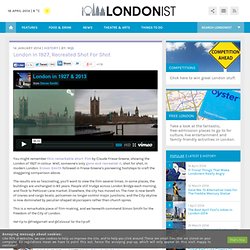 Well, someone’s only gone and recreated it, shot for shot, in modern London. Simon Smith followed in Friese-Greene’s pioneering footsteps to craft the staggering comparison above. The results are so fascinating, you’ll want to view the film several times. In some places, the buildings are unchanged in 85 years. People still trudge across London Bridge each morning, and flock to Petticoat Lane market. Cambridge Parkour POV. Water wonderful world! Photographer captures amazing images in a single droplet. 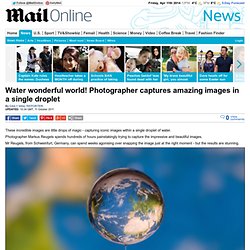 Photographer Markus Reugels spends hundreds of hours painstakingly trying to capture the impressive and beautiful images. Mr Reugels, from Schweinfurt, Germany, can spend weeks agonising over snapping the image just at the right moment - but the results are stunning. The stuff of life: This image of the globe from space looks uncannily true to life when pictured through a droplet of water. Photographer Markus Reugels spends hundreds of hours painstakingly composing these shots. Another world: This image of the moon is given incredible clarity seen through the natural lens created by dripping water. PARIS 1914. Fall. Computer Model Shows a Disk Galaxy's Life History. The ISS "Stacks". NASA captures mind-bogglingly gorgeous solar video.

High performance access to file storage Video Last Friday the Sun put on a magnificent display, ejecting a massive solar filament that was captured by NASA's Solar Dynamics Observatory (SDO) in all its glory. 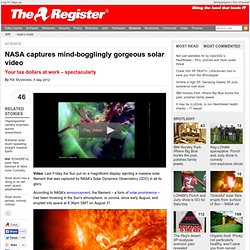 According to NASA's announcement, the filament – a form of solar prominence – had been hovering in the Sun's atmosphere, or corona, since early August, and erupted into space at 8:36pm GMT on August 31. The solar filament eruption of August 31, 2012 (click to enlarge – a lot) The SDO's Atmospheric Imaging Assembly (AIA) produced images of the eruption, which reached a half million miles into space, capturing light at 335, 171, 304 and 131 angstroms. The data from these observations were used to creating the spectacular video that NASA released on Tuesday, the first half showing the images from the 304 and 171 angstrom observations, and the second half being apparently a composite.

The resulting coronal mass ejection (CME) shot through space at 900 miles per second. Paris In Motion (Part I) Lightning captured at 7,207 images per second. 19 of the Most Incredible Photos of Venus Passing In Front of the Sun This Week. I'm Rob, the editor of Light Stalking. 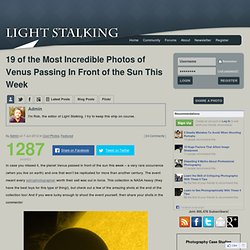 The Longest Photographic Exposures in History - The Latest - itchy i. The tremendous popularity of this article with more than half a million (!) 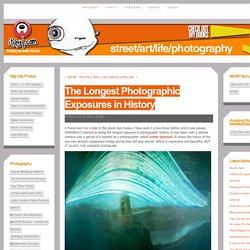 Clicks in one month inspired me to contact the artist Michael Wesely himself. I felt there were questions by readers which I couldn't answer correctly without talking to Michael. And I also wanted to tell him how much his worked was loved and how many people saw it as an inspiration for their own works and lives. From the many comments I learned, that many of you were astonished by the beauty of the images but also by the technical aspects of their making. The fact that the light fell for up to 3 years onto the same negative strip without over-exposing seemed just too unbelievable. But Michael confirmed that he indeed created continuous, uninterrupted exposures over those long periods of time.

Michael Wesely, Palast der Republik, Berlin (28.6.2006 - 19.12.2008), © Michael Wesely, Michael wanted to highlight that he also sees those lines as an indicator for something else. And this is what he was after - details. Midnight Sun. Landscapes: Volume Two. What does it feel like to fly over planet Earth? Time Lapse View from Space. Jeb Corliss " Grinding The Crack". SENSE OF FLYING.

30 years of Space Shuttle history. Locked in a Vegas Hotel Room with a Phantom Flex. Nyiragongo Crater: Journey to the Center of the World. In The Land Of The Northern Lights. The Aurora. Yuri Gagarin's First Orbit - Home Page. Chaîne de firstorbit.